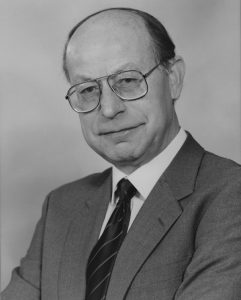 It is with great sadness that we announce the death of Professor Robert Estall, Professor of Geography at LSE until 1989, and an Emeritus Professor thereafter. He was also an undergraduate student at LSE from 1952-55 and completed his PhD here in 1964.

I was extremely sorry to hear of the passing of Emeritus Professor Robert Estall. He was a distinguished geographer, yet always modest.  As a person, he was full of kindness, character and integrity, and I will remember him fondly.

Our paths crossed more than once. Together with the late Professor Emrys Jones he interviewed me for the undergraduate degree in Geography in 1976 when I was 17 years old. The interview was so relaxed and enjoyable that I emerged feeling that I was walking on air! I was subsequently given a conditional offer of two Es at A level – an indication that Profs Estall and Jones had warmed to me, as much as I had to them! I was sorely tempted to take the LSE place but under pressure of parents and teachers, I opted instead to read my undergraduate programme at King’s College Cambridge. However, I was pulled back to LSE, partly because of my recollection of that initial encounter, as well as LSE’s rapidly-emerging distinction as a place to do groundbreaking research in geography in a context of social science interdisciplinarity.

So, I returned to LSE in 1988 as a young lecturer (what would now be ‘assistant professor’),  following a PhD at UCL, a post-doctoral year in Mexico funded by a Leverhulme Trust Study Abroad Studentship, and and 18 months as a lecturer in Geography and Latin American Studies at Liverpool.

As soon as I had been appointed, Professor Estall, together with Professor Bob Bennett, then Head of Department, reached out to ask if I could contribute to the book they were editing on Global Change and Challenge: Geography for the 1990s, which was eventually published by Routledge in 1991, which was to showcase the research of a small contingent of LSE geographers at the time. In the end, my over-long first chapter draft ended up becoming two chapters, which was a real bonus for someone with a limited emerging publication track record! Prof Estall was a patient and judicious editor, meeting with me to discuss and finesse the contributions, and being unfailingly encouraging about my efforts.

I was sorry when he retired officially in 1989, but enjoyed seeing him on several occasions subsequently. He always showed such interest in young scholars, and his passing, like that of the late Professors Michael Wise and Derek Diamond, leaves me feeling bereft of a generation of senior academics who worked well into their retirement to support the Department and the discipline of Geography more widely.  He is firmly locked into my treasure trove of professional and personal memories, and my thoughts go out to the family and friends he has left behind.

This entry was posted in Department of Geography & Environment, Uncategorized. Bookmark the permalink.