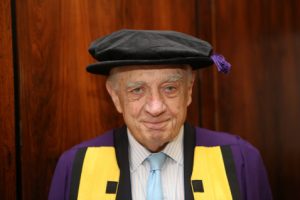 Peter was a big man in every way. He had strong views which he expressed with robust eloquence, he was incredibly quick to pick up sloppy thinking and was always intellectually challenging.

However, what I will remember most about him is his generosity, kindness, compassion and charm. At a somewhat difficult time for the School when I became Interim Director he was always available, generously giving advice, helping us deal with inevitable media interest and providing much needed support to all members of the Director’s Management team.

When Chairing LSE’s Council and Court, Peter could be combative but always in a good humoured way and with the ability to rapidly read the mood of the meeting and defuse tensions. He was a past master at getting difficult decisions made while allowing everyone to have their say. In so many ways Peter was an ideal Chairman, he carefully scrutinized executive decisions and actions, supporting them where properly justified and appropriate but challenging them when greater thought and clarity was required.

Peter was a wonderful man to be with, full of fascinating tales and great wit, and with the ability to make everyone feel that they had something important to contribute. It was a privilege to know him and he will be sorely missed.

Sincere condolences to Maruja his wife and their three children.

It was with great sadness that we learned that Peter Sutherland passed away on Sunday 7 January in Dublin, aged 71. Peter was an extraordinary and inspirational man who was a great friend of the School, and served as the Chair of Council and Court from 2008 to 2015.

Peter had an enormously distinguished career before taking on the this role at LSE. He was appointed as the youngest ever Attorney General of Ireland in 1981, and became the youngest  European Commissioner in 1985 (during which time he implemented the establishment of the ERASMUS scheme). In 1993 he became the first Director General of the GATT/World Trade Organisation, and in 2006 became the special representative of the United Nations on migration issues. He was an honorary  ambassador of the UN industrial development organisation, the Chairman of BP and of Goldman Sachs International and the Financial Adviser to the Vatican. He was appointed Honorary Knight Commander of St Michael and St George in 2004 for services to industry.

Handling the LSE council, Court and Council committees was a new experience for Peter but one in which he took on with enthusiasm, in fact with relish, as he had done with so many challenges before in very different working environments. He wanted to know what made LSE tick and genuinely welcomed the input from all the members of Council, and was as interested in the concerns of the student representatives as much as the views of academics and lay governors. Despite being bemused at times by the issues which aroused passions amongst academics and students, he was always prepared to listen patiently, if occasionally with poorly-concealed amazement, to all opinions and was then able to bring Council to agreement on sometimes difficult and sensitive issues. He was unfailingly supportive  to all the members of the Director’s Management Team and took a genuine interest in all aspects of our work, from student-centred initiatives like the Faith Centre and PhD scholarships to significant new research and financial initiatives. Above all, he showed absolute dedication to the School by devoting an enormous amount of time and energy to steer it through very difficult times.

Peter had an insatiable intellectual curiosity and a formidable intellect. He enjoyed being associated with LSE because he relished academic debate. He had a genuine interest in the academic work being undertaken at the School and made contacts with colleagues across many different disciplines. He was awarded an honorary doctorate at LSE in 2015 in recognition of his exceptional contribution to EU and world affairs. He had a passionate interest in the EU and in migration within the EU and globally. He has left a permanent significant legacy to the School through his establishment of the Sutherland Chair in European institutions held in the European Institute.  After he stepped down as Chair he also retained his connection with LSE by becoming  Professor in Practice  in the Institute of Global Affairs and became the leading figure in the Institute’s Global Migration Initiative. He was also wonderful company with an endless supply of good stories and a gift for the perfect punch line. Peter seems to have met everyone worth meeting during an extraordinary career, and had an insightful comment or humorous anecdote to impart about all of them.

It was a privilege to work with Peter and a joy to be in his company. He truly was one of a kind. The School is greatly in his debt and we will miss him sorely.

3 Responses to Professor in Practice Peter Sutherland, Chair of LSE Court and Council 2008-2015