It is with great sadness that LSE writes in memory of Professor Saw Swee Hock, one of our most eminent alumni, benefactors and Honorary Fellows and Distinguished Alumni Leadership recipient, who died on Tuesday 16 February 2021. 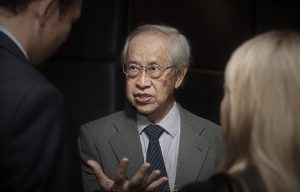 Prof Saw’, as he was so fondly known as across the LSE community, received his BA and MA from the University of Malaya in Singapore (the predecessor to the National University of Singapore), before coming to LSE to study for his PhD in Statistics, which he completed in 1963.

There followed a long and prolific career in academia and public service. Professor Saw’s career included positions at the University of Malaya in Kuala Lumpur, the University of Hong Kong and the National University of Singapore (NUS), from which he emerged as a recognised and respected expert on population and investment management.

Pioneering the study of statistics in many of the region’s most renowned and prestigious universities, Professor Saw demonstrated an impressive and unstinting devotion to his field that continued throughout his life. He held visiting positions at universities including Princeton, Stanford, Cambridge and was a Professorial Fellow at the Institute of Southeast Asian Studies and President’s Honorary Professor of Statistics at NUS.

In an article in 2012 for LSE’s supporter magazine, Impact, Professor Saw reflected on his time at the School and sharing this with his wife who was also studying in London at the time. Professor Saw remember this as “one of the most significant events of my life”. Citing the high level of academic rigour and excellence that he encountered at LSE as “preparing him well to pursue a career in academia.”

Professor Saw’s commitment to education continued through his philanthropy, notable towards his alma maters. In the past decade Professor Saw bestowed extraordinary gifts to LSE. As a result of Professor Saw’s donations, The LSE Saw Swee Hock Student Centre opened in 2013 and the LSE Saw Swee Hock Southeast Asia Centre, a multidisciplinary Research Centre founded in 2014, are named in recognition of his outstanding generosity. His support of some of the most distinguished scholars from LSE to study at the School is also a significant part of his legacy. These tremendous pillars of support across teaching, research and community will have lasting impact for generations to come.

Professor Saw’s association with LSE spanned over 60 years, he was highly revered by the LSE alumni community in Singapore and admired by LSE faculty and students alike. It was a great honour for the School to recognise Professor Saw as an Honorary Fellow in 2006 in recognition of his illustrious academic career and his transformative philanthropy. He also received LSE’s inaugural Distinguished Alumni Leadership Award in 2015.

Professor Saw’s generosity has impacted many generations of students and faculty and will continue to do so for years to come.  We will be eternally thankful to call Professor Saw an alumnus of LSE. We will remember his extraordinary modesty, warmth, kindness, judicious insight and, of course, the glint in his eye with his wonderful sense of humour and the laughter that always followed. Prof Saw will be deeply missed. Requiescat in pace et surget in gloria.

A private family funeral will take place in Singapore on Thursday 18 February.

Professor Saw Swee Hock is survived by his wife, Cheng Siok Hwa, daughters Seang Mei and Seang Pin, his son, Seang Kuan, and five grandchildren. Our thoughts and prayers are very much with them at this time. When circumstances allow, we look forward to appropriately honouring Professor Saw’s life and contributions to LSE, both on campus and in Singapore.