In memory of Stephen Dunn

Posted on April 4, 2022 by Internal Communications 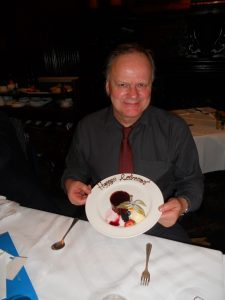 It is with great sadness that we inform you of the passing of Stephen Dunn, who died on Tuesday 29 March 2022. Our deepest sympathies are with Stephen’s family.

Stephen joined LSE as a Lecturer in the Department of Industrial Relations in 1985. Steve (as he was known) was a wonderful writer, colleague and teacher. Steve graduated from Oxford in history before moving into the field of industrial relations having experienced it first hand as a shop steward in the Bowyers meat processing factory in his hometown of Trowbridge in Wiltshire. Steve became an expert on closed shop, publishing The Closed Shop in British Industry (London: Macmillan) in 1984 with John Gennard. He published extensively in the 1980s and 1990s on the closed shop and other British industrial relations issues such as the content of British collective agreements (Dunn and Wright 1994), employee share options (Dewe, Dunn and Richardson 1988) and the legacy of the Donovan Commission (Dunn 1993). Later he developed an interest in industrial relations in South Africa via his former PhD student Eddy Donnelly, publishing on post-apartheid industrial relations (Donnelly and Dunn 2006).

Steve’s flair for writing was legendary. As Sir David Metcalf, Emeritus Professor and former head of LSE’s Department of Industrial Relations, put it, Steve “wrote like a dream.” Punchy openings and ringing phrases were Steve’s trademark. He advised colleagues “never to start an article with the letter ‘T.’”  The implication was to avoid beginnings such as “This article will argue…” and try something more arresting – perhaps something like “Love it or loathe it,” the phrase with which Steve began his article on strikes in essential services for the Employment Policy Institute. Even Steve’s lecture notes were written with panache.

Colleagues remember Steve as sociable and supportive. Rafael Gomez, Director of the Centre for Industrial Relations and Human Resources at the University of Toronto, recalls, “Stephen was a real support to me in my first year at the LSE. I was young, alone, living outside of Canada for the first time and he was really generous with his time.” He was also a fount of knowledge regarding industrial relations. Steve’s deep and broad knowledge was an invaluable resource for colleagues. As Sir David Metcalf noted, “you learnt so much talking to him.” Conversations with Steve were always thought-provoking, often involving passionate debate as well as humour.

Steve was equally inspiring as a teacher. He paced the room, drawing on his reserves of knowledge to extemporise. The results were often brilliant and never dull. He always had time for students, dedicating long hours to supervision of dissertations and links projects. He also took great care with feedback and his role as personal tutor. Former students such as Verity Lewis, an alumna of the Industrial Relations undergraduate programme, remember his kindness in the days when the undergraduate programme was small and dominated by the department’s MSc programmes.

Steve retired in 2012, departing LSE on a high note. Professor Jackie Coyle-Shapiro, then head of the EROB group of the LSE Department of Management, organised a seminar and dinner to honour Steve’s work. It was an exceptionally well-attended and inspiring event at which the affection for Steve was palpable.  Steve, typically modest, had said he didn’t want any speeches, but blushed with delight as he listened to his colleagues’ appreciation.  As Professor Jackie Coyle-Shapiro notes “Steve had much more impact on colleagues and students than he was aware of.  His humility and generosity were remarkable; his flair for writing was unique.”

Steve’s colleagues are deeply saddened by his death. It was a joy to work and be friends with him. He will be greatly missed.

25 Responses to In memory of Stephen Dunn