Posted on October 18, 2022 by Internal Communications 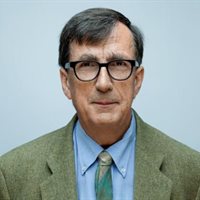 It is with great sadness that we share the passing of Bruno Latour, who had a long–standing association with the LSE. This began with his position as a Visiting Professor in the Department of Information Systems (1997–2000) was followed by a part–time Centennial Professor position (2013–2015). Here, Edgar Whitley, who helped facilitate his first visiting position at LSE, remembers the person as well as the scholar.

I first met Bruno at an Information Systems conference in Cambridge in 1995. He was one of the keynote speakers and his talk was accompanied by a paper reflecting on social theory and the study of computerized work sites. Written with typical Latourian insight and humour, the paper starts with a detailed description and deconstruction of a “program of action” based around the protagonist, Hélène, and her friend Adam arranging to meet in London. It also includes asides about possible reasons for the different time zones between Britain and the Continent, the (lack of) investment in British railways and a reflection that the name of the location where they were meeting, the Eurotunnel Gate at Waterloo station, is “not such a nice label for welcoming a French woman”.

Following conversations at the conference the possibility of a visiting position at LSE was discussed the School eventually agreed a visiting appointment in Information Systems. This resulted in Bruno making weekly trips (via Eurostar to Waterloo) to spend time at LSE.

At first sight, the idea of a trained anthropologist and sociologist of scientific practice being based within information systems might not have seemed an obvious choice. However, there are strong resonances between the socio–technical approach to studying information systems and Bruno’s exploration of the hybrids of nature and culture in his 1993 book “We have never been modern”. These resonances continue to influence debates in the study of information systems. His visiting position also meant that he more explicitly considered the role of information technologies alongside the scientific practices in some of his later writings.

As part of his appointment, Bruno gave two courses open to anyone in the School (and beyond). The first, “The Politics of Nature” (later called “Nature and Society: The contribution of science studies”) was an open, unassessed lecture course allowing him to develop arguments that became the basis for his 2004 book of the same name. The relationships between nature and society continue to be seen in his more recent ecologically focused work. The second “Information Systems or Networks of Transformation” (later renamed as “Regimes of Enunciation: A critique of pure information”) was available as an assessed course but was also open to PhD students at LSE. I particularly recall his sense of excitement when he arrived in London one week having (re)discovered the work of Gabriel Tarde, work that he later claimed foreshadowed much of his own thinking.

Alongside his teaching responsibilities, Bruno took full advantage of the academic environment at LSE and each week would look through the (printed) guide to LSE Experts to find interesting like–minded colleagues to meet during his weekly visits to London. In this way he engaged with colleagues studying legal theory, accounting and anthropology and participated in events organised by the European Institute and the Department of Sociology. In 1999 he hosted a first interdisciplinary workshop based on his colleague Michel Callon’s book on the Laws of the Markets (1998).

His time in London overlapped with the so–called “Sokal affair” and in 1998 LSE hosted a public debate between Latour and Sokal. On the day of the debate, Bruno invited Alan Sokal for lunch at the LSE Staff Dining Room and brought along a bottle of his family’s famous burgundy wine as a gift. I’m sure this typical gesture of collegiality helped ensure the actual debate ran more smoothly than it might have done, given the very different intellectual positions of the two panellists.

Bruno’s time in London wasn’t just spent on teaching and research and he regularly joined us for drinks after work in the Beaver’s Retreat or arranged for a group of friends to go with him to the theatre to see plays like Michael Frayn’s Copenhagen. His offer to refund the cost of the tickets I had bought for these shows with wine was always appreciated (and taken up).

In June 2000 I joined Bruno at a midsummer workshop in Tromsø on Actor–Network Theory and IT organised by Norwegian colleagues. One of the social events for the workshop was a trip where we all tried our hand at fishing for cod and I have fond memories of the varying degrees of success we had in this endeavour.

For the workshop I was asked to give a short presentation of how I was using some of Bruno’s ideas in my own work and that simple request ended up shaping a whole portfolio of research as I sought to better understand the role that technology actors play in the development of policy initiatives like digital identity. More recently, I could see how the challenges that politicians would face when claiming that they were just “following the science” in responding to the pandemic were foreseen by Bruno’s deconstruction of what we understand by science and society / facts and values.

At LSE as elsewhere, Bruno was always particularly supportive of PhD students and junior faculty, particularly as they engaged with his ideas. For example, Amany Elbanna recalls: “Professor Latour taught me to live not only a life of sociological and anthropological observations of all humans and non–humans but also a life of reflection. I remember him sitting at the LSE’s restaurant for an hour–long hot lunch sipping a small glass of wine and inviting us PhD students to join him. He did not approve of us just eating a sandwich in 15 minutes and going back to work as we used to do. He invited us to reflect more on what we do and the observations we make. He was talented in simplifying concepts and drawing ideas on the board, so we could get a visual understanding of the complex connections he was making. I continued to email him after the LSE course and he was always generous and willing to experiment with new challenges in the world of IT and how we can explain them. With all the books and papers he wrote, he will certainly never die but I will miss him catching up with new topics”.

Mary Darking, who particularly enjoyed his writing seminars, recalls: “Bruno was a true egalitarian. No matter how eminent the company, he always made time to warmly greet and speak with his students. He was our (somewhat) Socratic Professor and through his intriguing teaching method he empowered us to push convention aside and forge our own pathway through our chosen empirical wilderness. His sense of humour was a joy. I will never forget him commanding us, at the top of his voice, to put down our ordinary spectacles and “put on your virtual reality goggles [which he pronounced ‘googles’]”. For weeks we followed his instruction—“just describe”—sharing our descriptions with one another, spotting the tropes and clichés we had reproduced and learning to look beyond them. It was co–learning at its best”.

Peter Erdelyi writes “Bruno Latour’s generosity towards students was legendary and we were absolutely thrilled when he agreed to participate in an event a group of Information Systems PhD students organised in 2008, sharing with us his latest thinking and helping us work out our own intellectual quandaries. He will be greatly missed and remembered with affection by generations of former and current students”.

Bruno’s links with the School continued with his Centennial Professorship and I occasionally bumped into him in the corridors of LSE. Always generous with his time, these accidental meetings ended up being longer conversations and catch–ups and reminded me of how influential his thinking had been on me. Indeed, ideas and insights he shared continue to shape my approach to research and life as well as those of my colleagues.

With his death, the LSE community loses both an influential, inspirational and provocative thinker but also a dear friend and colleague.