At a recent Seminar at the left-of-centre London think tank, the Institute for Public Research (IPPR), the former British foreign minister, Jack Straw called for the abolition of a directly-elected European Parliament. Instead he advocated a return to an indirectly elected assembly, composed of representatives chosen from the 27 national parliaments (the arrangement that applied until 1979). This is not a new idea, but it is certainly a surprise to hear this argument coming from a senior and pro-European British politician – someone who has held top UK Cabinet positions for many years, including being Home Secretary and Foreign Secretary. Straw’s comments quickly sparked a flurry of counter-arguments in the Guardian.

I was sharing the platform with Mr Straw at the same IPPR seminar and so immediately made the case that his comments were unfair. The European Parliament is still a very new institution in politico-constitutional terms, and it takes time to create a strong connection between European voters and MEPs. One certainly should not extrapolate from the lack of accountability of MEPs in the UK (where they are little known by the public) to all the other member states. I also said that going back to the pre-1979 model for the European Parliament would make the democratic deficit problem far worse, rather than better.

First, it is easy to forget how ineffectual the previously indirectly elected European Parliament used to be in the 1970s. National MPs are far too busy doing national politics to want to spend much time doing EU politics as well. This was a major problem before 1979, when only second-rate national politicians volunteered for the extra work in Brussels and Strasbourg. It would be much more of a problem now because of the expanded policy agenda of the EU, the extensive legislative powers that the European Parliament now has, and the expansion of the EU’s single market and political institutions to cover 27 countries and 500 million citizens.

These days the European Parliament has to scrutinise and amend 150 to 200 pieces of legislation a year. It oversees an annual budget of more than 120 billion Euros. It monitors the activities of the Commission and its many Directorate-Generals. It interacts regularly with the European Council. MEPs monitor and hold accountable the European Central Bank and all the EU agencies. The Parliament also responds to numerous requests from citizens, interest groups, governments, political parties, journalists, trade associations, industries, trade unions, civil society organizations, and national politicians and civil servants about EU affairs for information; for the opportunity to contribute to policy-setting debates and enquiries; and for help in getting diverse issues and viewpoints onto the EU’s many different policy agendas.

Table 1 gives a more in-depth look at how the European Parliament performs in comparison with the UK’s House of Commons. The first three rows show that the European Parliament passed six times as much legislation as the UK’s House of Commons, and held 17 times as many roll call votes. One small indicator of popular regard is that it also received many more Facebook likes than the Commons. However, on other dimensions Westminster MPs asked many more questions of ministers than their European counterparts, and performed more strongly on other social media indices. (Keep in mind too the number of constituents for the European Parliament is eight times greater than for Westminster). 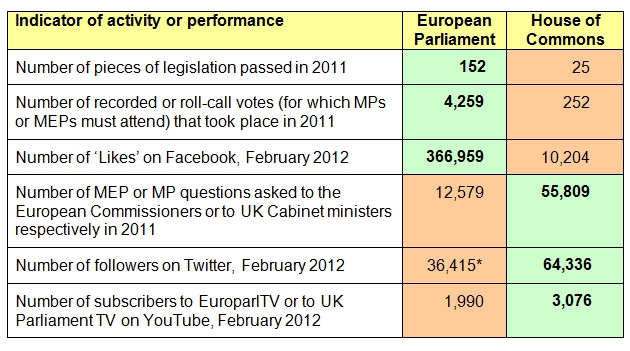 These indicators are only straws in the wind, and political scientists certainly need to consider how a more comprehensive ‘dashboard’ of parliamentary activity might be devised. But surely these few numbers already show that it is inconceivable to think that any national MP would have the time, energy or expertise to carry out the Euro-level representative roles any better than the current MEPs. Most MEPs are highly motivated, attending all committee meetings in Brussels and plenary votes in Strasbourg.

Second, MEPs do a pretty good job of holding the governments in Council and the Commission to account, and acting as a brake on policy-making and legislation. Time and time again the European Parliament has improved laws that were poorly drafted by the Commission; blocked amendments to laws inserted by governments to try to protect particular vested interests; and changed legislation to protect the interests of European-wide consumers or employees. Approximately 25 per cent of the amendments to legislation proposed by the European Parliament end up as law, which is considerably more than any national parliament in Europe. It is especially impressive compared with the UK, where majorities at Westminster are often whipped into line to vote for unamended government bills.

One recent example of the positive effect of the European Parliament was the renegotiation of the SWIFT agreement between the USA and the EU in 2010.  European governments had signed off on a deal with the United States to share information on all European citizens’ financial transactions with the US Department of Homeland Security.  Not one of the 27 EU governments saw any problem with the agreement!  Thankfully, the European Parliament threw out the agreement on the grounds that the deal committed the European Union to share data with the US authorities about EU citizens’ transactions that the US government is not allowed to obtain about its own citizens under US law.  My bet is that national parliamentarians – who are beholden to their national governments – would have rolled over and supported their governments.

One root of problems here is media coverage. It is not the fault of the MEPs that citizens or national politicians aren’t aware of what the European Parliament does.  It is more a fault of national politicians and national media outlets – like the BBC – who refuse to spend any time covering what goes on in day-to-day politics in Brussels.

Another important origin of weak voter linkages to the UK’s MEPs probably had more to do with the way MEPs are elected in the UK than the way the European Parliament works.  Since 1999 British MEPs have been elected by a form of regional party-list proportional representation (PR), where voters can only choose between parties and connect choose between individual politicians – known as ‘closed list ‘ PR since the parties alone determine in which order their candidates are elected.

This closed list PR system provides no opportunities or incentives for individual candidates MEPs to campaign directly to voters.  Most other EU member states – such as Ireland, the Netherlands, Belgium, Italy, Sweden, Denmark, Finland, Slovakia, Slovenia, Latvia, Lithuania, Estonia and Malta – use a form of proportional representation which allows voters to also choose between candidates from the same political party, known as “open list PR”.  When politicians from the same party have to compete with each other for votes in this way they invariably spend more time campaigning directly to citizens.

Professor Simon Hix – LSE Government
Simon Hix is Head of the LSE Department of Government and co-editor of the journal European Union Politics. Simon has extensive consultancy experience, including for the UK Cabinet Office and Foreign and Commonwealth Office, the European Parliament, the European Commission, the European Policy Centre, and has given evidence to the European affairs committees in the House of Lords and House of Commons. He has written several books on the EU and comparative politics, including most recently “What’s Wrong With the EU and How to Fix It” (Polity, 2008).  Simon is also a Fellow of the British Academy.