Following the weekend’s elections, Italy now appears to be facing a hung parliament, with a centre-left majority in the Chamber of Deputies and a fragmented Senate. The real winner writes Valentino Larcinese, has been Beppe Grillo’s 5 Star Movement, which gained 25 per cent of the vote. He argues that the movement’s success illustrates that austerity is now becoming politically unsustainable within the country.

The Italian election delivered a hung parliament. The centre-left coalition led by Pierluigi Bersani came first (although barely) and secured a solid majority in the lower chamber, but lost all of the key battlegrounds in the Senate, hence falling short of a majority by approximately 40 senators in the upper chamber. The bad news is that Prime Minister Mario Monti’s coalition, a potential ally of Bersani, has had a very bad election and only obtained 18 senators. Hence, an alliance between Bersani and Monti is far from enough to form a government. Politically, this is a defeat for German-imposed austerity, represented by Monti and by the parties that have supported him. Silvio Berlusconi, thanks to his propaganda machinery, has managed to play the anti-austerity card, but he has certainly not managed to fully distance himself from the disasters caused during the last 12 years: his own People of Freedom party has not collapsed, as some had naively expected, but has nevertheless lost more than 15 per cent of its vote share compared with the 2008 election.

The winner of this election is undeniably ex-comedian Beppe Grillo, whose 5 Star Movement has received one vote for every four cast this weekend: this is not bad at all for a party at its first ever general election. He has certainly been the most vocal of the anti-austerity candidates, openly calling for a referendum on the euro. This makes even clearer, if necessary, that austerity is not only failing economically and fiscally, it is now becoming politically unsustainable. Italy is still a strong manufacturing country and will not stand still while its industry is dismantled to the advantage of German competitors. Unless this message is received in Berlin, it will be hard to avoid a Eurozone disaster.

The fragmented Senate (probably together with the chaotic sequence of contrasting results) has led most commentators to proclaim that Italy is ungovernable with this parliament. I disagree. Mr Bersani, although barely, has won the election and has the duty to try to form a government. What is clear instead, is that any potential government must involve either the 5 Star Movement or Berlusconi. The latter possibility would be a disgrace for Italians as it should be now clear to any sane person that Berlusconi is an unreliable ally and that no real reform would be possible. A condition for any alliance with Berlusconi would be the preservation of his media empire, something Italians cannot afford any longer. Besides, this would be political suicide for the Italian left.

A better alternative would be to try to form a coalition between the centre-left and the 5 Star Movement in order to make some fundamental institutional reforms before returning to the polls. First of all it would make no sense to vote again with this electoral law. Second, we need an antitrust law for the mass media to ensure greater pluralism in public debate. Third, it should be possible to make important savings on the costs of politics and public administration, particularly at the local level, for example by abolishing the provinces and transferring their few functions to regions and municipalities.

It should not be hard to strike an agreement with 5 Star MPs on these themes and prepare the ground for another election to be held within a year or two, with a better electoral law and increased media freedom. This is a great opportunity to make those reforms that could finally help the country to overcome the dark years of Berlusconi. The 5 Star Movement should be pressed on these issues; they now have serious responsibility and an opportunity for change and should not waste this in the name of short term political opportunism.

Valentino Larcinese – LSE Government
Valentino Larcinese is a Reader in Public Policy at the LSE. His main research interests concern democratization, electoral competition, and the role of mass media in advanced democracies. He has written several research articles on public policy and politics in Italy, UK and USA. You can follow him on twitter: @vlarcinese 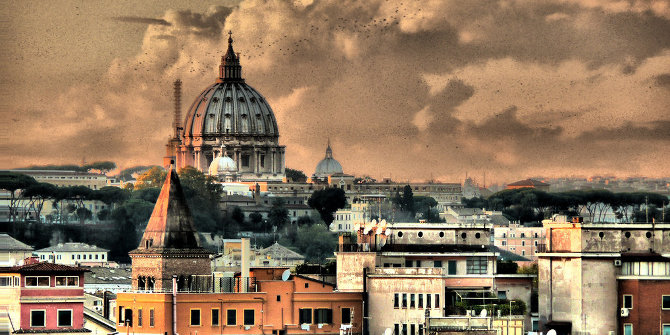