The outlook for several European economies has improved over the last year, following the deep recessions experienced across Europe during the financial crisis. Terence Tse and Mark Esposito write that while there has been some progress, the key problem in EU states is still a lack of competitiveness. They argue that promoting investment should be a key priority and that targeting productive areas of EU economies, including those in the periphery, would go some way toward solving the problem.

We are currently at the beginning of a crucial year for the EU. While we are still struggling with the ongoing Eurozone crisis, European Parliament elections will be taking place this coming May. This means that work is already winding down and the new EU machinery may not be running in top gear until 2015. With EU countries still potentially requiring rescue and austerity programmes, the EU’s competitiveness may further deteriorate.

What to do and what not to do to build competitiveness

But this does not have to be the case if the EU and national governments turn their target to raising competitiveness. Contrary to what many people believe, the fundamental trouble of the Eurozone is much less about heavy debt – both the US and Japan are more indebted – it is its inability to compete effectively. As several of our colleagues have previously pointed out, enhancing productivity through innovation is the only way to restore competitiveness. And the EU has to do more – much more – on this front.

The German model may be where to start the disruption. As mentioned in a previous EUROPP article, Germany’s current strong performance is more due to its past labour. It has not been investing nearly enough to build up its future competitiveness. Indeed, Germany seems likely to undo some of its past reforms, which would only hamper its ability to compete effectively, especially in the long term. At the same time, over-dependence on the German model has ‘demonised’ the economies of the south of Europe, and it does not help to keep criticising them today, while expecting them to stand on their own feet tomorrow.

We should instead celebrate their successes. And there is no shortage of reasons to do so. There are many ‘fast-expanding markets’ – fast growing but hidden pockets of excellence – in these countries. For example, Spain has been highly successful at moving up the value chain by turning more of their agricultural products into organic ones, thereby moving away from competing on price to competing on quality.

Successful stories can also be found in Greece: the country has been churning out high-tech ventures including Sboing and Taxibeat. Italy, on the other hand, has been producing carbon-fibre chassis for racing car manufacturing near Palma. If we want to get the peripheral countries to be prosperous again, we should start helping, and not suffocating them. The Chart below shows the extent to which the Southern economies have relied on domestic investment in capital formation – while states in the rest of the EU have relied more heavily on foreign direct investment. 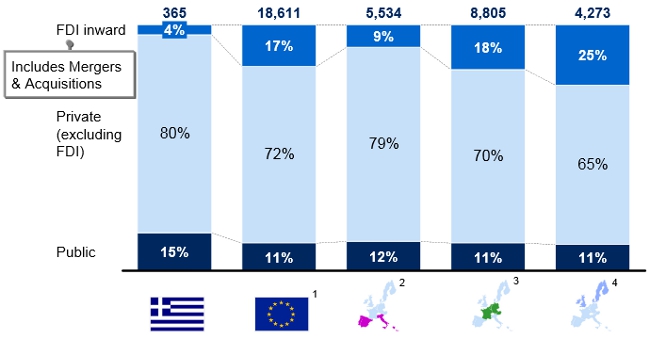 As the attention gains re-balancing, a competitive EU would need to look at Small and Medium Sized Enterprises (SMEs) to run the engine of growth and act as the sources of new jobs. They can only flourish if the EU and national governments create a suitable environment for them to grow. Ironically, even in the absence of help from national governments, we can expect the number of SMEs in the EU to go up substantially in the next couple of years. However, this has less to do with people’s entrepreneurial flairs, and more to do with the lack of job opportunities. As a consequence of the difficult job market many EU citizens, especially those aged between 18 and 24, have turned to starting their own businesses instead. The trap here is that policy-makers would become complacent (again) as the unemployment rate comes down. What they may miss is that small companies will remain small – and therefore inefficient – as they cannot scale up in the current rigid and costly business and regulatory environments.

The European Commission has been working hard to find new ways to give greater access to capital to Europe’s companies, especially SMEs. While the banking union, when completed, will help banks become healthier – and therefore more able to lend – by itself this is insufficient. Finding new financing sources, such as crowd-funding and promoting competition among banks, as the EU government has been trying, would certainly help. But neither of these would give the instant boosts that capital-starved businesses require.

The EU should therefore redouble their efforts in attracting and convincing foreign investors. This does not mean more trade missions to China – these often benefit large companies. What is more important is to convince investors that there remain a great number of businesses in the EU that they can put their money in, even in the peripheral countries. This is one reason for making the fast-expanding markets in the weaker economies more visible to investors. While it is true that there are plenty of Americans and Asians considering investment in European companies, and while it is also true that Germans tend to save a lot; at present most prefer to invest their money outside of the EU. Therefore the first step is for the EU to change people’s perception of itself and promote both what it can do and what it is good at.

With the elections in May, the EU is about to undergo a period of transition, but it cannot afford to slow down. Failing to act would not only leave the EU to become increasingly less competitive, it would also nurture future problems further down the road. While the sovereign debt problem has been defused to some extent, corporate and household debt levels have the potential to generate new concerns. Moreover, there are already talks about using credit – which can only add more debt to households – to boost consumption in order to reboot national economies.

If EU policymakers continue to do little to raise our competitiveness, Europe would not only be falling further behind its global competition, it could also end up generating another crisis. There is no guarantee that the EU can survive the next one.

Mark Esposito – Grenoble Graduate School of Business / Harvard University Extension
Mark Esposito is an Associate Professor of Business & Economics at Grenoble Graduate School of Business in France, an Instructor at Harvard Extension School, and a Senior Associate at the University of Cambridge-CPSL in the UK. He serves as Institutes Council Co-Leader, at the Microeconomics of Competitiveness program (MOC) at the Institute of Strategy and Competitiveness, at Harvard Business School. He is also the Founding Director of the Lab-Center for Competitiveness. His full profile can be found at www.mark-esposito.com and he tweets as @Exp_Mark