Expert surveys are a prominent way of measuring the positions of political parties on a number of policy areas and dimensions of political competition. In essence, expert surveys ask country experts to place parties on various ideological and policy-specific scales. However, while the use of expert surveys in the study of European politics is widespread, this method of obtaining party positions, of course, is not without its critics. A prominent concern is the question of cross-national comparability, a concern that also affects other measures of party positions, such as voter placements and manifesto data.

Put simply, how do we know that expert respondents in Germany think about and apply important concepts in politics, such as economic left-right assessments, in the same way as expert respondents in Sweden? We know that the policy output in some countries is more left-leaning than the policies of other countries, and therefore have reason to suspect that these different political frames may systematically affect the way expert survey respondents use the economic left-right scale. How do we know that a centrist score (5) in Sweden would be considered a centrist score in the UK or Poland?

In a recent article in The Journal of Politics, we addressed these questions by combining innovations in survey methodology with scaling techniques to place European parties on a common ideological space, which produces a cross-nationally comparable measure of the economic positions of European parties. To establish anchors for cross-national comparability, we created a series of vignettes in the 2010 round of the Chapel Hill Expert Survey (CHES) on party positioning in Europe.

The vignettes depicted the economic position of three ideal-type hypothetical parties, one distinctively left, one centre-right, and one to the economic right. As we describe in more detail in the article, the expert placements of the vignette parties allow us to use scaling techniques to identify and adjust for cross-contextual differences and generate placements (with uncertainty estimates) for the actual political parties of Europe on a common left-right scale. The key figure is shown below. 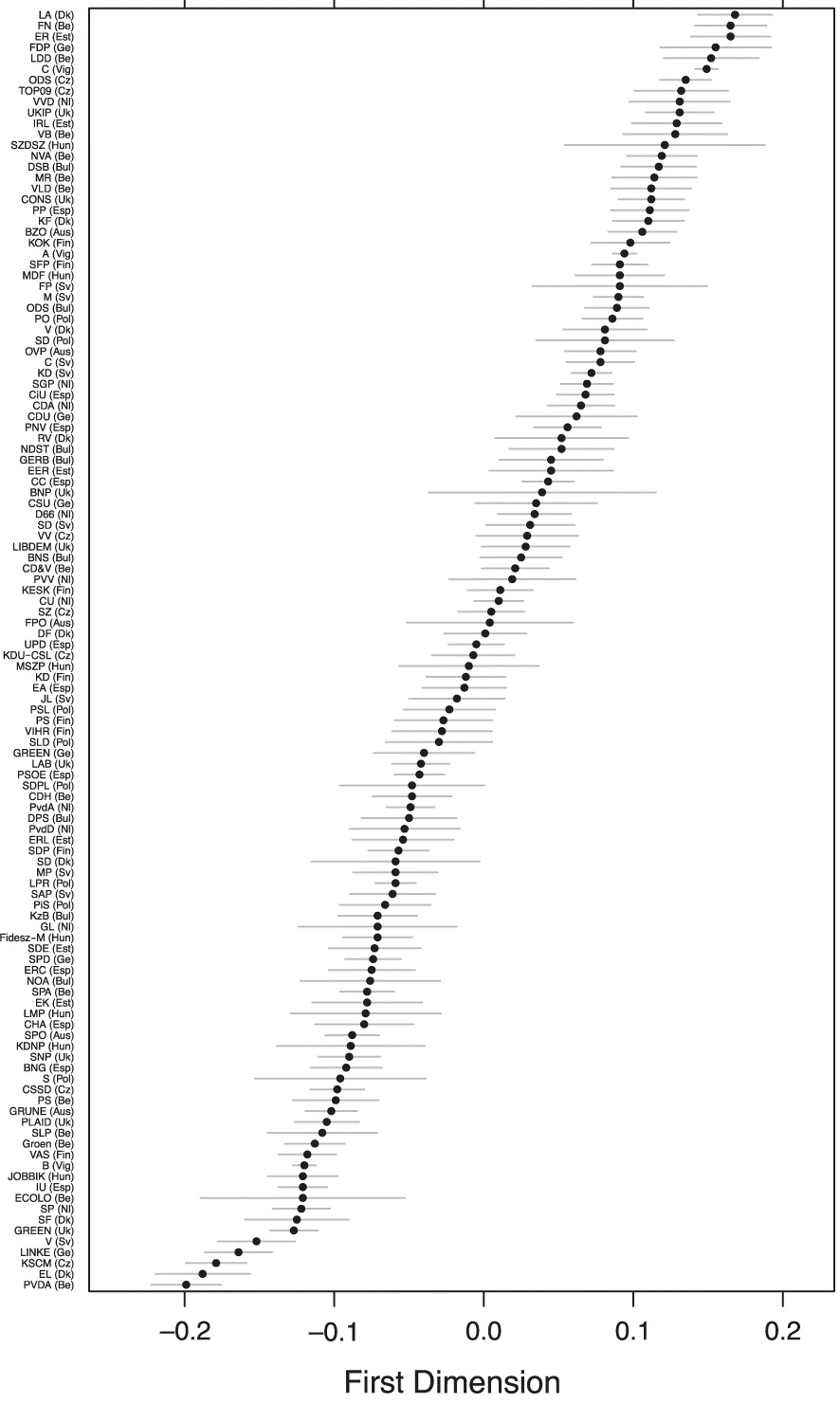 Note: The figure is reproduced with the permission of The Journal of Politics. The whiskers around the estimate represent bootstrapped standard errors. The figure indicates the position of parties on an economic left/right scale. For details of the technique, see the authors’ journal article. Source: 2010 Chapel Hill Expert Survey data; authors’ calculations.

This new measure allows us to place parties from 14 eastern and western European countries on a single ideological scale with more confidence in their cross-national comparability than ever before. This scale allows us to identify the German Free Democrats (FDP) as being among the most economically right-wing and the Swedish Left Party (V) as among the most left-wing parties. In addition, we know that experts have the most uncertainty about the economic positions of parties like the British National Party, which makes sense because the BNP cares far more about immigration than it does about having a clear economic position.

Significantly, the scaling routine returns an interval-level measure of economic left-right party position that can be used for analyses that rely on comparisons of party ideology across countries, such as the making and breaking of party groups in the European Parliament. In addition, the scaled party positions presented in the figure above correlate strongly with the unadjusted mean placements provided by the CHES data. This means that CHES experts in different countries conceive of and apply the economic left-right scale similarly.

This, in turn, enhances our confidence in the comparability of earlier waves of the CHES where we cannot retroactively apply anchoring vignettes. We are therefore now able to say with greater certainty, for example, that the German Social Democrats are to the left of the Spanish Socialist Worker’s Party, and can do so over the four (soon to be five) waves of the CHES data.

The results of our research are encouraging for the use of expert surveys as a means of generating comparable data on the economic left-right positions of political parties in Europe. Experts in various contexts appear to be using this economic left-right scale similarly. However, the economic left-right scale is certainly not the only relevant dimension of political competition in Europe. Numerous research teams have identified a distinct cultural dimension that is of increasing relevance to European politics. Thus, in future work, we will extend our common space scaling approach to the more diffuse and complex non-economic dimensions of political competition.

In addition to the extension to other dimensions, the 2014 version of the Chapel Hill Expert Survey is also noteworthy for its expansion beyond the borders of Europe. By the end of 2015, scholars of industrialised democracies will now be able to find information on the party positions for OECD countries like Canada, the United States of America and Mexico. In the process, this will allow us to address ongoing questions of transatlantic politics such as the placement of the U.S. Democrats relative to European political parties. Is it true that U.S. Democrats take similar economic positions as European Christian Democrats? The 2014 CHES will soon shed light on this and other questions.