The fall of Viktor Yanukovych’s government in February 2014, and the subsequent Russian annexation of Crimea and civil war in eastern Ukraine, marked the beginning of an enduring standoff between Russia and the West. Two years on, Alexander Tabachnik assesses what the legacy of the crisis has been for Russia, Ukraine and the West.

Two years ago, after the fall of Yanukovych’s pro-Russian government and the formation of the new pro-western government in Kyiv, Russian forces seized Crimea and instigated conflict in eastern Ukraine. In response, the West imposed strict economic and political sanctions on the Russian Federation. The purpose of this response was to force Russia to halt its occupation of Crimea and to stop Russian support for the separatist forces in eastern Ukraine.

In reality, the stagnation of the Russian economy began in 2013 before the imposition of sanctions and the oil price drop, which gives an indication of the serious structural problems now present in the Russian economy. An additional factor which is weakening the Russian position is the technological dependence of Russia on the West, particularly in the sphere of oil production. But while Russia is weak economically, it still possesses significant military power. Russia is demonstrating that it has impressive military and organisational capabilities in Ukraine and Syria, while also highlighting that it will not hesitate to use force to promote its interests.

Russia has also demonstrated its capacity to use new forms of modern weaponry. Many western analysts and officials have been left surprised by Russia’s military capabilities. However, at some stage Russia’s current state of economic weakness will also start to influence the country’s military power. Russian military spending has already dropped from 88.4 billion US dollars in 2013 to 66.4 billion dollars in 2015 – a significant decrease of about 25 per cent during these two years.

Moreover, Russia has been burdened by a number of additional expenses. Russia will have to provide economic resources for those parts of the Donetsk and Luhansk regions which are controlled by pro-Russian militants. Additionally, Russia is providing significant economic support for Crimea, Abkhazia, South Ossetia and Transnistria. According to Stratfor, Russia is spending at least 5 billion dollars per year on these causes and this spending is expected to rise. With time, the pressure of these expenses on the country’s budget will increase.

Despite the economic impact of the West’s sanctions, efforts aimed at fostering domestic opposition to the Russian government have been far less successful. There have not been any meaningful anti-government protests in the country and a significant proportion of the population continues to support Vladimir Putin and his foreign policy. The West, rather than the government, has tended to take the blame for the difficult economic situation. Survey evidence suggests a significant part of the Russian population places greater emphasis on the country having a high level of status in comparison to the United States than they do on their economic wellbeing in the short-term. In the medium and long-term, however, this may change. 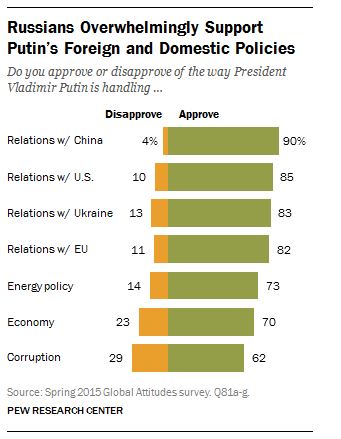 Putin has nevertheless undertaken measures to strengthen his regime in order to neutralise potential unrest, such as the recent formation of the Russian National Guard, which is symbolic of a general redistribution of control within Russia’s security structures. The leading roles in this new formation have been given to people who are personally loyal to Putin and have worked with him for many years. Indeed, the new National Guard will be under the personal control of Putin. As such, a significant weakening of Putin’s regime is unlikely in the near term, especially taking into account the political and organisational weakness of the opposition and civic society.

At present, no real democratic alternative to Putin’s regime exists in Russia. There are no strong democratic leaders or structures which can be supported by a significant part of the Russian population. Moreover, the ideals of western-style liberal democracy have been discredited in Russia following the unsuccessful democratic reforms of the 90s. Thus, the notion of establishing a liberal-democratic regime as a replacement for Putin’s regime is highly problematic. 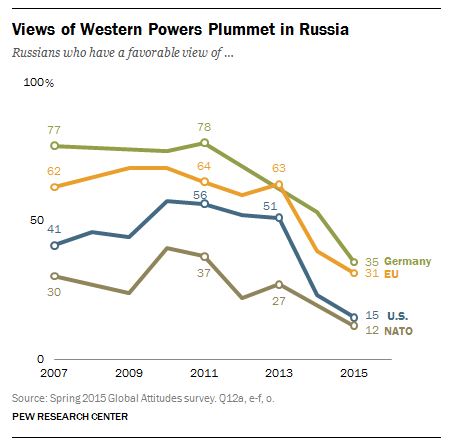 But this does not mean that Russia cannot be successfully contained in Ukraine through economic and political sanctions. The sanctions are working and, while Russia will not withdraw from Crimea, a compromise is feasible in eastern Ukraine, as illustrated by the Second Minsk agreement. At least on paper, Russia has indicated that it supports Ukraine’s territorial integrity, with the exception of Crimea, through the federalisation of the country – or at least the provision of a special status for Donetsk and Luhansk. From Russia’s perspective, the federalisation of Ukraine will prevent its integration into the EU and Nato, counterbalancing western influence.

The West and Ukraine

In practice, Ukraine has little prospect of being accepted into the EU or Nato in the near future. The recent referendum in the Netherlands demonstrates that a significant percentage of western Europeans are not ready to support such close links with Ukraine. And it would be particularly difficult to explain to European taxpayers why they should support the accession of Ukraine, which remains a poor country with significant corruption problems, damaged infrastructure, and a notably different culture. All of these factors may potentially undermine the belief of the Ukrainian population in pursuing a pro-western course.

The best thing the West could do for Ukraine would be to provide tangible assistance for statebuilding efforts in the country. The formation of an effective Ukrainian bureaucracy and an active civil society should be key priorities, as should the ongoing fight against corruption. These elements are the foundation for political stability in Ukraine and this is the best protection against Russian revisionism.

And if the West wishes to influence Russian public opinion then this can be achieved by setting an example in Ukraine. This process may take years of political and economic efforts from the West, but it nevertheless offers the best route forward. A stable and relatively well-developed Ukraine could ultimately be accepted into the EU – although the prospect of Nato membership should, in all likelihood, be dropped permanently as it is likely to be the source of enduring tensions between the West and Russia moving forward. 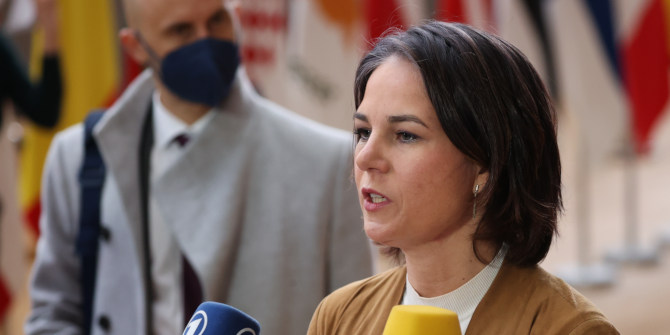