Europeans are often assumed to be more in favour of redistributive policies than citizens of the United States, but is this actually the case? New research by Jennifer Oser and Marc Hooghe finds that American public opinion is indeed less supportive of redistribution and social security than in Europe. However, a very substantial group of US citizens would still like more to be done to reduce poverty and inequality.

In new research, we report on a survey we implemented in the US that paralleled a European study in 29 countries. We asked uniquely comprehensive questions about what citizens value as most important for democracy in their countries, including questions of protection from poverty and income inequality. Our findings suggest that the importance of the topic is not just a matter of party strategy, but also reflects deeper cleavages among US public opinion.

Our first finding is that support for social security and redistribution is indeed lower among US than among European public opinion. This finding comes as no surprise, and Table 1 shows that of the 11 items listed, the average American considered protection from poverty and government efforts to reduce difference in income levels as the two least important items.

Table 1: Importance for democracy among Europeans versus Americans 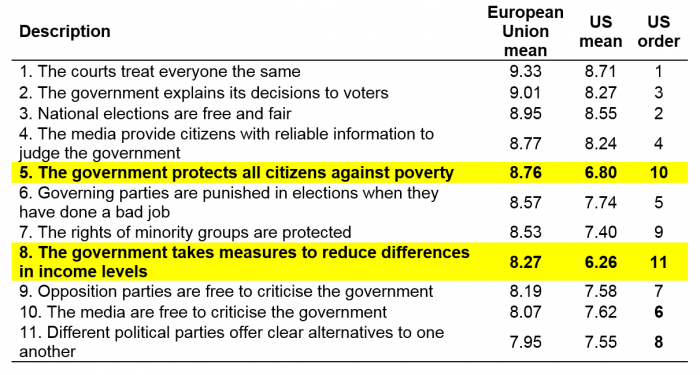 Source: European Social Survey 2012 and parallel Cooperative Congressional Election Study module, 2014. Scale is from zero to 10, where 10 is “extremely important”. In related studies, we examine how these democratic ideals relate to populism, trust, and social versus political rights.

US citizens clearly have lower expectations in comparison to their European counterparts that the government will protect all citizens from poverty. Research on this topic often assumes that experiences with social security will lead to increased support for redistribution: once citizens have experienced that social security indeed can contribute to the quality of life for everyone, they will take this form of protection for granted. For Western Europe, more than a century of experience with social security arrangements clearly have played this role. In the US, on the other hand, the Affordable Care Act has had only a couple of years to earn legitimacy and acceptance. While we do not know whether support for fighting poverty was weaker or stronger in the past, it remains obvious that adherence to a social conception of full citizenship remains weaker in the US than it is in Europe.

Structure of support for redistribution

In the US, however, a different picture emerges: all groups across the left-right spectrum are fairly close to the average, except for those who self-identify as far right, and a startlingly low 3 percent of this self-identifying far right group support social citizenship rights. 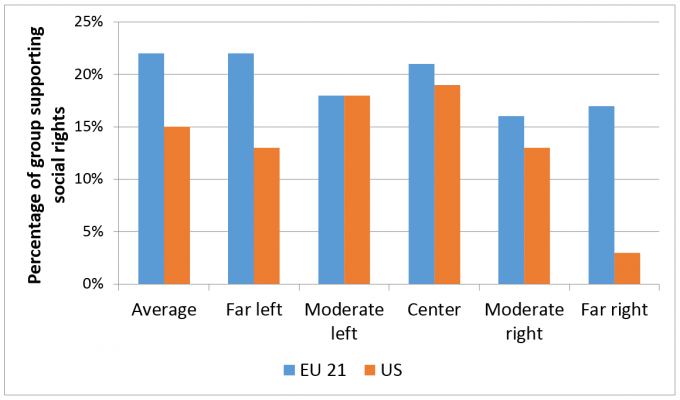 To phrase it differently: in contrast to Europe, in the US there is a distinct group that opposes government intervention to reduce poverty. This group is not only substantial (12 percent of all US respondents identify as far right), it is also highly vocal and well-organised. This organising power allows it to function as a political veto-player. While in practice a large majority of the US population seems to be in favour of some form of government intervention, their support is only lukewarm, at least compared to the level of support we find in European countries. This ambivalent attitude provides a very ideologically driven group with a window of opportunity to impose their views on the political decision making process.

In sum, this new study finds that public opinion is less supportive of redistribution and social security in the US than in Europe – but the results also make clear that there is a very substantial group among US citizens that would like more effort to reduce poverty and inequality. Indeed, we see evidence of US support for social citizenship rights in the public debate’s strong reactions to the threat that more than 20 million people could lose health insurance protection if recent legislative proposals to repeal and replace the Affordable Care Act are implemented.

Note: For the full study, see the authors’ journal article in Sociological Perspectives, which SAGE Publishers have made available for free until 31 October. This article originally appeared at our sister site, USAPP – American Politics and Policy. It gives the views of the authors, not the position of EUROPP – European Politics and Policy or the London School of Economics. Featured image credit: Dennis Skley (CC BY-ND 2.0)