The internet is a challenging environment for those looking to engage in enlightened public discourse. In this repost, Fabio Sabatini and Tommaso Reggiani present evidence showing how, although incivility has become the default setting for online conversations, where debate is civil it has a corresponding effect on levels of trust. Suggesting that an appropriate policy response to the incivility of the internet, is not to crack down on bad behaviours, but to create online platforms that promote civil constructive interactions.

Have you ever witnessed (or been involved in) one of those endless Facebook discussions where users fight each other on sensitive issues with nonsensical arguments and rude comments filled with hate and stereotypes? How did this make you feel?

By contrast, how does it make you feel to participate in a civil thread were everyone comments in a polite and constructive manner? Does this affect your confidence in humanity?

Social media were initially credited with the potential for reinvigorating trust, by offering new opportunities for social and political participation. This view has been recently challenged by the rising phenomenon of online incivility, which has made the environment of social networking sites, such as Facebook and Twitter, increasingly hostile to users.

Online incivility is a manner of harassing behaviour that can range from aggressive commenting in threads, incensed discussion and rude critiques, to outrageous claims, hate speech, and more severe forms of harassment such as purposeful embarrassment and physical threats. Pew Research Center (PRC) reports that the majority of Americans have been targeted, or have witnessed others being targeted, with online incivility. The descriptive evidence available so far, also indicates that social media users perceive incivility as the norm of online interaction.

Given the penetration of social media and the importance of trust to economic activity, economists have started analysing how the tone of discussion in social media affects trust across users.

In a recent paper, with Angelo Antoci, Laura Bonelli and Fabio Paglieri, we reported of a novel experiment in a Facebook setting to study how the effect of social media on trust varies depending on the civility or incivility of online interaction.

We compared the trust and trustworthiness of three samples of participants randomly involved in two kinds of Facebook-mediated interaction. One group was exposed to four, authentic, threads of uncivil discussion. Another group was exposed to the same threads in which uncivil discussions have been replaced with polite interactions by the experimenters.

The third group was used as a control condition: participants were exposed to the same thematics used in the other treatments, but in the form of short news excerpts and without any kind of social interaction. To assess trust and trustworthiness, participants were then required to play a trust game.

The researchers found that subjects exposed to civil Facebook interaction are significantly more trusting. In contrast, when the use of Facebook is accompanied by the experience of online incivility, no significant changes occur in users’ behaviour.

The results of the experiment indicate that when the tone of discussions deviates from the “uncivil status quo” and is accompanied by civil interaction, it significantly raises participants’ trust with respect to both the uncivil treatment and the control condition, whereas it has no effect on trustworthiness. In contrast, if Facebook use is associated with the experience of online incivility in line with the status quo, there is no significant change in participants’ trust and trustworthiness with respect to the control condition.

Incivility as the norm of online interaction

This study provides the first experimental evidence of a positive effect of online civility on social trust. While exposure to civil online interaction induced a significant increase in people’s trust, the opposite condition, i.e. online incivility, seemed to be considered “business as usual” and thus did not produce any effect on trust, with respect to the control treatment.

This lack of effect of online incivility is striking, whether it is interpreted as a form of expectation matching (incivility is what people routinely expect online, thus being exposed to it does not change their expectations on others’ behaviours) or as a sort of immunisation effect (people are used to such a high level of online incivility that the experimental manipulation failed to elicit a response): in either case, incivility seems to be perceived as the norm of online interaction, rather than the exception.

This is a rather depressing finding, but also one in full accordance with the survey data and the anecdotal evidence available so far. What is much less depressing, and indeed encouraging, is the positive effect on trust of even a brief exposure to online civility: contrary to intuition, according to which a quarrel is much more salient than a polite discussion, a simple lack of aggression in expressing a difference of opinions online acts as a powerful determinant of higher levels of trust towards other people.

Social media are facing increasing criticism and scrutiny, since recent analyses of key political events (such as the 2016 US presidential election and the Brexit referendum) have suggested a link between the extreme polarisation of public opinion and the relatively small number of platforms that monopolise online discourse – most notably, Facebook and Twitter.

Public discussions on such platforms have also been shown to create and maintain so called “echo chambers”, thus leading to increased polarisation and partisanship. Therefore, it is not entirely surprising to find confirmation, in our results, of a rather bleak outlook on public discourse on social media, where uncivil debate seems to be considered as normal.

However, the striking result of our study is that even minimal exposure to the opposite trend, i.e. civil online interaction, has a significant effect on social trust. This suggests that what is at stake in moderating online discussion is not simply the prevention of negative phenomena (hate speech, cyberbullying, digital harassment, etc.), but also the achievement of significant social benefits, most notably a measurable increase in trust and social capital that can, in turn, positively affect economic development.

The take-home message for policy makers is rather straightforward: instead of focusing exclusively on fighting against noxious online behaviour, we should also create the preconditions to promote civil discussion on online platforms. While the former goal needs to be pursued via strict regulations, the latter is best fostered by carefully designing (or tweaking) the platforms themselves.

In doing so, freedom of expression needs to be preserved for all users, which is why we are sceptical that legal prohibitions alone can act as a panacea against online incivility. Instead, we should strive to effect a paradigm shift in what kind of interactions social media afford to their users: today uncivil and shallow confrontation is the norm, with civil debate relegated to being the exception; tomorrow it should be the other way around, thanks to social networking platforms designed to encourage reflective discourse, unbiased assessment of evidence, and open-minded belief change – while still leaving people free to verbally attack each other, should they feel so inclined.

This blog post is based on the authors’ paper Civility and trust in social media, written with Angelo Antoci, Laura Bonelli and Fabio Paglieri, published in the Journal of Economic Behavior & Organization and originally appeared on the LSE Business Review

Fabio Sabatini is associate professor of economics at Sapienza University of Rome, department of Economics and Law, and research fellow at IZA. His research interests include economics and policy of networks, applied economics and public economics. Email: fabio.sabatini@uniroma1.it 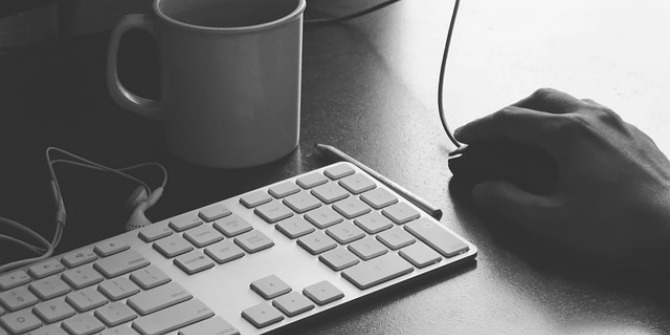