On Friday 15 October, Gabriel Palma gave an online lecture on ‘Why the Rich Stay Rich (no matter what)’ as part of the Cutting Edge Issues in Development Lecture Series for 2021/22. Professor Branko Milanovic was an invited discussant for the lecture. José Gabriel Palma is a Chilean economist; he has taught at the Faculty of Economics at the University of Cambridge since 1981 (now emeritus).  He is also a professor of Economics at the University of Santiago (part-time). Read what MSc students Luisa Fernanda Barajas García and Blaire Ng took away from the lecture below.

Explaining why certain countries have reached certain levels of economic and social development, while others have been left behind and stuck in poverty traps, has been one of the main topics of interest for development studies thinkers. Along these lines, the Latin American region seems to be the standard-bearer of inefficient institutions and markets, as well as high levels of inequality that are consistent over time. However, Gabriel Palma’s proposal invites a shift from understanding inequality as a question of how much economic output we generate, to a more detailed understanding of how the output is distributed. It is in this shift how we can explain such a latent division between developed (rich) and developing (poor) countries.

Gabriel Palma begins his presentation by describing two ways of understanding inequality: as disposable income inequality or as market inequality. The difference between the two is that the former measures levels of inequality after taxes and transfers (net income), while the latter focuses on the immediate outcomes of economic activities (income before any deductions). Each of these perspectives, seeing them as complementary to each other, allows us to identify the reasons behind the huge diversity in inequality levels.

However, what is interesting about Gabriel Palma’s study is that it offers a third explanation for the causes of inequality between and within countries. Traditionally, economic development and growth have been understood from two disciplines: the neoclassical, where inequality is the result of factors internal to countries (social mobility, education, health, income per capita, natural resources, sophisticated technologies), and the post-Keynesian or structuralist tradition, where politics, history and institutions matter just as much as economic fundamentals. The author’s central argument is that inequality is the product of a conflict between a multiplicity of actors, with multiple interests, whose interaction leads to different levels of inequality as they distort market outcomes to their own advantage.

Essentially, Gabriel Palma argues that perfect marker equilibriums, where price rules and rule-makers function harmoniously – or at least coherently – are not so straightforward. This ideal scenario does not take into account the presence of powerful agents (within the political or private sphere) who have the power to distort the market by capturing for themselves 10% of the pie, or even double of it. This inevitably leads a society to experience not only more inefficient markets but also ridiculous levels of inequality.  In this sense, inequality in countries also becomes a problem of governance and domination by elites who remain in power and capture rents over time.

Although the author mentions two alternative solutions to this situation in his latest stylised fact, the truth is that there is still no magic formula to solve inequality. While his explanation provides a valuable contribution to the study of development, it still leaves us to argue about the best way to tackle it. And it is at this point we return to the endless questions surrounding the role of markets, states, of civil society, the effectiveness of indicators and their limitations in scope and measurement to tackle barriers to development and welfare.

When COVID-19 brought the first wave of global lockdowns last year, Amartya Sen wrote that it was possible to build a better, more equal post-pandemic world. Yet 1.5 years onwards global inequality has only worsened as we had feared, with an unprecedented increase in wealth of the richest thanks to the stock market rally. Decades of progress made on inequality as a result of economic development in some poor countries have been reversed. Dr Gabriel Palma’s lecture on ‘Why the rich stay rich (no matter what)’ is thus truly timely and thought-provoking.

Palma explained in detail his innovative approach to examine and measure inequality, and described several observations on disposable income inequality:

So how did the rich get here? Palma argued that such diverse inequality is related as much (if not more) to history, politics and institutions as to economic fundamentals. Powerful, rich agents in this ‘antagonistic’ conflict can distort market outcomes to their own advantage. Dysfunctional institutions can persist - which is how the rich oligarchies have managed to ‘rig the system’ and continue extracting rents.

Gabriel Palma then discussed how market inequality has increased fiercely among the OECD countries particularly since the neoliberal reforms, such that there is no longer much difference among the European and Latin American countries. How to improve this inequality? He indicated two ways, of a very different nature. While Germany reduced market inequality via pharaonic redistribution and social protection that are increasingly inefficient and unsustainable in the long run, South Korea and Taiwan got there already in the sphere of production without much redistribution. He particularly warns against seeing ‘the German route’ as the exclusive way to address market inequality since ‘social protection’ has started to benefit the rich instead nowadays, via bank bailouts and QE in the financial markets.

In order to take ‘the Korean route’, Palma argued for more balanced productivity and employment growth across all different economic sectors. Branko Milanović also suggested work on getting more equal market income by deconcentrating ownership or wealth or reducing inequality in wages.

However, these changes will take time and are not easy to implement as established interests would get in the way. Moreover, policymakers seem to have become more sensitive to financial market expectations (which are increasingly bets and speculations from ‘armchair rentiers and traders’), as seen from the timing and patterns of interest rate and ‘unlimited QE’ (quantitative easing) policy changes in recent times. Are we ready to challenge our over-financialised economy? In my view, to take a ‘more Korean, less German’ route, a fundamental rethink on how to best run our economy and society is needed. This has become more pressing as populist parties which claim to promote a more equal society have gathered more dissatisfied voters in recent years. It could give way to more authoritarian practices that are contrary to liberal democratic values.

Now some of us might become slightly puzzled – wasn’t Parasite  in Dr Ha-Joon Chang’s lecture last week all about the deteriorating inequality in South Korea? Did Gabriel Palma’s positive depiction of Korea play down the seriousness of its inequality? To begin with, Palma’s chart did show that its inequality has been rising, although still ‘low’ on a global scale. Also, if we look back to the discussion between Ha-Joon Chang and Professor Francisco Ferreira last week, two important points can shed light on this purported contradiction:

In this sense, countries’ internal social and cultural dynamics should also be considered when analysing inequality. This is probably why the logical next step of the research, as Branko Milanović and Gabriel Palma both agreed, is  to look at who is living behind the deciles (D1-D4, D5-D9, d10, d10+, d10++), who are they sociologically and politically, in order to understand the background of the struggle between the poor, middle class, rich and the superrich.

Inequality can be an emotive topic, arousing feelings of unfairness in the world that don’t stay well with our sense of justice and self-worth. Telling stories behind these numbers not only informs our debates but also reminds us about a more sincere effort to improve inequality and our society.

For details of Gabriel Palma’s analysis, please refer to:

The next guest lecture will be with Clare Short on Friday 22 October 2021 on ‘What’s wrong with Aid?’. LSE Students, Staff and Alumni can register here. External audiences can join the lecture via YouTube.

Luisa Fernanda Barajas García is a MSc International Development and Humanitarian Emergencies student from Bogotá, Colombia. She has previously worked for the international sector in the promotion of livelihoods and socioeconomic inclusion strategies for internally displaced people, refugees, and migrants. She is widely interested in the process of peacebuilding in Colombia, as well as the effects of internal armed conflicts within Latin American countries economic development.

Blaire Ng is an MSc Development Studies student at the LSE. She did her undergraduate degree in Economics and Politics in Hong Kong and worked in banking and finance for five years prior to studying at the LSE. Her research interests are development economics, inequality, and economic history. 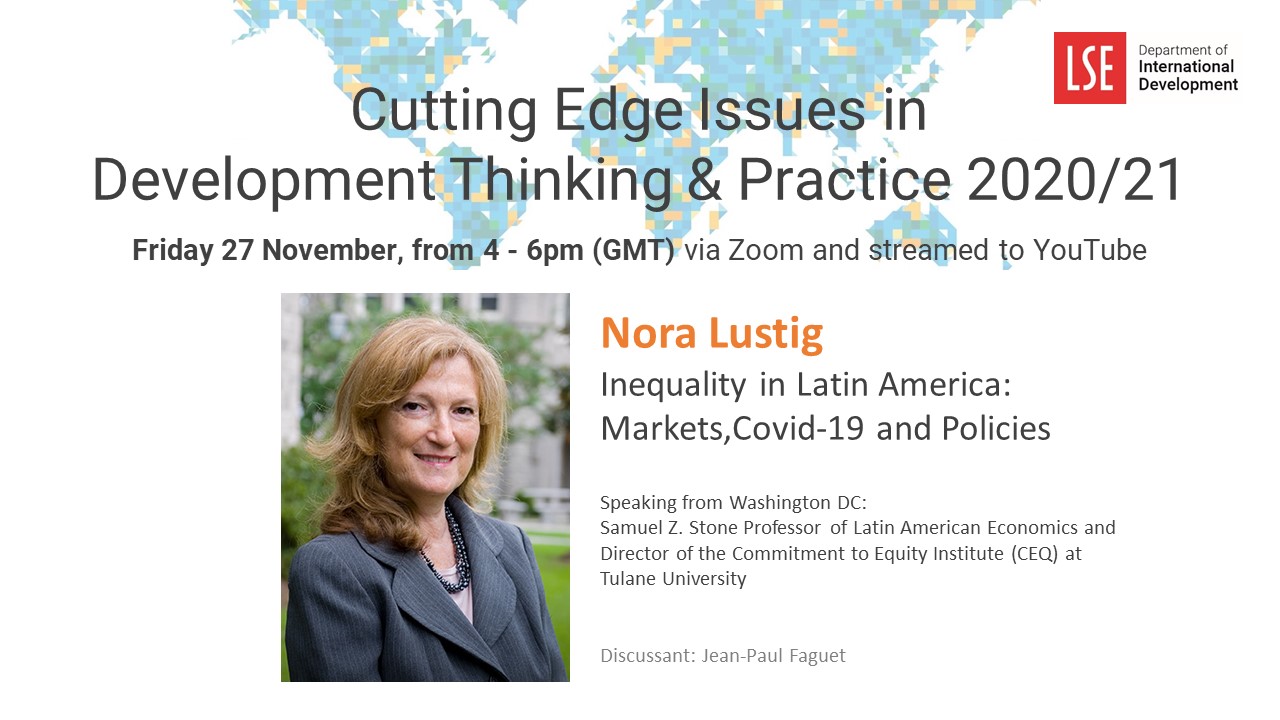 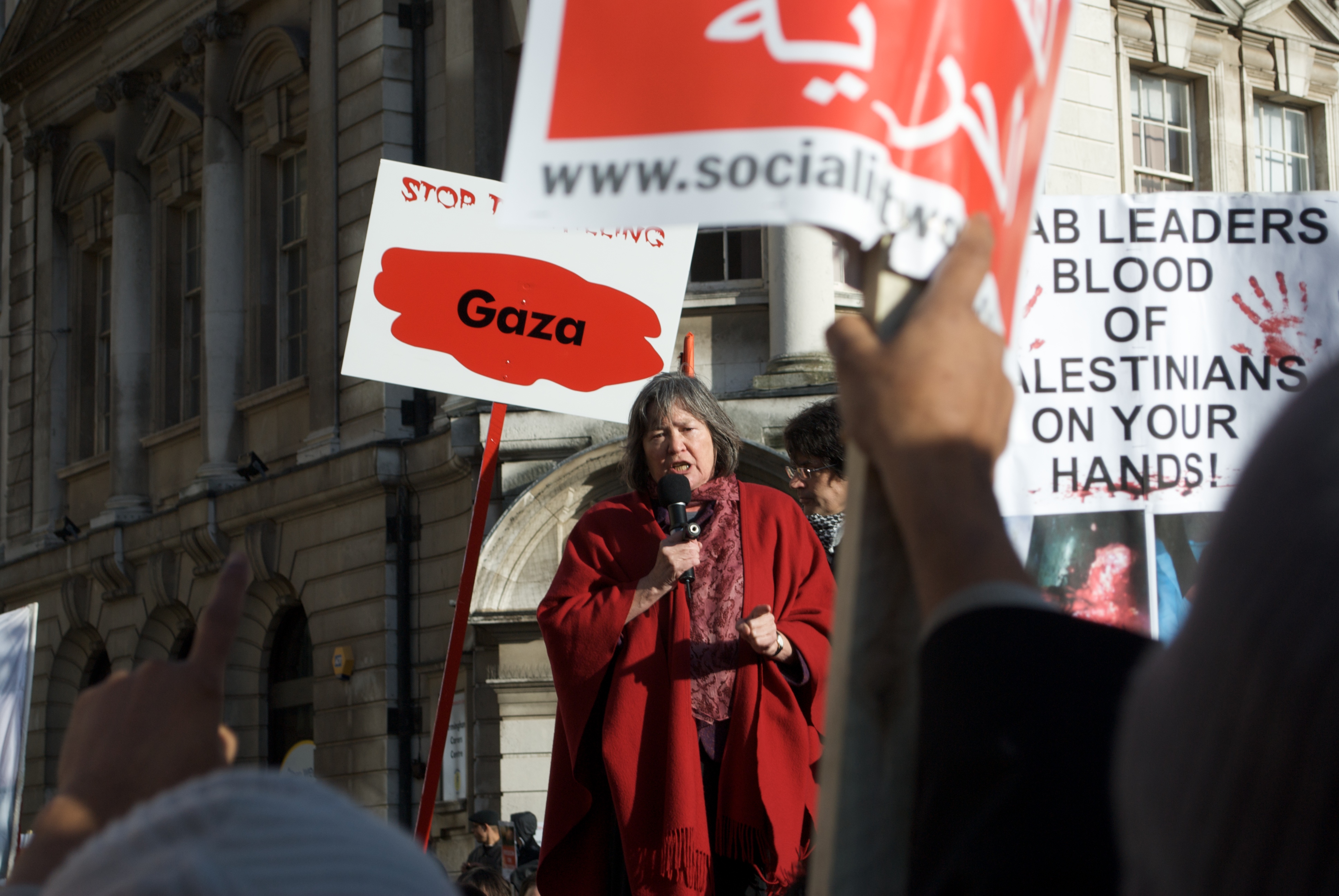