A diary entry by Beatrice Webb from April 1886 records her attendance at the first meeting of a fledgling group of social investigators called the Board of Statistical Research. Webb’s neat summary of the object of the committee – “to get a fair picture of the whole of London society – the 4,000,000!” – is a wry (and wary) encapsulation of the challenges and potential which lay ahead for the team as they embarked on one of the most ambitious pieces of social science research which had been undertaken.

The meeting had been called by Charles Booth, a Liverpudlian who, like many in the city, had grown wealthy as a result of shipping.  Booth’s position as the joint head of a company employing many people did not remove him from realising the discrepancies of wealth that he and his family enjoyed, as he wrote in the family magazine The Colony, “I am constantly impressed with the different aspect of our life compared to that of those who live on daily wages, from day to day, from hand to mouth.”

Poverty was a pressing issue for Booth and he had already been involved in analyses of employment and unemployment by the time the Board of Statistical Research met in April 1886.  The initial purpose of the group was to “connect poverty and wellbeing with conditions of employment [and] to describe the industrial peculiarities of London.”.  Such a task would seem of enormous difficulty today even with access to so much data a search box away.  Booth however was not only interested in raw data as he explained in a letter to Beatrice Webb “the figures or the facts may be correct enough in themselves – but they mislead from want of due proportion or from lack of colour.”

The publication of the 17 volumes of The Life and Labour of the People of London (the last of which was finally published in 1903) certainly did not lack for want of facts, figures or colour.  Indeed it is the seven colours, from black to yellow, demarcating levels of wealth on the Descriptive Maps of London Poverty that are the most visually compelling legacy of the work. 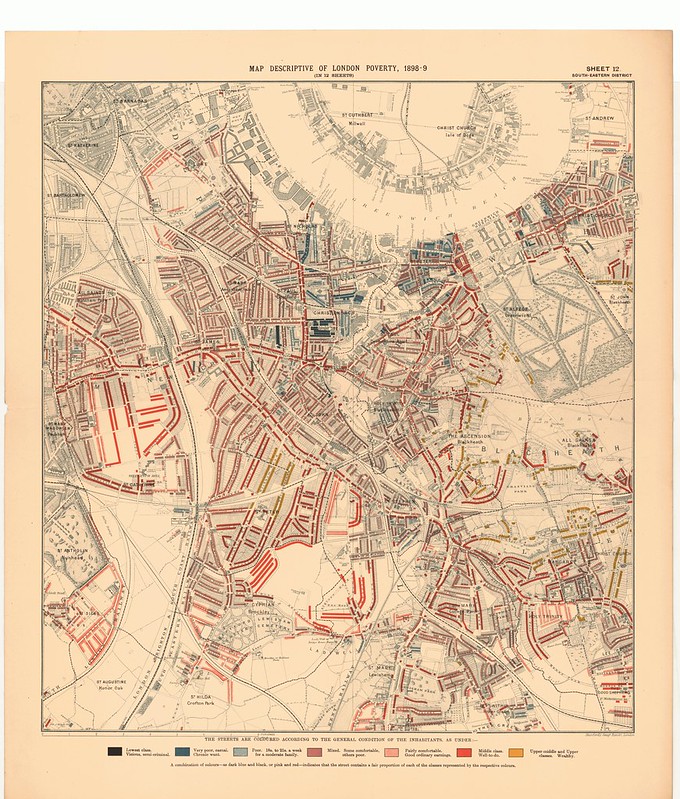 Considering London’s position as the heart of an enormous and hugely wealthy empire, the inequalities and squalor faced by so many of its citizens bring to mind something more akin to Conrad’s Heart of Darkness.  The survey of London carried out by Booth and his team was a sprawling epic of social science research. A study which, via painstaking analysis, discovered that 30.7% of London’s population lived in poverty would have been striking enough but the poverty series only comprised the first four volumes of the final 17; thousands of pages of observations concerning London’s industries, social lives and religious practices filled the rest.

Such a task would have been impossible without the help of a group of dedicated and brilliant assistants and the story of how Booth’s archive arrived at LSE is intrinsically linked to one of them.  Hubert Llewellyn Smith had been instrumental in gathering evidence and writing reports to support Booth’s efforts to trace the poverty lines in London’s east end. Hubert had been recruited from Toynbee Hall where he had gone as a result of a strong interest in the University Settlement movement.  His interests were broad and also would later include time campaigning in the labour movement as well as working in the Civil Service.

Later in his career he came to lead the New Survey of London Life and Labour (1928-1935) at LSE as a sequel to Charles’ earlier efforts. However, the connection with Booth, Llewellyn Smith and LSE did not finish with the completion of the New Survey.  Among a tranche of papers donated by his wife, Lady Louisa Llewellyn Smith, to LSE in 1946 was a letter from Hubert to Colonel Thomas M Booth, Charles’ eldest son, regarding the deposit of the papers of the Booth Inquiry to the LSE Library. Geoffrey Woledge, the eagle-eyed head of the Library at the time, spotted the potential for having the papers and wrote Colonel Booth a letter describing his keenness for their deposit.  Two and a half years later and the Inquiry’s papers were being officially scribed into the Library’s register of new acquisitions.

Booth passed away in 1916 and LSE’s Library marked the centenary of his death with an exhibition about one of its most extraordinary and treasured collections.  July 2016 saw the inscription of the papers into UNESCO’s UK Memory of the World Register where they are listed alongside other documents of national significance such as the Bill of Rights and Magna Carta. While Booth’s maps of London remain the most immediately arresting results of the survey, the inscription by UNESCO was for the archive as a whole, primarily because it tells the story of a city from many different perspectives.

Charles Booth’s London – mapping Victorian lives was an exhibition of the Booth archive in LSE’s Library in 2016.