LSE Library holds the archive and newsletters of the Commonwealth Countries League. Curator Gillian Murphy explores its founding and some of the people and topics that were covered at its conferences in the 1930s.

The British Commonwealth League was founded in 1925 to promote equality of liberties, status and opportunities between men and women in Commonwealth countries as depicted in this book plate found in a volume of its conference reports. The organisation is still active today as the Commonwealth Countries League. 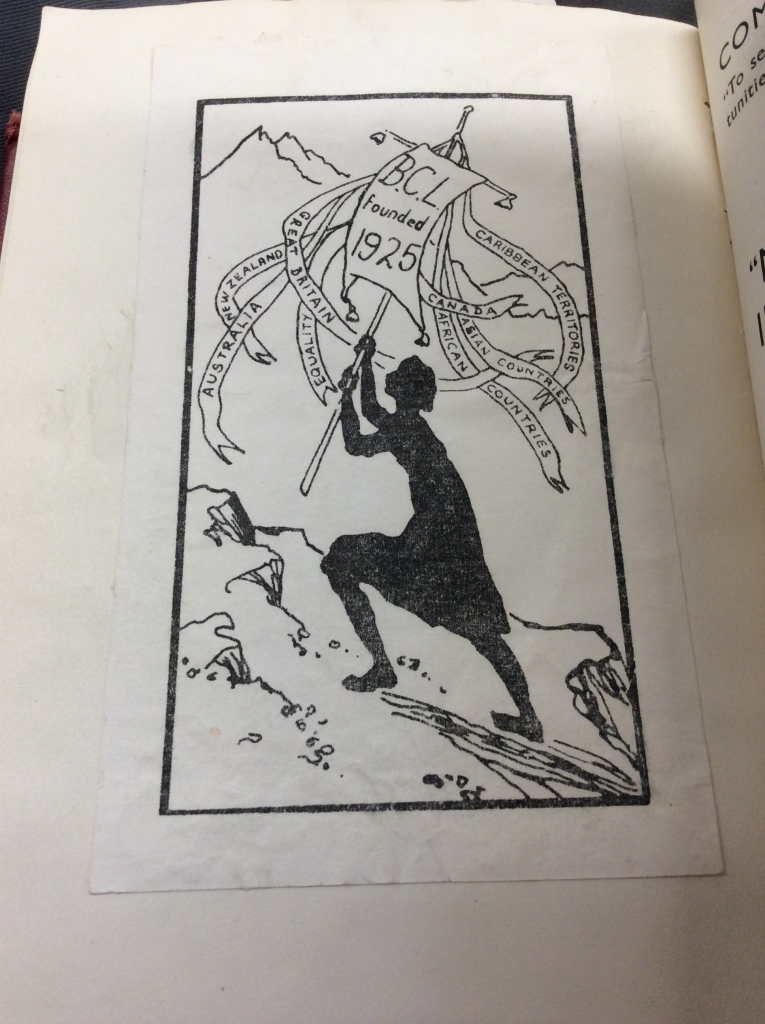 Many prominent members of the British Commonwealth League had been very active in the women’s suffrage campaign in England – Margery Corbett Ashby, Alice Hemming, Margery Chave Collison and Myra Sadd Brown – and they were also interested in campaigning for women’s suffrage and equality in the Commonwealth. The League also dealt with issues of citizenship, educational opportunities, lobbying for influence with the understanding that women would be represented at the political level throughout the Commonwealth. This is still at the heart of the mission of the League today.

The League’s conference reports include evidence of day to day activities of affiliated organisations which show Black presence in Britain. The theme of the June conference in 1932 was ‘Marriage from the imperial standpoint – The civil rights of married women inter-racial unions’. One of the speakers was Harold Moody, a Jamaican-born doctor who studied medicine at King’s College London. After being refused work because he was black, he started his own practice in Peckham, south-east London, in February 1932. He had formed the League of Coloured Peoples which was concerned with racial equality and civil rights in Britain and around the world. He made some stark observations about British society at the conference:

“Now you dear English folk are such a bundle of inconsistencies and contradictions that you are a source of merriment to us more logical and consistent coloured people. If I happen to be wealthy and in a position to spend a lot of money, then I may marry your daughter. If in addition to my wealth, I add the fact that I am either a prince or someone in exalted position, then you will practically throw your daughters at me, without any enquiry into my character. If I happen to be a poor student who has won his way by character and merit, then you will admire me, you will allow me to visit your home, take out your daughter and give me every freedom but if I should suggest that your daughter and I are compatibles and would like to spend our future lives together then you are immediately up in arms. Do please remember that our objective in coming here is not to get married. We come to get equipment for our life’s work and to drink in some of your culture and it is more than we dare do to risk our chances of attaining our goal…”

In the following year, the theme of the conference was ‘The mother of today within the British Commonwealth – rights of the native mother’. Audrey Jeffers, a Trinidadian social worker who became the first female member of the Legislative Council of Trinidad and Tobago, spoke about the difficulty of the phrase ‘native mother’ as it held no significance for mothers in the West Indies as there were many ethnic groups and none were ‘native’.

In 1934, the theme of the conference was ‘Woman, work and pay within the British Commonwealth’ and Una Marson, a Jamaican feminist, activist and writer, talked about qualified black nurses wanting to work in hospitals in England but were rejected because of their skin colour. She appealed to the British Commonwealth League to take up this matter. Jomo Kenyatta, a Kenyan anti-colonial activist who was a student at LSE and became the first President of Kenya, spoke about the psychological colour bar in various parts of Africa. He mentioned that in Kenya, an African doctor or any other educated African who was given little privilege on the ground of his education, was spoken of as a “black European” and people were expected to address him in that way “so that he should not think he had the same kind of mind as white people had!”

The Commonwealth Countries League archive and conference reports are available at LSE Library.