LSE Library holds the archives of the Fellowship of Reconciliation England and its London Union. Carys Lewis introduces the London Union archive and urges anyone with an interest in pacifism, peace groups or social work to consult it. Three stories illustrate the collection: a scheme to find Welsh young women jobs in London; the 1940’s prison diary of conscientious objector Stella St John; and the experience of Fredrick Bradley, a conscientious objector during the First World War.

The Fellowship of Reconciliation (FOR) has its roots in August 1914 when Henry Hodgkin (a British Quaker) and Friedrich Siegmund-Schultze ( a German Lutheran) attended a Christian pacifist conference in Germany. On bidding farewell at Cologne train station and seeing war between their countries as inevitable, they pledged that, “we are in Christ and can never be at war.” On returning to Britain, Hodgkin spread the message to Christian groups across the country and the Fellowship of Reconciliation was born, with active branches across the nation. The London Union, its largest group, was established in 1916. It supported conscientious objectors during World War I and passive resistance during World War II and branches were formed worldwide.

The majority of the Fellowship of Reconciliation: London Union archive was deposited at LSE Library in 1984, with more added over time. It consists of 371 files and is a useful resource for anyone researching pacifism in the period surrounding the Second World War. The archive gives a sense of what living in poverty entailed before the creation of the welfare state. The contents include:

During the 1930s a dedicated Welsh Girls Committee operated within FOR and actively helped young women from economically deprived areas of south Wales find work in London as domestic servants. A report from c 1930 gives some details on how the scheme was administered:

Much care and personal attention in addition to extensive correspondence, is given by Ethel Alcock-Rush (who acts as ‘mother’ and secretary) in order to ‘wed’ mistress and maid happily. She aims at finding suitable homes for girls in groups in the same neighbourhood so that they shall have the companionship of each other, thus obviating the many difficulties which might arise from home sickness.

The archive contains correspondence and reports detailing how employment was found for the girls and in some cases it’s possible to follow how the girls fared in London. Many of the girls were found through the Coalfields Distress Committee which was part of the Society of Friends (Quakers) organisation. They had representatives in Brynmawr, Blaenau Gwent, who corresponded with the FOR committee in London and provided details of girls looking for employment.

Sadly sometimes it did not work out for the Welsh girls in their new London employment, some were reported to be homesick or too young to cope with the responsibilities they were tasked with (some were just 14). In January 1930 Ethel Alcock-Rush wrote that:

Gwenfil Gilliard is proving rather a trial, she ran away from the place where I put her and said she wanted to be near a friend at Walham Green after much trouble I found her in a situation already secured by her friend (the lady not knowing that she had run away), she told me that she was ever so happy in the new home… things went all right a few weeks and now the lady will not keep her and Gwenfil says she will not go home, I really think she should return and pay her own fare. She does not seem to care and I have no place I can send her.

Stella St John (1907-1996) was an employee of the Fellowship of Reconciliation. She wrote this on her imprisonment in Holloway prison in 1943 – her crime being a conscientious objector (CO). These quotes are part of a fascinating account of her time in Holloway which was later published by The Howard League for Penal Reform.

On arrival we were taken into a room where an officer took down particulars of our sentence, age, religion. We were then taken upstairs and locked into a kind of little metal boxes with wire on top, these were about 4 ft. x 4 ft.

The Chaplain, who is an Anglican, sees each admission and discharge alone. We did not get on too well as he is not fond of conscientious objectors, his view being that Hitler is the ‘Anti-Christ’ and all Germans should be shot as mad dogs. However, he offered a prayer that while I had time to think it over I might be guided aright.

I was put in the laundry for the first fortnight. It is notoriously a place people dislike. The first few days were extremely unpleasant. Several of us who were new had no idea what to do, when we asked we were told: “Don’t ask me I’m too busy to bother with you.” We then just stood doing nothing and got cursed for that!

The workroom cleaner was a great source of entertainment, most of her life has been passed in the workroom. She goes out now and again for a few days and on returning last time was furious because the floor had not been kept up to her usual standard. Her language is slightly indelicate and when a battle ensues between Maggie and one or another of the old lags nothing is left to the imagination, not that it stops at words, once three stitches had to be put in a girl’s head where Maggie hit her with the broom handle! Leave Maggie alone is the best policy, followed by officers and prisoners alike.

The prisoners are usually amazed when you say you are in for conscientious objection. On the whole they are very tolerant about it, some even being sympathetic to the point of saying, ‘Good luck to you, I don’t hold with this war, but I wouldn’t get put in here for it.’ Others merely look at you as if you were mad.

In general there is a great sense of loyalty between prisoners and they treat you almost at once as a fellow sufferer and are both sympathetic and kind. At first I was put in a cell among the ‘penals’, mostly middle aged women who were serving sentences of several years. No one could have been kinder than they were in the first few days, in showing me the ropes and thereby helping me to keep out of trouble.

The papers about Stella St John’s imprisonment also contain correspondence from her family. Her aunt wrote to a Fellowship of Reconciliation staff member:

To my mind her views on the war are absolutely lacking in sense – if all Englishmen took that line you, Stella, myself and all helpless people, would by this time have been raped, tortured, hanged or even worse. There would have been nothing to stem the awful tide of devilish brutality and the world would be hell on earth… I do admire her with all my heart. It is not that she wants to lead a lazy life like so many co’s, she does such splendid work… I know she has gone to prison for conscience sake. It is grand of her – but as I say, I can’t imagine how she can hold such mistaken views. It is a pity.

Stella qualified as a veterinary surgeon and was active in the headquarters of the West London (Methodist) Mission run by Lord Soper and was deeply involved in much of the Mission’s relief work. In 1988 she appeared on a television programme about female peace campaigners. She died in 1996.

A scrapbook from the British Fellowship of Reconciliation was compiled by the Bradley family of Leigh-on-Sea, Essex and details Frederick Bradley’s stance as a conscientious objector during the First World War. There are press cuttings from local newspapers detailing Bradley’s appearances at Military Service Tribunals requesting exemption from service in the army. Conscription was introduced for single men in January 1916 and Bradley was successful in gaining exemptions three times. His father argued that he needed his son to assist with running the family ironmonger business, whilst Bradley stated he was a conscientious objector.

The press cuttings give an indication of local feeling towards the case with one headline reading “Third Time of Asking”. At his final appeal in September 1916 Bradley stated:

He absolutely refused to take life. He had been a vegetarian for something like three years because he would not have animal life taken on his behalf. He had been a member of the Peace Society since 1906…

The tribunal concluded that Bradley be allowed to undertake non-combatant service. There are two forms which indicate that Bradley was imprisoned or sent to a work camp controlled by the Committee on Employment of Conscientious Objectors. One is dated 1918 and is a release form permitting Bradley to take up exceptional employment, written underneath is “on leaving Dartmoor for home”. The second is undated and contains a promise from Bradley to serve the committee and to reside where they determine at any time. The note at the bottom of this page confusingly states “on leaving Wormwood Scrubs for Dartmoor March 1916”, from the press cuttings we know that Bradley was being granted exemptions in military tribunals at this date. I suspect that an error was made in recording the date and it should read 1917 or 1918. It’s a reminder that you cannot always trust archives! Another indicator that Bradley was in prison is a copy of the dietary for male convicts in convict prisons, which reveals they received less rations than civilians.

Interestingly the scrapbook also contains two poems written about Bradley both of which deplore and mock his conscientious objector stance. One of which, signed “from a nice girl”, calls Bradley “a downright bad slacker” and accuses him of writing many a lie. Both poems mention there being no nice girls in the army and this being why Bradley had not enlisted.

Other members of the Bradley family served in the war. The scrapbook reveals that his younger brother Stanley was killed in action in November 1917 and that his sister Ruby married Signaller F J Dixon in February 1918. As Bradley acted as best man it appears his family accepted him as a conscientious objector. His presence at the wedding suggests he was allowed more freedom than other conscientious objectors. Frustratingly the scrapbook leaves questions unanswered.

This post originally appeared as a series on the LSE Library blog for the Swords into Ploughshares Project. The project was made possible by a grant from the National Cataloguing Grants Programme for Archives Fund.

Carys Lewis worked on the Swords into Ploughshares Project at LSE Library. The project was made possible by a grant from the National Cataloguing Grants Programme for Archives Fund. 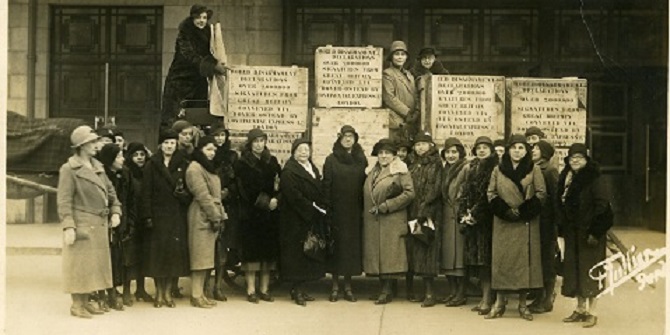 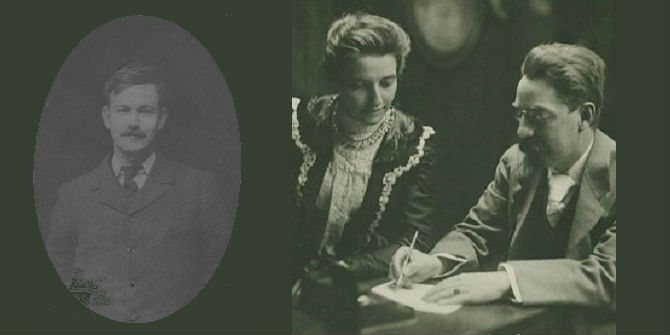 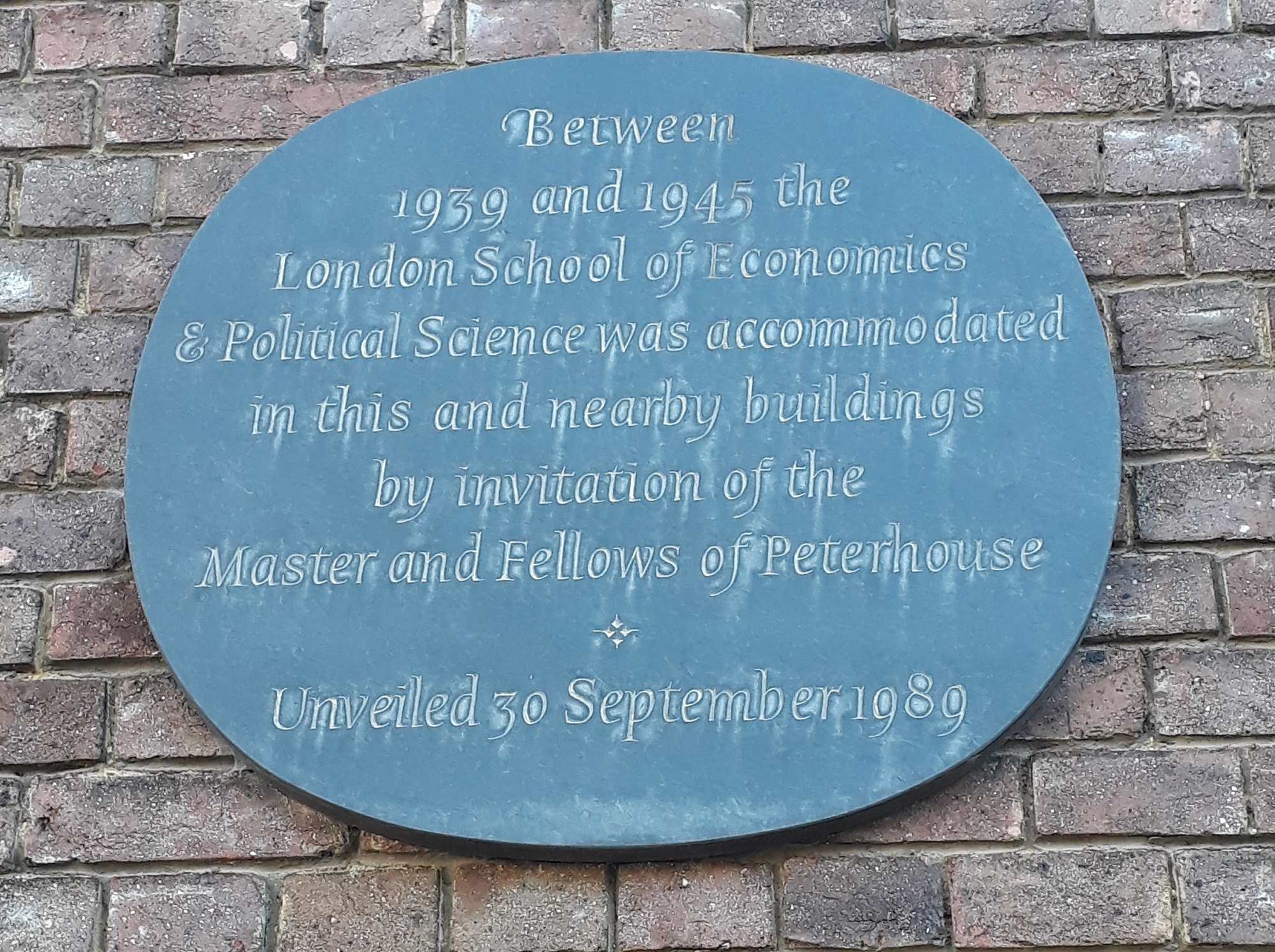