When war broke out, LSE was almost twenty years old. In 1913-14, there were 1,681 students enrolled at the School, of whom 142 came from overseas and 583 were women. From the beginning, its student population was unusually diverse, and a high proportion were postgraduates – though many others (often older and already employed) pursued non-degree, vocational courses. Much instruction took place between 6 and 9pm, and social life centred on the refectory. The School had a mixed hockey team, and amateur dramatics, terminal balls, and Epping Forest picnics punctuated the academic cycle.

Professor David Stevenson produced the first exhibition which covers life at LSE before 1914, life during the War, LSE people such as Clement Attlee and Hugh Dalton, and finally remembrance.

LSE’s archives provide a fascinating insight into how the School community adapted to the upheaval of the First World War – and also how in some ways its work continued much as normal. Through the story we can follow the fortunes of a galaxy of leading figures in the twentieth-century British Left, often at formative moments in their lives.
Professor David Stevenson 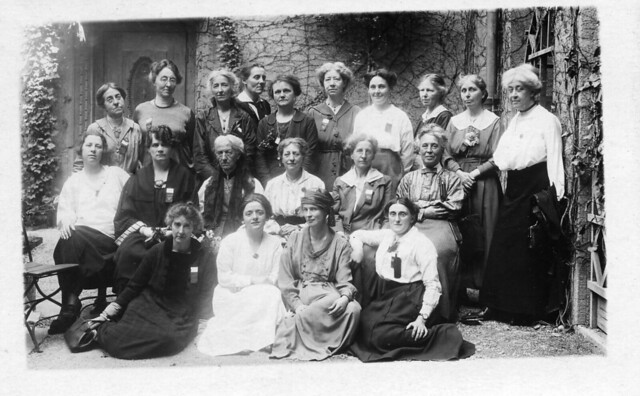 Whilst Europe was engaged in the First World War, over 1,000 women from across Europe and America made the dangerous trip to The Hague with the aim of stopping the war. Once they arrived at the Women’s Peace Congress, in The Hague, they founded the Women’s International League for Peace and Freedom (or WILPF) “To study, make known and eliminate the causes of war”. The online exhibition looks at photographs of the early days of WILPF, its first manifesto, and an arm band from the 1926 peace march.

Library curator Daniel Payne produced the second exhibition, which looks at LSE Library’s collection of archives relating to the British section of WILPF.

It’s been fascinating to delve into the archives of the British section of WILPF. There are some wonderful photographs, along with various WILPF documents such as letters, correspondence, minutes of executive committee meetings, and annual reports. The archives are open for anyone that is interested in looking at them, and WILPF continues today ‘offering a feminist perspective to building peace’.
Daniel Payne

To see the Google project in full and other cultural institutions collections related to armistice, head to “Armistice Day: Commemorating the end of the First World War” g.co/armisticeday

To read more about LSE’s collections and connections the First World War, have a look at the following blogs: