In The Spirit of Compromise, political thinkers Amy Gutmann and Dennis Thompson show that campaigning for political office calls for a mindset that blocks compromise – standing tenaciously on principle to mobilize voters and mistrusting opponents in order to defeat them. But good government calls for an opposite cluster of attitudes and arguments. Calling for greater cooperation in contemporary politics, this book will interest all who care about whether their government leaders can work together, finds Paul Brighton.

The Spirit of Compromise: Why Government Demands It and Campaigning Undermines It. Amy Gutmann and Dennis Thompson. Princeton University Press. April 2012.

Can politicians campaign successfully and then govern effectively? Are the two skills so different that it is unlikely one politician can excel at both? Does the campaigning mindset militate against the ability to compromise with one’s political opponents, which is almost invariably an important part of the art of government?

Amy Gutmann and Dennis Thompson, as academic political theorists, set themselves the challenge of comparing and contrasting the campaigning mindset and the compromise mindset in American politics which, they argue, is hindering top-quality decision making in the USA. They argue that recent trends such as the permanent campaign for office (both presidential and congressional) result in the candidate’s mindset (a word they repeatedly employ) being permanently rooted in campaigning, and never in compromise, mode.

The permanent campaign has been a feature of American political life for decades now. Gutmann and Thompson tell of a newly-elected congressman who declined to attend his own swearing-in ceremony because he was attending a fundraiser for his next campaign, two years ahead, on the very same day. In presidential politics, the permanent campaign has become more of a feature in recent decades. While earlier presidents like Franklin Roosevelt and Lyndon Johnson may have filtered major decisions through the prism of a forthcoming re-election campaign, it was, perhaps, the Nixon administration which was the first to exhibit real signs of a first term in which major, systematic efforts were made to link policy with campaigning – albeit often relying more on clandestine than overt activity. Most would agree that Reagan’s first term was seen as an opportunity to stage events and visual images which would act as the waging of a permanent campaign, as well as a resource for the official re-election campaign on television news. With varying degrees of success, Clinton and George W. Bush attempted to follow the same template.

The authors do not speak of other countries, but followers of recent British political history will recognise something very similar in Blair’s first term: the nearest we have yet seen to a permanent campaign in the UK. Indeed, the comparison extends also to Blair’s backbenchers who, we are told, were positively encouraged not to attend parliament but to go back to their constituencies and prepare for another Labour government by securing their own re-election. There have often been comparisons with Clinton and his first term, though his permanent campaign only really kicked in after his mid-term debacle in 1994. Both Blair and Clinton were clearly effective campaigners, but both also stand accused of underachieving in office because of their caution in not wishing to alienate swing voters or recent “switchers”. Ironically, this is the precise opposite of the problem diagnosed by Gutmann and Thompson: the charge that Blair and Clinton were too ready to compromise in order to placate potential opponents or dissidents.

Gutmann and Thompson, by contrast, base much of their own analysis on their own two chosen case studies: tax reform in 1986, during the second Reagan term; and Obama’s healthcare reforms of 2009-10. Because the authors are political theorists, when they discuss politicians acting on “principle” or out of a wish to “compromise”, there is the risk that theoretical categories became too neat and reductive, eliminating the countless shades of thought, motive, fear and other impulses that will govern the actions of politicians on particular votes or in individual speeches.

An example comes when they consider another “locus classicus” of effective decision-making: Lyndon Johnson’s passage of the Civil Rights Act of 1964. Gutmann and Thompson say: “One of the masters of legislative compromise, Lyndon Johnson, combined a strong defense of compromise in general with an equally strong defense of his particular deals as something other than compromises… Johnson steered clear of calling it a compromise…. Rather than acknowledging the concessions, he portrayed the result as an out-and-out victory.” This is true as far as it goes. But a close reading of the taped phone calls from LBJ’s White House, edited by Michael Beschloss, as well as the just-published fourth volume of Robert Caro’s “The Years of Lyndon Johnson”, titled “ The Passage of Power”, make it clear that Johnson did not get the measure through by compromising. The one thing he did not do in 1964 was to say to Richard Russell, the ‘de facto’ leader of the Southern Democrats in the Senate, “Ok, Dick. Now, let’s see what I can give up, and what you can give up.” Nor did he shout “I won!” and rub the Southerners’ noses in it when he got it through. What strikes us is how much more political and personal capital he was prepared to spend on it than his predecessor, JFK; and how much more nuanced the interactions were than a simple theoretical choice between “principle” and “compromise”.

And what of the media? According to Gutmann and Thompson, it is all down to framing. Because the media can only frame political transactions in terms of “who is winning?” or “how does this or that act help his/her (re-)election chances?” they are distorting the entire political process. They must, the authors tell us, spend more time reporting on governing mindsets than campaigning mindsets. So journalists should “appreciate the mindsets that support … governing”; they should use focus groups to find out what sort of political coverage people want; and they should report less of the minutiae of the campaign trail and more on “other aspects of the process”. Slightly more worryingly for the “men and women of principle”, the media should be encouraged to promote “journalists and programs that provide the kind of coverage that would promote understanding of the need for compromising in the business of governing.” After all the theory, it does, in the end turn out that compromise is good, principle bad! Whether all this is altogether healthy for journalism and the media, however, is quite another matter.

Paul Brighton is Head of Department of Media and Film at the University of Wolverhampton. He grew up in Wolverhampton. He attended Wolverhampton Grammar School, and won an Open Scholarship to Trinity Hall, Cambridge. He got a First in English and, after postgraduate research at Cambridge, worked for the media. He was a BBC Radio presenter for twenty years, before becoming Head of Broadcasting and Journalism at University of Wolverhampton. His book “News Values” was published by SAGE in 2007. He is now Head of Media, Film, Deaf Studies and Interpreting; and his next book “OrIginal Spin: Prime Ministers and the Press in Victorian Britain” will be published by I.B. Tauris next year. Read more reviews by Paul. 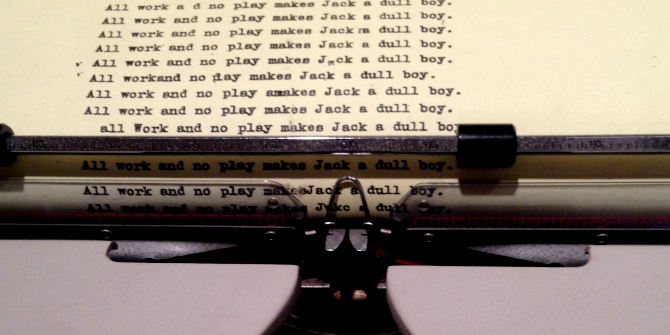