In Coalition Strategy and the End of the First World War, Meighen McCrae explores the role of the Supreme War Council as a coalition organ for inter-Allied strategic cooperation between 1917 and 1918. As the book encourages readers to consider the 1914-18 conflict from a global perspective and widens understanding of the coalition strategic planning timeline, this is a welcome addition to the Entente scholarship that will be of interest to anyone studying the nature of coalition warfare in the twentieth and twenty-first centuries, writes Sofya Anisimova. 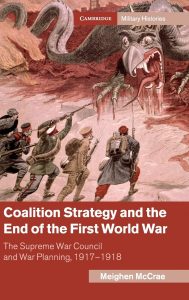 The First World War today is widely recognised as the ‘war of coalitions’: those of the Entente and the Central Powers. However, studies that examine the coalitions’ strategic planning, especially of the Entente, are rare as they usually require knowledge of at least two languages and travel to archives located in various countries. Based on sources from various British, French and American archives, Meighen McCrae’s book, Coalition Strategy and the End of the First World War, is a welcome addition to the Entente scholarship that not only encourages us to consider the 1914-18 war from a global perspective, but also to widen our understanding of the coalition strategic planning timeline: namely, that in 1918, the Entente decision-makers were preparing for the war in 1919.

The study revolves around the Supreme War Council (SWC) – a coalition organ, created in late 1917, which consisted of two representatives of Britain, France and Italy: a government leader and another government member. As an associated power to the Entente, the United States refused to take part in a political committee and was represented by the American ambassador to France who had merely observational functions. However, Americans took an active part in the Military Council, made up of the permanent military representatives (PMRs) of the Allied Armies. As professional staff officers, the PMRs were supposed to advise political leaders of the coalition on matters of military strategy.

The SWC inherited many flaws of previous inter-Allied institutions, such as inter-Allied conferences, munitions committees and economic agencies. It suffered from excessive bureaucratisation, a lack of executive power that would ensure compliance of all the coalition members with its decisions and an inability to fully mitigate the conflict between national interests and those of the coalition. Nevertheless, McCrae argues that over 1918, the SWC evolved into an effective platform of inter-Allied strategic cooperation. Despite its limitations, the SWC facilitated the communication between military and political leaders of the Entente. It helped coalition members to reach an agreement that future victory could be reached only on the Franco-Belgian front, and to concentrate their efforts there.

Moreover, the existence of a coalition body that allowed discussion of strategic plans was beneficial for all members of the Entente regarding their military importance. Italy was considered to be a junior member of the coalition, but thanks to the SWC, it acquired a platform where it could voice its concerns and demand assistance. It eventually received enough support to resist Austria-Hungary and stay in the war, whilst other Allied powers concentrated on the Western Front.

The PMRs were, in fact, the only inter-Allied body that was considering the strategy of the Entente from a global perspective as opposed to the headquarters of the various Allied Armies that were developing their own national strategies. In the Joint Note 37, examined in detail throughout the book, the PMRs outlined the Allied strategic policy for the coming year and stressed the importance of the secondary theatres, such as the Macedonian, Middle Eastern and Italian fronts, in relation to the Franco-Belgian front and the fight against Germany.

However, the notes submitted by the PMRs to the SWC had only an advisory nature. McCrae argues that outside the Franco-Belgian theatre, effective unified strategic policy was created by the SWC only when the national interests of the Allies coincided. In September 1918 the PMRs quickly agreed that offensive action in the Middle East must be postponed in order to concentrate resources in France. But at the same time, they failed to develop a unified plan of action in the Balkans and had to rely on France, which was the dominant power on this front.

The PMRs also easily reached an agreement about the primacy of the Franco-Belgian front in Allied strategy, which informed the actions of different Allied headquarters. But at the same time, they significantly underestimated the strength of the German Army and deferred the Allied offensive to the summer of 1919. Preparing for the decisive battle in 1919, the SWC and its military advisers were not ready to provide guidance for the future peace settlement. It is, McCrae argues, one of the reasons why the legacy of the SWC was soon forgotten after the war: it was not prepared for the peace negotiations in 1918 and it did not have enough time to demonstrate its advantages in times of war.

Coalition Strategy and the End of the First World War continues the study of the Entente strategy that began in the 1980s with the works of David French, later continued by Elisabeth Greenhalgh and William Philpott. It expands the study of coalition strategy to cover the Allies’ strategic planning for and into the year of 1919, and it answers the question not of ‘how the war was won’, but rather ‘how the Allies were planning to win it’. Moreover, McCrae solidifies the framework of coalition strategy analysis that includes both coalition institutions and the strategic policy created by them, paving the way for future Entente strategy research. Focusing on the four major Entente powers, it offers valuable insight on the balance of power in the coalition of 1918, the weight of the United States and the role of the Italian front in the coalition planning. A more detailed assessment of coalition from the perspective of the Italian high command would be a good addition to this study, but as French conceded in 2007, to delve into the archives of multiple coalition countries would be ‘a task not for one person, but for a small team of scholars’.

The First World War opened a new chapter in the history of modern warfare, not only in the field of military technologies, but also in coalition management. The short-lived Anglo-French Supreme War Council of the Second World War was drawn up on the blueprint of the SWC; even the experience of the coalition forces in Afghanistan in 2001-14, which at one point included troops of more than 30 countries, shares resemblance to that of the Entente in 1917-18. International coalitions are hard to manage, but they are also challenging to study. Meighen McCrae’s book brings us one step closer to a better understanding of how they operate and would be of interest to anyone studying the nature of coalition warfare in the twentieth and twenty-first centuries.

Image Credit: The Four Military Representatives of the Supreme War Council, Versailles, their CO’s, Secretaries, and Interpreters in Session (Art.IWM ART 4214) image: The interior of a large room at Versailles in which a meeting of the Supreme War Council is taking place. Senior military officers sit at a large rectangular table littered with papers. Copyright: © IWM. Used in accordance with IWM Non-Commercial License. Original Source: http://www.iwm.org.uk/collections/item/object/20621.

Sofya Anisimova is a PhD student at the School of History in University of St Andrews. Her dissertation is dedicated to Russia’s military strategy in the First World War, but she is also interested in history of Russian Expeditionary Force and veterans of the First World War in Russia.