For over fifty years numerous public intellectuals and social theorists have insisted that community is dead. In Great American City, Robert J. Sampson argues that communities still matter because life is decisively shaped by where you live. To demonstrate the powerfully enduring impact of place, Sampson presents here the fruits of over a decade’s research in Chicago combined with his own personal observations about life in the city, from Cabrini Green to Trump Tower, and Millennium Park to the Robert Taylor Homes. Laura Vaughan feels that Sampson’s work contributes to important debates around the place of the Big Society and neighbourhood inequality. 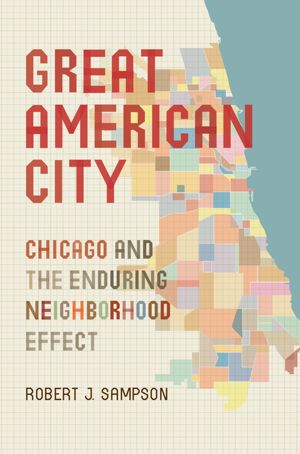 I imagine that any social scientist wishing to write about neighbourhood change, will feel almost impelled to go back to Louis Wirth and the 1930s Chicago School who first proposed urbanism as being a temporal process driven by social heterogeneity. In Great American City, Robert Sampson’s appreciation of the importance of place – of the context within which people live – is a clear legacy of School’s work and an important turn from sociology’s recent tendency to view deprivation as an aspatial problem.

Sampson’s admirable achievement in his synthesis of the social research Project on Human Development in Chicago Neighbourhoods, which he directed at the University of Chicago over the past two decades, is in using the project’s vast repository of data on mobility patterns, poverty, crime, unemployment, civic engagement as well as direct observations of social activities and physical features of the city’s streets to explore the extent to which an individual’s state of deprivation is affected by the spatial context within which they live.

Acknowledging the inherent problem of viewing spatial context as ‘deterministic’ of social outcomes, Sampson proposes that the persistence of segregation in particular areas of the city is proof of there being a defined neighbourhood effect. Three factors in particular contribute to the effect: low economic status, ethnic heterogeneity and residential instability. Sources of “compromised wellbeing”, such as poverty and unemployment, that would normally be viewed as problems relating to individuals (i.e. not influenced by environment) are shown to be consistently clustered in space. Sampson repeatedly shows how the multiple factors that comprise deprivation are interrelated socially and persistent spatially. He finds that housing inequalities and racial stratification are “etched in space”.

A lack of individual civic engagement is, for Sampson less important than a lack of communal organisation; his finding that the density of social networks is not necessarily a measure of a community’s efficacy could be seen as a refutation of Robert Putnam’s 2000 proposition that nowadays we are all ‘Bowling Alone’. Sampson’s stance has affinity to Julienne Hanson’s 1987 critique in the ‘Architecture of Community’ of simplistic notions of a correspondence between community and space. It is evident that the social ties beyond the neighbourhood are just as crucial as the ones made within it.

Sampson proposes that the neighbourhood effect has a structural logic comprising social problems, exacerbated by racial segregation and the ‘poverty trap’ that together explain the spatial inscription of inequality. Nevertheless, for a UK-based reader, the author’s focus on population mixing or ‘segregation’ in its traditional US analysis of black/white mixing seems to overlook the social complexity of a modern society that cannot be explained purely by issues of race – even in today’s Chicago, given its highly diverse population.

The author explores the extent to which Tobler’s “first law” of geography (‘everything is related to everything else, but near things are more related than distant things’) explains Chicago’s patterns of deprivation. He shows that social variables cluster in a particular pattern, and that there is an interdependence between factors such as poverty, racial composition and residential stability. Sampson’s explanation for this interdependence is a neighbourhood’s social connections and interactions. Although his description of how poverty spreads unevenly in particular  neighbourhoods implies that a neighbourhood’s spatial position contributes to its poverty, the question of what are the spatial mechanisms resulting in such patterning is not fully explored, except to say that a neighbourhood’s collective social properties are reproduced over generations, that deprived neighbourhoods influence their neighbours and that there is a spatial and generational transfer of deprivation characteristics.

Spatial dynamics and processes are said by the author to be an additional factor in creating clusters of disadvantage and his analysis of spatial distance is a marker of his subtle reading of the city’s geography, but still the reader is frustrated when seeking a clearer understanding of how these factors work, other than through proximity or propinquity between deprived individuals. It might seem unfair of me, as an urbanist, to comment on the lack of a physical explanation for neighbourhood effects that are identified by a sociologist – but arguably the ‘why’ or ‘how’ such effects emerge might help draw broader lessons from the study. For example, is segmentation of a deprived neighbourhood from places of work or lack of accessibility to education opportunities a factor in the entrenched persistence of its deprivation?

Nevertheless, one of Sampson’s most important contributions to the sociological canon is his conception of ‘collective efficacy’ – a community level set of resources such as trust, cohesion and social control. He demonstrates that the obverse of these help explain persistent inequality, especially when these occur over time – affecting a neighbourhood’s long-term reputation. Thanks to this important work, measures of community action and interaction are likely to be at the heart of sociological debates about neighbourhood processes for many years to come. Indeed, Anne Power’s recent report on the subject cites Sampson’s work to demonstrate that David Cameron’s ‘Big Society’ is not an alternative to government intervention. This finding alone makes this book a vital read.

Laura Vaughan is Professor of Urban Form and Society at the UCL Bartlett Faculty of the Built Environment. Her research uses space syntax to study the relationship between micro- and macro- scales of urban form and society and she has published over seventy articles, book chapters and papers on economic and social exclusion and inclusion. She tweets @urban_formation and blogs at urbanformation.wordpress.com. Read more reviews by Laura.