In some areas of online academic discussion and public debate, the under-representation of female voices continues to cause concern. As we enter 2013 and mark fifty years since second wave feminism, shouldn’t we have achieved a more healthy representation of women’s views and voices? Amy Mollett, Managing Editor of LSE Review of Books, discusses the steps that the team have taken to ensure near equal gender balance in their reviewers, and assures other editors and journalists that it can be done without too much fuss.

In November 2012, the BBC came under fire for failing to find a woman expert to debate breast cancer treatment on Radio 4, much to the anger of many listeners, who criticised the programme and the BBC as a whole for its more widespread under-representation of female experts. Why was this case? Are women experts and academics not being represented on blogs and in the media for journalists and editors to make contact with, or do the gender gaps in some disciplines remain so wide that no women experts can be called upon?

Data from a 2009 Survey of Earned Doctorates shows that the gender divide among doctorate-level graduates in the USA remains highest in philosophy, political science and economics for the social sciences, and even higher in physics, computer science and engineering, where women make up 20 per cent of graduates in each area. A look around most academic departments in the UK shows a similar picture, with this disparity reaching further into book and journal article publishing. In fiction literature too, it also remains an issue.

In April 2012 the LSE Review of Books was launched as an online-only, open access archive of book reviews from across the social sciences. Recognising that a wide gender gap still pervades in some academic disciplines, and so into academic material published in journals, books, and online, we attempted to address this disparity by aiming for a near 50-50 gender ratio of reviewers and expert voices. Through 2012, 54% of our reviewers were male, and 46% were female. 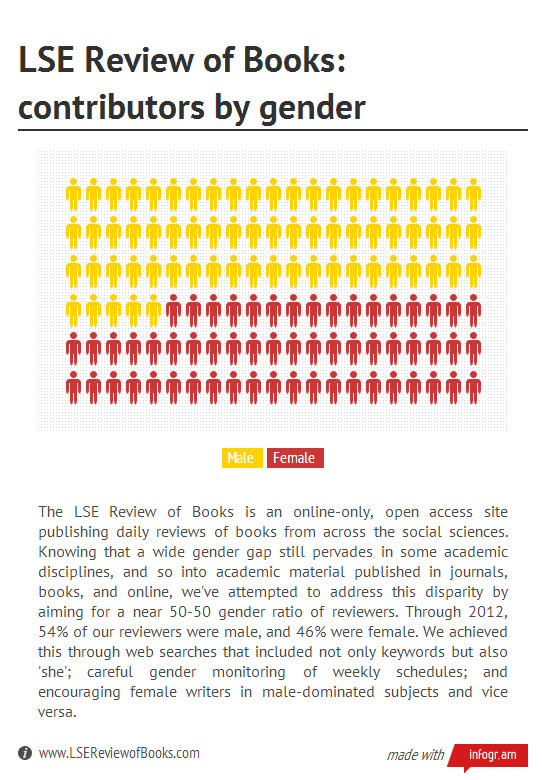 We would like to see this replicated across blogs and websites that feature academic and expert voices. So here are a few tips for editors and journalists on how to achieve a better gender balance.

Search engines are a great way to find academic contributors and experts for blogs and websites. However, in areas of research and discussion overly-represented by male academics, it is often the case that search results will yield several pages of profiles of male academics before revealing the first female academics of the same or similar standing. We found that this is especially the case in economics, philosophy, and politics.

An easy way to search for alternative or under-represented contributors is to include ‘she’ and ‘her’ alongside your keyword searches, for example ‘she her history of Hegel’s work ac.uk’. These search terms should give a selection of academic profile pages from women only, and can produce results that might be buried deeper into standard search results. The same is of course true for finding male academics in areas of research overly-represented by female academics, such as gender studies or anthropology.

Most blogs, websites, and news sites run their publishing schedules weeks or even months in advance and commission articles with plenty of time before publishing. If editors are not taking steps to represent the voices of men and women in more equal numbers, page after page of blog posts can easily turn into a week’s worth of content from one demographic.

A simple way of overcoming this is to re-arrange schedules in advance where necessary, either at weekly editorial meetings or daily as editors add content into the schedule. Content from a variety of voices tells readers that you’re committed to and interested in the opinions of female experts as much as male ones, and a selection of contributors is much more welcoming.

Encourage, support, and be patient with writers with extra caring responsibilities

It is no secret that in many countries, women take on the majority of unpaid caring responsibilities for older and younger family members. This in turn affects their ability to donate time to other activities such as blogging or reviewing, as well as writing book chapters or undertaking impactful activities. We’ve experienced a ‘rejection rate’ from female academics around two to three times higher than from male ones (where potential contributors decline the invitation to write), with reasons given for declining to contribute almost always relating to childcare responsibilities.

Contributors and experts with family responsibilities, whether male or female, certainly value a more flexible deadline and a supportive approach. Failing to invite an academic or expert to speak or contribute because you know they have other responsibilities is not acceptable; your project or event may be something that they can be involved with in the future.

There are other issues of representation that have not been discussed in this article: the absence of trans people in more mainstream academic discussion, the less than healthy representation of minority ethnic groups, and the ratio of book authors as opposed to book reviewers. And of course, one woman does not speak for all women, just as one man does not speak for all men. But hopefully this can be a starting point for a healthier representation of views and discussion from under-represented groups in academia and experts in the news media.

Contribute: Tell us about your favourite academic and alternative bookshops 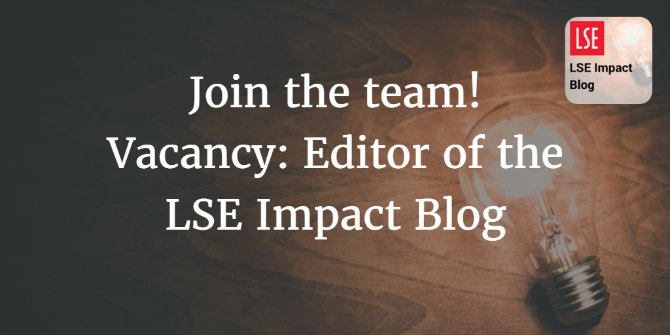 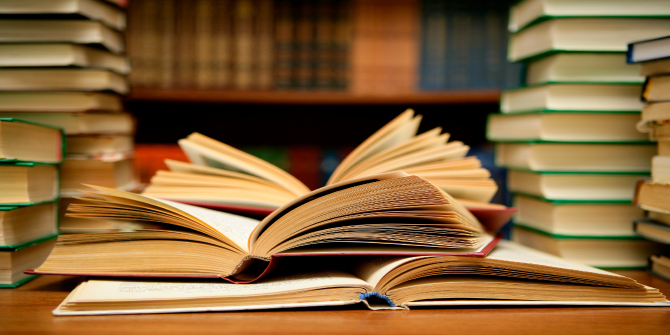 Reader Survey: What Do You Value about LSE Review of Books?