This book argues that a central aspect of democratization in the Middle East should include reforming the justice system. Focusing on probation, it proposes a three-tier model to understand efforts to reform penal practices, develop community-based alternatives to punishments, and promote the greater participation of society, featuring case studies from Russia, Estonia, and especially Latvia. Ruth Houghton encounters many unique insights into Latvian social and political culture, useful for future development projects. 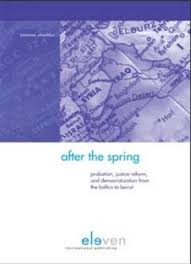 After the Spring: Probation, Justice Reform and Democratization from the Baltics to Beirut. Johannes Wheeldon. Eleven International Publishing. June 2012.

It was March 2002; spring in Latvia, and the Latvian Legal Reform Programme was about to begin. Funded by the Canadian International Development Agency as part of the $54.9-million Partners in Transition project, this project involved Canadian trainers joining Latvian participants from the Ministry of Justice to create the new Latvian State Probation Service (SPS). Changes to the probation and punishment system in Latvia started in 1990s with the abolishment of capital punishment and drafting of new Criminal Law, and this project aimed to present probation programming as an alternative to previously tried governance projects. Project Manager Johannes Wheeldon – now a Postdoctoral Research Fellow at the Department of Political Science and Criminology at Washington State University – aims in this book to tell the stories that came after that spring, asking what lessons can be learnt from the probation programming in Latvia and how those lessons can help the international legal assistance projects in the Middle East and North Africa (MENA).

Other similar projects focusing on alternatives to prison for youths, including the Penal Reform International’s Middle East and North Africa project based in Jordan, have not gone far enough in attempts “to broaden policy debates and improve the dialogue and cooperation among justice agencies” (p. 260) argues Wheeldon. At first glance the ambitious aim of the book, to catalogue the lessons from Latvia and apply those findings to MENA, is fraught with limitations, dutifully highlighted by Wheeldon, such as the difference between the Latvian situation and MENA. Instead, Wheeldon has crafted a “Three-Tier Model” of country context (Chapter 4), organisational constraints (Chapter 5), and individual challenges (Chapter 6) that acts as a way to address the country specifics, to aid and guide the design of projects.

The main body of the book explores the components of this Model, and at times the book reads as a how-to manual with its detailed descriptions of seminar-style discussions and role-plays undertaken during the Latvian project. However, the critiques at the end of each section show that the purpose of the book is not to prescribe a one-size-fits-all framework, instead it is offered as a source for the start of discussions on best practices, at all times taking into account country specifics. For example, study tours to Canada were successful, but they can be perceived as extravagant shopping trips or tourism and the book highlights that any tours organised to the US for projects in MENA would be unlikely to have a positive impact because of the large incarceration rate in the US. The antidote presented throughout is to increase participation and foster stronger relations between the host and donor states. The seamlessness with which Wheeldon moves between discussing lecture-style presentations to drinking sessions is demonstrative of the type of knowledge transfer advocated; in an attempt to eradicate the traditional dichotomy between expert/learner, Wheeldon shows a two-way process.

The “Three-Tier Model” is one of three contributions to the literature on legal technical assistance. The second is this focus on probation programming. Breaking away from the focus on elections, the judiciary and legal professions and legal institutions, Wheeldon argues probation programming can play an important role in democratisation because projects “facilitate dialogue, debate, and deliberation” (p. 3). An obvious question – and one that scholars including Carothers have tended to asktend to ask – is does it work? Can aid democratise? When measuring the success of a development project, in Chapter 2, tables are included to show how overall the prison population has dropped from 8831 in 2001, to 6780 in 2010 (pp. 70-71). Side-lining the question and labelling the Latvian project as a success, Wheeldon purposefully focuses on the how and why. This is one of a number of assumptions made. Wheeldon also has to assume that the project was entered voluntarily by Latvia, though accepting the international pressures from the EU, and that it was “a collaborative endeavor” (p. 88). The democratising potential of probation programming rests on it being participatory, without these assumptions the crux of this argument slightly wavers.

The third novel contribution is Wheeldon’s research methods outlined in Chapter 3. More than 50 consultants, trainers and participants were interviewed after 4 Canadians and 19 Latvians were selected to map their experiences of the Latvian Legal Reform Program. Mind-mapping and concept-mapping are persuasively used by Wheeldon to explore user-generated research as a response to the limitations of quantitative research. Throughout, maps and diagrams complement the text. However, some of the visual representations over-simplify complex debates.  Where his prose cuts across the chapters, showing connections between country context, organisational constraints, and individual challenges, the diagrams do not always demonstrate the extent to which these will overlap and inter-sect. As part of his reflexive research, an attempt to acknowledge how his role in the project impacts the findings, the chapters are interspersed with intermissions in which Wheeldon shares with the reader background information.

Behind these diagrams and anecdotes is a portrayal of the complicated process of democratisation, and the various levels at which it takes place. Wheeldon explores the democratisation of education and training and the way in which probation programming can act as a bridge between the democratic practices in the newly-created SPS and deliberation within the communities.  The bridge is not complete. In 1999, Carothers warned that researchers “should talk not just with those who took part in or directly benefited from the aid project in question”. Wheeldon himself asks “who should get invited to that discussion?” (p. 6). One woman was clearly left out; “Once [an] angry mother of a juvenile offender phoned headquarters. She was very worried about what we are doing with her son” (p. 198, citing Jurevičius). It is unfair to criticise Wheeldon for ignoring the voices of the service-users when his focus is on the participants in the project, but this “mishap” highlights that further research into the response of service-users to these democratisation efforts must be undertaken.

Packed  with unique insights into Latvian culture and development projects, Wheeldon also offers an optimistic spin on the international development debates. With more emphasis on the Baltics than Beirut, Wheeldon’s “Three-Tier Model” could be used as a guide when designing future development projects, or a useful tool to consider, following the recent “Egyptian Summer” that came after the spring.

Ruth Houghton is currently studying for an LLM at UCL. In 2011 she graduated from The University of York with a degree in English and History and subsequently completed the Graduate Diploma in Law at The University of Birmingham. Her current research focus is on the UN Human Rights Council with a particular interest in theories of democracy and politicisation. Read more reviews by Ruth.

Posted In: Europe and Neighbourhoods | Law and Human Rights | USA and Canada