Two revolutions, a massacre of unarmed civilians, a civil war, a drug-smuggling highway, brazen corruption schemes, contract hits, and larger-than-life characters who may be villains…or heroes…or possibly both. In Restless Valley, Philip Shishkin focuses on the powerful and the powerless in Kyrgyzstan and Uzbekistan. This is a rare breed of book: informative, fast paced and yet palpably intimate, concludes Lewis Garland. Restless Valley brings us on a compelling ride through the recent history of Kyrgyzstan and Uzbekistan, two central Asian states seated on Afghanistan’s northern border. Written by Philip Shishkin (a former staff-journalist at the Wall Street Journal), Restless Valley draws us into the intrigues and machinations of a region wrought with corruption, inter-ethnic violence and poppy-powered organised crime, introducing us to a novelistic cast of ruthless dictators, courageous human rights activists, ambiguous purse string-holders and puppet masters. Given the complexity and wealth of material, Restless Valley could easily have become little more than a compilation of true-crime stories. What Shishkin achieves instead is a book which, while fully delivering on drama, always remains nuanced and sensitive in its portrayal of characters and ultimately of the region as a whole.

The bulk of Restless Valley focusses on Kyrgyzstan between 2005 and 2012. This period covers the Tulip Revolution of 2005, the rise and overthrow of Kurmanbek Bakiyev and the tumultuous fallout from this second revolution. Throughout the book Shishkin uses personal stories as a tool through which to explore the wider political, social and economic trends within the region.

Symbolic of the political power games endemic in Kyrgyzstan is the story of ‘the grey cardinal’, Medet Sadyrkulov, whose narrative is played out throughout the book. Sadyrkulov was an ambiguous individual whose role in Kyrgyzstan’s history is difficult to place but also to underplay. On the one hand Sadyrkulov is a Machiavellian villain, a chief-of-staff under two presidents who oversaw wide-scale election rigging and is assumed to have been responsible for the disappearance of “half a million dollars from the state coffers”. On the other, Sadyrkulov, particularly in death, has become seen as a victim of egregious presidential nepotism. Disagreements with powerful members of the ‘first-family’ led to his downfall under both regimes. Sadyrkulov was subject to mafia-esque threats (once receiving a human finger and ear in an anonymous Christmas present) and was ultimately the victim of a mysterious ‘car accident’ – later revealed to be a contract-killing ordered by president Bakiyev’s brother.

Nepotism (this time in the field of finance) is again addressed in the story of Eugene Gourevitch, a Jewish-American financier who became the international consultant for the sprawling and utterly corrupt business empire of the president’s son, Maxim Bakiyev. Gourevitch’s engrossing story sees him amassing a fortune alongside Maxim, masterminding vast international embezzlement and laundering schemes before, on finding himself a marked man, being smuggled out of Kyrgyzstan by shadowy Chechen operatives. We leave Gourevitch standing trial in Italy having recently become an FBI informant against Maxim Bakiyev.

In some ways this is the classic story of a ‘dictator’s’ offspring taking advantage of their position. This story also highlights an uncomfortable reality; the close, perhaps inseparable, relationship between political power, international finance and organised crime – particularly the willingness of ‘legitimate’ partners (including prominent US senators) to turn a blind eye. In Gourevitch’s words, “they turned off common sense, but they were paid very well”.

Ethnic tensions, rooted in Stalin’s divide and rule policies, have long simmered in Kyrgyzstan, particularly between the majority Kyrgyz and the minority Uzbek communities. However, after the overthrow of Bakiyev in 2010 these tensions erupted into violence as strident Kyrgyz nationalism clashed with Uzbek demands for equitable representation. Around 500 people were killed in these ethnic clashes. During these clashes Azimzhan Askirov emerged as Kyrgyzstan’s principle prisoner of conscience having been imprisoned for his supposed role in the murder of a Policeman. Askirov was a prominent human rights activist, known for his investigations into police brutality. His trial was awash with irregularities including the intimidations of witnesses and an attack on his lawyer during which a briefcase containing legal papers was stolen. There is strong evidence that these charges were fabricated in retaliation for Askirov’s previous investigations. Even Rosa Otunbayeva, Kyrgyzstan’s former president, conceded that as “a human-rights defender, (Askirov) annoyed the policemen…Perhaps there’s an element of revenge”. Despite this evidence Askirov’s sentence has been repeatedly upheld and the case remains a source of major ethnic tension.

Whilst Shishkin paints Kyrgyzstan as a country characterised by perpetually evolving power-games, Uzbekistan, conversely, is portrayed as a state with few uncertainties. Political and economic power lies firmly in the hands of one man, Islam Karimov, Uzbekistan’s president since 1989.

Karimov gained notoriety in 2002 for boiling a number of political dissidents alive. Restless Valley does little to change this image. Among the numerous rights violations highlighted in this book, the Uzbek penal system stands out as especially horrific. Accusations of torture are rife and multifarious. One interviewee describes how the guards “string (his brother) up on a wall and beat him until he passes out. In one session, his skull was cracked, and for weeks the wound festered with blood and pus”. Shishkin later explains how authorities at the “dreaded” Jaslyk prison sometimes refuse to hand the bodies of dead inmates to their families for burial “in an apparent attempt to hide evidence of mutilation”.

Karimov’s disregard for human rights is not reserved for those incarcerated. Opposition and dissent within the state is dealt with swiftly and brutally. One such example is the Andijan Massacre of May 13th 2005. Shishkin tells the story of Andijan through a series of interwoven narratives including that of Bohtiyor Mahtarov. Mahtarov had been imprisoned for his links with the ‘Andijan 23’, a group of businessmen charged dubiously with an Islamist conspiracy (a charge commonly used to justify such crackdowns, particularly to the US). On 12th May a hoard of men attacked the prison, freeing the businessmen and hundreds of other prisoners including Mahtarov. The group took a number of government officials hostage before convening an impromptu rally. The crowds at the rally swelled, their demands shifting to wider issues of economic and political justice. Mahtarov meanwhile fled in search of his family. On finding his wife the couple found themselves hemmed in by military vehicles and personnel who were firing indiscriminately into the crowd. Some reports claim those killed in Andijan numbered upwards of 1000. Mahtarov and his wife escaped, living in a squalid refugee camp in Kyrgyzstan before being resettled in Finland where he now runs an Andijan refugee support group.

One repercussion of the Massacre was that the US, under pressure from Human Rights groups, publically denounced Karimov’s actions. Karimov retaliated by evicting the US from their Uzbek Air base, a major staging-post for their war in Afghanistan. However, the US’s ‘moral’ stance was short lived. After a deterioration in US-Pakistan relations Uzbekistan soon re-emerged as an important regional ally. In Shishkin’s words, “Washington rehabilitated the wily Uzbek strongman because it needed his country as a warehouse”.

Restless Valley is a rare breed of book: informative, fast paced and yet palpably intimate. Shishkin succeeds not only in capturing and delineating the complex power dynamics of the region but also in explaining the impact of these dynamics on the ground. Restless valley is the perfect starting point for anyone unacquainted with Central Asia and may indeed be a catalyst for greater interest in the region.

Lewis Garland is a freelance journalist and social justice activist. He has written on issues ranging from the rights of asylum seekers to post-conflict reconciliation. Lewis holds a MSc in Human Rights from the University of Birmingham and a BA in History and Politics from the University of Warwick. He has previously worked for the International Centre for Ethnic Studies, Sri Lanka. Lewis tweets as @lewisgarland. Read more reviews by Lewis. 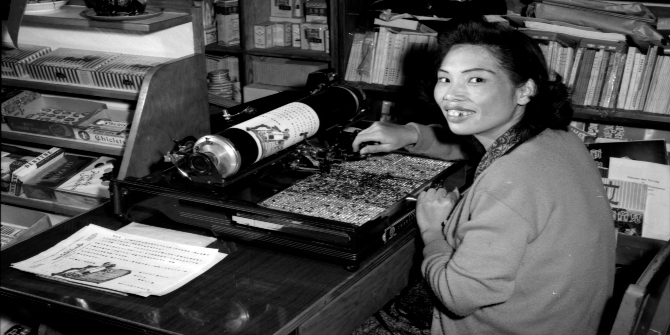