Is citizenship is a worthwhile object for feminist politics and scholarship, or should a different language be used to express belonging and equality? Beyond Citizenship? Feminism and the Transformation of Belonging aims to push debates about citizenship and feminist politics in new directions. Chapters cover sexual citizenship, reluctant citizens, and activism and democracy. Highly recommended for gender studies students, concludes Melanie Conroy. 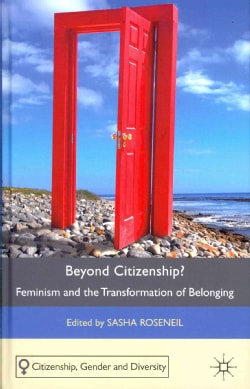 “The saddest thing was when I heard the leader of the Tory party quoting back my own words [about promoting active citizenship among women living in poverty].” Janet Newman – Emeritus Professor in the Faculty of Social Science at the Open University – quotes these words from an interview with a feminist activist in the UK as the incipit to her essay about the difficulties of reconciling feminism and active citizenship. For Newman, feminist reclamations of rights are often misunderstood because they are made through masculine categories and concepts. It is not surprising that feminists have hesitated as to whether to adopt the natural law rhetoric of their bourgeois male counterparts. There is little doubt that rights and responsibilities of citizenship were invented for men. Should women be granted the privileges of masculine citizenship, or should citizenship be rethought with the needs of women in mind? This is the essential question posed in the new volume Beyond Citizenship? Feminism and the Transformation of Belonging: do masculine models of citizenship fit the goals of women and feminist activists?

The issues raised in this volume are not new. For decades, feminists have disagreed about how to end political inequality between the sexes, how to compensate women’s labour adequately, and the difficulty of forging a unified feminist front politically. What is unique is the historical reach of these scholars, which extends from Enlightenment cosmopolitanism (Chapter 3) to post-colonial citizenship (Chapter 11). The chapters in this collection are extremely diverse – potentially to a fault – no doubt because the book had its origins in a 2010 conference “Beyond Citizenship?”, a conference that brought together scholars of cultural studies, history, and sociology. Some of the best chapters tie personal experiences to the theoretical question of what citizenship has to offer feminists. For example, Lynne Segal’s commentary draws on her transformation from an anarchical anti-nationalist in 1980s Australia to a more politically moderate academic (Chapter 4). Likewise, Karen Frostig recounts her experience making art in Vienna and Riga as the daughter of Holocaust survivors; this chapter is less obviously related to feminist issues but adds a great deal to the discussion of problems of modern citizenship – particularly trauma, multiple allegiances, and confused cultural inheritance (Chapter 10).

Most of the writers affirm – if with significant caveats – the promise of equality and an improved future implied by Enlightenment concepts of citizenship, but they also point to failures in securing that promise, primarily the limits of individualist thinking for social transformation. Janet Newman confronts the sometimes wilful misinterpretations by governments of feminist reclamations for increased rights and financial support for women, especially poor women (Chapter 5). Newman draws on her 2012 study, involving interviews with 56 female activists living in the UK. In this study, Newman found that women activists took a dim view of discourses of citizenship and worker productivity; they “were ambivalent about viewing paid work as the route to equality. Most had complex and fractured working lives, moving between sectors, between part-time and full-time employment, and between paid and unpaid work.” These are women who do not speak the language of citizenship, who do not see themselves as model “citizen-workers,” and yet they work to promote equality between the sexes and among women. They are in many ways model citizens, but they are not compensated for that work of citizenship. Women activists speak a language of equality grounded in their unequal experiences that government elites do not understand.

The problems of reconciling women’s experience with discourses of citizenship date back at least as far as the French Revolution and the Declaration of the Rights of Man and the Citizen. In her chapter on early feminism, Tone Brekke asks how cosmopolitanism – an elite, masculine way of seeing the world – can be rethought in a more collectivist light (Chapter 3). Brekke argues that feminist cosmopolitanism has been collectivist and sentimental in nature, since the beginning of modern feminism in the late eighteenth century. Because early feminists were excluded from the “universal” discourses of political rights by nature of their biological differences, they opted to create a non-rational appeal to emotions that would trump the pseudo-universality of masculine appeals. Drawing upon the work of feminists and sentimentalist novelists from the years after the French Revolution, Brekke shows how sentimentalism gave women a language for a movement that was both international and collective, well before the heyday of socialism in the mid-nineteenth century. Brekke’s positive re-evaluation of these sentimental feminists (as against the liberal feminist Mary Wollstonecraft) demonstrates that women could resolve the problems of female citizenship differently and remain resolutely feminist.

This book is highly recommended for academics with an interest in gender studies. It is perhaps less appropriate to a general audience because it presumes familiarity with feminist debates, as well as sociological and psychoanalytic concepts. For those who are initiated into the language of the qualitative social sciences, it is a rewarding read.