In Seeing Politics: Film, Visual Method and International Relations, Sophie Harman explores film as a method and output of research in International Relations, drawing on her experience of creating the narrative feature film, Pili, informed by decolonial and feminist approaches. In presenting the making of the film as a process of learning and a method capable of finding the limits of seeing in IR and pushing beyond them, this book will be valuable reading for IR students and scholars, as well as social scientists interested in discussions of methodology and representation more broadly, writes Katarina Kušić. 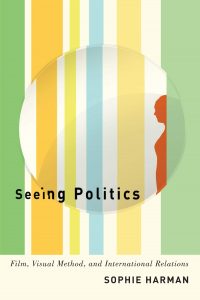 Sophie Harman’s Seeing Politics is about film as a method and an output of research. After almost two decades of undertaking research in global health and the governance of HIV/AIDS, Harman created Pili—the first narrative feature film in International Relations (IR). The aim of a film that captures three days in the life of Pili, a woman living with HIV in Tanzania, might seem straightforward: to humanise and ‘make real’ the spate of statistics and essentialised stories that are mobilised in the political economy of global HIV/AIDS governance. The film does this exceptionally well—a fact confirmed by the multiple awards and nominations it has received since its completion. The book, however, does much more: it presents the making of the film as a process of learning and as a method capable of finding the limits of seeing in IR and pushing beyond them. Harman’s monograph not only talks about how the lives of women in Tanzania stay hidden in international politics, but also uncovers the everyday, national and global dynamics that shape what and how we see in the social sciences.

The how and why of making Pili are addressed in the two chapters that make up the first part of the book. Chapter One presents the rationale for the use of film. First, Pili provides a ‘different aesthetic on HIV/AIDS’ (24) by showing a story of a single mother in rural Tanzania. Second, film brings together decolonial and feminist methods that create a space for African agency that ‘confronts distinctions between the knower and the knowns and allows the invisible to represent and speak for themselves’ (2). Practically, given that Pili represents the stories of about 80 women that Harman spoke to, this refers to the fact that the women who helped create the narrative of the film were also the cast. Third, film can tap into the affective potential of moving image and sound. While Harman here builds upon the aesthetic turn in IR that reads film, she also successfully highlights the novelty of writing film: not only as a ‘side project’ of creating impact for existing research, but as a method in itself. And lastly, film is used as a method because of its audience—the particular audience of a narrative, rather than a documentary film. While Harman had first planned to develop a docudrama, a narrative film addresses both the demands of ethical research (it is clear that the women in the film are acting; no one’s life is exposed) and opens a path to a larger audience.

The second chapter explores film as a method of seeing and focuses on the collaborative aspect of Pili. The film was produced by Harman and directed by Leanne Welham but involved the women from the Pwani region at every stage: they shared their stories, ‘tested’ the script that Welham and Harman created based on their lives and they also acted in the film. In line with the developing trend of providing ‘honest’ accounts of methodological processes, this chapter explores the messy process of transnational feminist collaboration across the pre-production, production and post-production stages: the choice not to use a production company, hiring a UK-based crew that had access to equipment, involving NGO workers as assistants/translators that made up the Tanzanian part of the crew, negotiating the story with the women and the director and navigating the minutiae of payments and consent, alongside many other considerations.

Importantly, this account is written with an understanding that hierarchies in research are inevitable: even if they were denied, they would remain ‘latent, informal, and hidden’. The question thus becomes refreshingly pragmatic: ‘how to progress and create co-produced knowledge within a hierarchical system without exacerbating inequalities that stop women such as Pili from seeing and being seen’ (65).

The second part of the book moves on to consider ‘the politics of what stops us from seeing and being seen’ (16). It does so on three levels: local, state and global. Chapter Three opens up the everyday politics of co-produced research. It recounts different situations of discomfort that are inevitable in such a method: the wealth and racial differences that set apart the cast from the crew (to the extent that the cast did not want to eat with Harman at the same table at the beginning of the shoot (107)), navigating different expectations and temporalities of work and the change of perspective once it became clear that the film would indeed make money. The importance of publicly narrating these events cannot be understated—too many conversations about methods save the discussions of big and small failures and discomforts only for informal chats.

Chapters Four and Five focus on the state and global dynamics. Chapter Four intervenes in the literature on gatekeeping practices and patronage networks in African states by showing how one becomes implicated in them in the process of creating a film, while Chapter Five addresses the global political economy of film distribution that makes it difficult for films like Pili (low-budget, without famous backers, ‘foreign language’, made by women) to enter global distribution chains. In these two chapters, we learn more about the minutiae of carrying out the project, but these details are also employed as a method of seeing: seeing how gatekeeping practices at various levels work to enable some stories to be heard and to keep others invisible.

In accounting for the materiality of research, Harman makes an important intervention: she challenges the idea of a method as a straightforward recipe and shows that discomfort is here to stay. Research steeped in global inequalities and cultural differences is always going to be messy, but feelings of uneasiness should not lead to paralysis (123): there are techniques that might help us deal with these processes in important, albeit always imperfect, ways.

Because the discussion of film in the book is based in the ‘aesthetic turn’ in IR, the politics of the narrative itself could be examined further. Harman draws on feminist theory to recognise the dangers of essentialising human experience (27) and shows the different ways of seeing the particularities of Pili’s life: for example, the women wanting to include micro-lending as a positive force in the story, while Harman herself has published on the negative economic and gendered effects of such schemes. However, the construction of narrative is not only an issue of triangulation and valuing different types of data (31), but is also steeped in the politics of telling and consuming stories. While the narrative turn in IR is briefly mentioned (52), it seems that more important questions lurk in the economies of storytelling that both the book and the film use so powerfully: as we move beyond academia and away from academic formats, who are these stories for and why are certain groups attracted to them?

Such questions, however, are inevitable in such a rich project: the diversity of the issues that the book addresses will leave many readers wanting to see particular points developed further. It is precisely in this radical opportunity to see politics and the limits of our seeing differently that the book makes its most important contribution. As such, Seeing Politics will be valuable reading not only for IR students and researchers, but also for social scientists interested in discussions of method and representation more generally.

Dr Katarina Kušić is an ESRC Postdoctoral Fellow at the Department of International Politics at Aberystwyth University. Her research explores how those ‘being improved’ by development, statebuilding, and peacebuilding efforts experience these processes and what their experiences can tell us about international politics. She is particularly interested in fieldwork-based methods, conversations between studies of South East Europe and postcolonial and decolonial thought, and liberalism as politics of improvement. Her co-edited volume (with Jakub Záhora), Fieldwork as Failure: Living and Knowing in the Field (of IR), is forthcoming in 2020 with E-International Relations