In Disappearing War: Interdisciplinary Perspectives on Cinema and Erasure in the Post-9/11 World, editors Christina Hellmich and Lisa Purse bring together contributors from across a range of disciplines to explore how depictions of contemporary warfare are frequently shaped by absence, erasure and a hierarchy of grievability. This is a theoretically robust, compelling and intriguing contribution to the ‘aesthetic turn’ within International Relations scholarship, writes Julian Schmid. 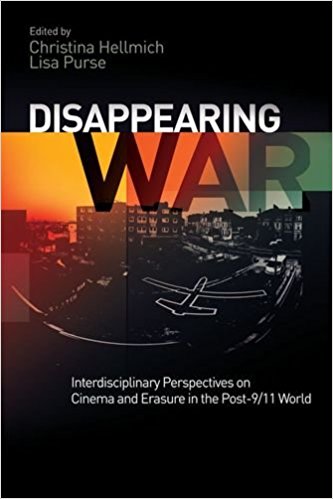 In recent years, International Relations and other disciplines exploring war and warfare within political research have experienced a widespread diversification of methodological, theoretical and epistemological tools and perspectives. In Disappearing War: Interdisciplinary Perspectives on Cinema and Erasure in the Post-9/11 World, editors Christina Hellmich and Lisa Purse adopt a consciously cross-disciplinary approach in bringing together ten authors working across film, literature, theatre and media studies, political science and International Relations as well as film practitioners.

The underlying assumption of the authors is that war – detached and removed from the lives of most people in the West – can in many cases only be understood through mediatisation, which entails the creation of a narrative through cultural reproduction rather than through real-world experience. They furthermore identify film and cinema as the institutions that seem crucial for these mediated tropes as they allow for forms of narrative, immersion and eradication that are very powerful.

Across their individual contributions, the authors ask questions about omissions in the mediated experience of the ‘War on Terror’; what erasures of specific elements of war are representationally characteristic; and what consequences these absences bear for cultural understandings of warfare. Drawing on a broad body of literature, Hellmich and Purse formulate the premise of the book in the introductory chapter by suggesting that their focus on the presence or absence of civilian suffering as well as the hierarchy of grievability, ‘sedimented in the mediatisation of the war on terror in Western media, has material, realworld consequences’ (5).

The second chapter, by political scientist Cora Goldstein, presents a historical account of US film and Hollywood’s ties to the political realm. According to Goldstein, the war films of the 1940s and 1950s erased civilian casualties from their visual texts as they were designed by Hollywood in cooperation with political actors to give the impression of a clean, purified and victorious war and to create and distribute legitimacy. War films became more graphic in the second half of the twentieth century, while still omitting certain forms of destruction, such as the killings of civilians through bombings.

Post-9/11 films have depicted violence against civilians by focusing on the individual experience, one factor being that it is easier to display individual suffering than large-scale devastation. But while the reasons for violence are not discussed, the killing of combatants and non-combatants comes to seem rational and surgical. Goldstein’s chapter serves as the ideal basis, theoretically and historically, for the rest of the book. It addresses the maiming of the human body, the destruction of urban spaces and infrastructure and the erasures of suffering and killing, raising questions of morality and legitimacy that inform the other chapters. 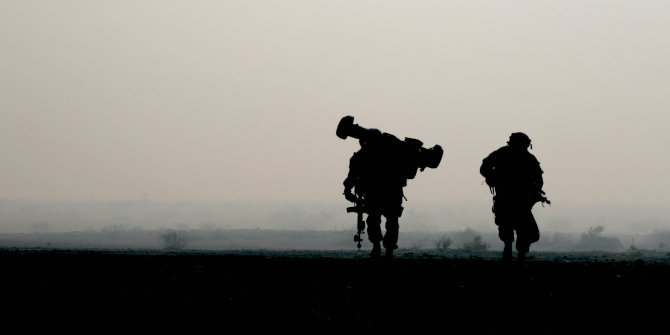 The contribution from Agnieszka Piotrowska, a documentary filmmaker, as well as those by political researchers Thomas Gregory, Jessica Auchter, Purse and Shohini Chaudhuri, tap into the theoretical spaces opened up in Chapters One and Two. Piotrowska’s essay addresses how operators of targeted killing are affected by their actions. Purse and Chaudhuri identify cinematic patterns and representational devices through which aspects of war and violence are made visible or rendered invisible within Hollywood blockbusters of recent years.

Political scientist Robert Burgoyne, as well as Gregory and Auchter, place focus on the corporeal experience of war and how bodies are displayed in film and media. Burgoyne illustrates how the dramaturgical focus lies in visualising the physical challenges experienced by US soldiers at the expense of non-American casualties. Gregory and Auchter address similar issues, arguing that violence in films such as Zero Dark Thirty (2012) or American Sniper (2014) is presented as being highly controlled, calculated and clean. The erasure of certain bodies and the maintenance of others create a hierarchy of suffering, as Gregory argues, while Auchter sees a political move behind the question of which bodies actually count as bodies and which don’t. All three chapters thereby tap into Judith Butler’s philosophical account about which lives are (made) grievable, Precarious Life: The Powers of Mourning and Violence (2004).

Butler’s concept is directly discussed in a few of the chapters as her work addresses questions of erasure, visibility and subjectivity. Even more so, most contributions rely heavily on theoretical concepts taken from International Relations, philosophy and sociology, such as Jean Baudrillard’s Hyperreality, James Der Derian’s Virtuous War and Hannah Arendt’s work on ‘the banality of evil’.  Theoretical debates included in the book also move across different strands of Marxism, critical theory, post-structuralism, post-colonialism, constructivism and psychoanalysis.

Depending on the specific interests of the reader, the individual chapters might be of varying relevance; however, the contributors presume a relatively sufficient knowledge of the theoretical debates and theorists mentioned above. Without this, most chapters will be hard to understand. Furthermore, the essays tend to put a definite focus on a very specific sample of films, which again requires at least some basic familiarity with these texts. However, many of these are quite easily accessible online, including the fictionalised 30-minute documentary 5,000 Feet is the Best (2011), which is well analysed in Piotrowska’s captivating contribution about drones.

Disappearing War displays a theoretically robust and intriguing contribution to the debate around the ‘aesthetic turn’ in International Relations and its connections to narrative, visuality and popular culture. The analytical chapters of the book address both feature and documentary films from the different perspectives of IR and film scholars as well as filmmakers, all of whom share the assumption that cinematic representations of violence and the ‘War on Terror’ have wider implications for the world real humans live in. Overall, the theoretical and methodological diversity of the book makes it an exciting and inspiring read. Disappearing War is highly compelling and will be stimulating for a disciplinary debate that still has many unexplored spaces.

Julian Schmid is currently a PhD Researcher and Associate Tutor at the Department for Politics and International Studies at the University of Warwick. His research project addresses the crisis of security concepts, heroism and the connections between popular culture and post-'9/11' security discourses. Julian's research interests cover areas such as International Relations, security and surveillance studies, US foreign policy, war and militarism, critical geopolitics, popular culture, film studies, post-structuralism, aesthetics, visuality and narrative. As Associate Tutor, he is also teaching on undergraduate modules on Theories of International Relations and US Foreign Policy.