By 2030 African cities will have grown by more than 350 million people and the continent will have surpassed the 50% urban mark. Africa’s Urban Revolution aims to provide comprehensive insight into the key issues – demographic, cultural, political, technical, environmental and economic – surrounding African urbanization. This book will provide policy writers with much-needed information as well as various avenues through which to improve cities for future generations, writes Jonathan R. Beloff. 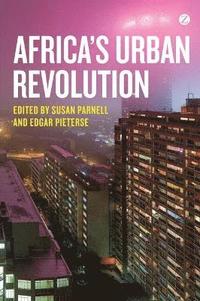 Africa’s diversity is not only confined to the jungles, savannas and desert that ecologically occupy the continent. It encompasses the complexities of a continent that is slowly developing to become the next economic centre of the global economy. Unfortunately, most people know Africa based on its current conflicts, food scarcity and underdevelopment. Another media-covered topic, covered with a sense of excitement and promise, is of African cities that depict a non-western idea of sociological design. The United Nations Department of Economic and Social Affairs states that African cities mass more than 414 million people, which is roughly 40% of the total African population. Their estimates expect that by 2030, 50% of Africans or 744 million will be residing in cities. This number increases to 1.265 billion or 60% of Africans by 2050 (p.1,7). With this dramatic increase in urban growth, academic researchers and public policy specialists do not focus enough on African cities.

Editors Susan Parnell and Edgar Pieterse, alongside twenty-one other academic scholars, attempt to bridge the knowledge gap by writing on a wide range of topics that includes: proper urban planning for economic development, domestic and international environmental protection and response measures, access to education, religious expression through the city-based civil society, and many other important subjects. Each of the chapters provides a glimpse into its subject material by utilizing both theoretical assumptions and case examples throughout sub-Saharan Africa. Readers will leave with an impression that each of the chapters can itself be used as the basis for a book specifically examining that particular topic.

Even with the diversity of topics throughout the book, all the authors agree on two major problems. The first is that African urbanisation has yet to be properly examined by developmental scholars, public policy researchers, and by people interested in African cities. Every chapter begins by describing the future population growth of cities and how not enough information has been collected on this subject compared to others that are equally as important. This information gap has created the problem of lack of proper urban planning by international institutions and domestic governments. The United Nations, International Monetary Fund, World Bank and other global institutions still have not properly established policy recommendations for African governments that will assist in the development of cities. In particular with food production, Crush and Frayne write that there is too much focus on food security rather than food availability by the United Nations Development Programme (p.110-112).

Many African political leaders still encompass an idealism centring on rural development over urban development, which will hinder overall development during and after 2030. African cities already contain some of the most notable slums, with an average of 43% of city dwellers living in slums (p.62). This number will only increase given anticipated population growth figures. African leaders need to take the correct steps in urban expansion to bring the population and the environment into beneficial coexistence. In addition, there needs to be proper urban planning to develop necessary infrastructure for businesses, for example, a paved road system, reliable electricity and clean water. Social goods such as education and health centres are also necessary in order to produce a skilled labour force.

The major drawbacks of the book are its lack of policy solutions for African urbanisation and its lack of focus on conflict cities. Most of the chapters are able to articulate important and growing problems that African cities are facing. However, they predominantly do not provide viable suggestions for specific improvements. Instead, they provide theoretical solutions that are rather vague. Some of the suggestions seem more in line with political ideology than with empirical data or the needs of individual cities. An example is from Duminy, Odendaal, and Watson who focus more on making education ‘progressive’ than on its practical usage for African social, political and economic development (p.184-5). Having said this, the penultimate chapters do focus more on providing practical solutions to African urbanisation problems. However, each of these could have benefited from applying a specific solution to their particular case study.

The second criticism relates to the lack of discussion on conflict cities. The book provides an excellent chapter by Beall and Goodfellow on how cities transition from a state of conflict to peace. In particular, they focus on cities in the African Great Lakes like Kigali, Kinshasa and Goma that have experienced and to some extent still contain some armed violence. However, the book does not discuss enough of this important topic. Many cities throughout Africa are currently experiencing wars, armed conflict and rebel action. These cities should have been better addressed for readers to understand how conflict uses urbanisation to benefit armed struggle. This topic is significant when reading about events in Bangui, Central African Republic, Mogadishu, Somalia, and cities throughout South Sudan.

Africa’s Urban Revolution is successful in adding scholarly research into the often forgotten topic of Africa’s urban expansion. Over the next few decades, African cities will grow at a significantly high rate that will put new pressures on existing city infrastructure and structure. Public policy changes are now required to prepare cities for the 21st century, which will see Africans living in urban settings rather than rural farmlands. This edited book will provide policy writers with much-needed information as well as various avenues through which to improve cities for future generations. African-focused, developmental and other social science departments at universities should include this book as a standard textbook for their students.

Jonathan R. Beloff is a PhD student at the School of Oriental and African Studies in London, UK. His academic concentration is on economic development and international relations of the African Great Lakes region as well as the Horn of Africa. You can follow him on Twitter @JewswithRwanda. Read more reviews by Jonathan.

Book launch on at the Africa Research Institute on February 20th 2014: On 20th February Jo Beall (British Council) and Sean Fox (University of Bristol) will lead a panel discussion on how conflict and population growth affect Africa’s cities. The discussion is also the launch event for Africa’s Urban Revolution, a new publication from Zed Books.

The event is open to the public but registration is required, as places are limited. Please email info@africaresearchinstitute.org with your name and affiliation to confirm your attendance. You can join the debate on Twitter using the hashtag #urbanAfrica

More information can be found here.