A new class-in-the-making is emerging worldwide: the Precariat. A growing army of workers displaced in the globalized era, with no security, control over their time, nor hope for their future. Often threatened by precarity and poverty traps, they represent a new group of people in need of a charter of demands, according to Guy Standing, author of A Precariat Charter: From Denizens to Citizens. This book follows his previous success on the same topic; it is a thought-provoking and resolute challenge to the widespread consensus around neo-liberal policies, writes Elisa Pannini. 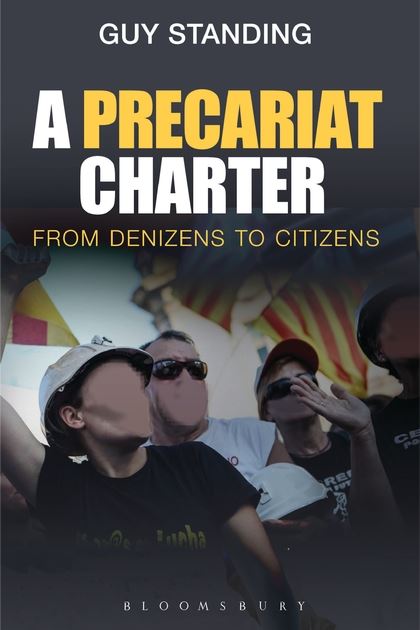 Guy Standing is Professor of Development Studies at SOAS, and co-president of the Basic Income Earth Network (BIEN). Throughout his career, Standing has worked on labour market dynamics and policy implications not only as an academic, but also as an advisor for governments and international bodies. Recently his research has focused on the insecurities and precariousness faced by workers in the globalised era. His previous work, The Precariat: The New Dangerous Class, outlined the characteristics of this new group of insecure workers that are progressively denied a growing set of rights usually granted to ‘full citizens’.

In this new book, Standing carries on the discourse about the Precariat and proposes an agenda that offers provocative thoughts for those interested in the organising of insecure workers. Indeed, according to the author, the precariat is ‘a-class-in-the-making that must become enough of a class-for-itself in order to seek ways to abolish itself’ (p.xi). The very notion of the precariat as a class is not undisputed, because of the heterogeneity of its members; however, Standing groups together migrants, working class children, and educated young people who nurtured bright hopes for their future. Those people have in common uncertainty, volatile labour, lack of occupational identity, and no control over their time; even though their characteristics are often very different, they all end up in the same disposable workforce necessary to the global economy converging toward the neo-liberal model.

The first part of the book analyses the nature and developments of the precariat phenomenon. Chapter 1 explores the various rights that are denied to the precariat, transforming ‘citizens’ into ‘denizens’. Denizens lack the basic civil, political, cultural, social, and economic rights that allow a decent life in modern societies. Standing draws a sharp distinction between the precariat and the ‘old’ proletariat; the latter was expected to be a stable source of labour framed in a set of welfare provisions and legal protections. According to Standing, the proletariat lacks the main characteristic of the precariat: being trapped in an insecure life.

Chapter 2 highlights the role of austerity measures after the 2008 crisis in worsening the conditions of the precariat through cuts in public spending and retrenchment of the welfare state. As a consequence of that, the precariat is growing (Chapter 3) as is apparent in many contexts of economic and social life across OECD countries. Chapter 4 confronts the ‘utilitarian consensus’ that shapes the governments’ actions and favours precariat impoverishment and even its demonization; neo-liberal policies are broadly accepted not only by conservative parties but also by the self-defined ‘progressive’ ones. This Chapter focuses particularly on the UK, with an interesting analysis of the rhetoric against the stereotype of the ‘undeserving poor’ that has been so constantly proposed to the public to become broadly accepted, even when there is little evidence to justify such a negative perception.

In the second part of the book, Standing argues that in order to improve its condition the precariat needs to be recognised as a ‘distinctive social group’ and articulate its own identity. Then, it needs some forms of representation to fight for the redistribution of resources that are currently unfairly allocated. Standing gives us 29 articles or actions that should be taken in order to give the precariat and the weaker members of society a fair access to basic rights. Standing’s list includes some measures that require radical changes in the attitude toward more disadvantaged groups like migrants and disabled people. An important intervention is also advocated in the areas of benefit and education. On the whole many proposal are brought forward; some of them require primarily a change of mind-set and a cultural shift, others are proposal of specific interventions.

Of particular interest is how the author considers that ‘resisting the flexibilization of labour relations that came with globalization’ is an ‘historical error’ and that flexible labour practices should be accepted ‘in return of basic economic security as a right, for all’ (p.183). Standing opposes the classical ‘old’ position of unions trying to defend the acquired rights of core workers, as those rights are impossible to share with the whole globalised workforce. The precariat will never join the proletariat in its stability of labour, thus security should not depend on the career histories of workers.

A universal basic income is probably the boldest yet most concrete proposal among the 29 articles. Besides the ethical justification that ‘a basic income could be seen as a social dividend derived from our forebears’ investments and hard work’ (p.319), the author claims that this is the best way to give security to people, while satisfying basic principles of respect for them and for society as a whole. He proposes to shift expenses from benefits, tax breaks, and subsidies in order to give everyone a fair, equal basic income that would assure everyone the possibility to access all the basic rights available to citizens.

The book reads smoothly and is very accessible also to non-academic readers; it will interest anyone who wants food for thought upon modern work arrangements, life precariousness, and also possible alternative welfare and work policies in the globalised world. However, for a reader first approaching the ‘precarity’ issue, the first work on the topic by the author may be even more stimulating and provide a fresher perspective; its analysis of the phenomenon is indeed deeper and offers a complete theoretical framework on which this new work builds its arguments.

More information about the book launch at SOAS on 6th May 2014 is available here.