It was not uncommon during the Progressive Era of the United States (1890-1920) to find political journalists who immersed themselves into the study of history in order to find solutions for their present-day social and political problems. As they tried to alleviate social ills, caused by unregulated markets, inequality, excessive wealth and corruption, many of these reformers searched their nation’s past for answers. Herbert Croly, for example, in his influential The Promise of American Life (1909), ventured forth into studying the conflict between Thomas Jefferson and Alexander Hamilton over the role of government in a popular democracy in order to discover how the United States could cope with the challenges of the twentieth century.

Michael Wolraich, a prolific political journalist, finds himself here in a similar position. He emphasizes that the grassroots politics of the Occupy Wall Street and the Tea Party movements present similarities with the ways in which the Progressive movement functioned more than a century ago. At the same time, he finds that the Occupy movement’s rhetoric  is almost identical to the Progressive language of reform. As a result, he makes a compelling argument on the everlasting relevance of the Progressive Era: “By returning to the moment when America broke into two ideological factions,” he writes, “we can see more clearly what we’re fighting about and better appreciate the stakes.”

Wolraich’s account focuses on the rise, within the ranks of the Republican Party, of a small band of Progressive insurgents. They passionately fought against laisse-faire orthodoxy, sought to regulate concentration of wealth by supporting trust busting and promoted political innovations such as direct elections, ballot initiatives, judicial recalls and women’s suffrage. Initially, these rebels, who gathered around the uncompromised leadership of Wisconsin’s senator Robert “Fighting Bob” La Follette, were labelled as dangerous radicals by the establishment. At the same time, they enjoyed popular support from a public troubled with the transformations that massive industrialization had brought upon the once celebrated Jeffersonian republic of yeomen farmers and formed an alliance with muckraking journalists devoted to battle corruption. Their ideas also found receptive ears within the ranks of the Democratic Party which had experienced its own reform movement under William Jennings Bryan’s populism.

In the end, their crusade caused a long-standing realignment in American politics. The old division between North and South was replaced by an ideological division between conservatives and progressives. This realignment led to the split of the Republican Party, which saw its former leader and ex-president, Theodore Roosevelt,  running again for the presidency as the leader of a third party, the Progressive or  Bull Moose Party, in the elections of 1912. In fact, these elections verified the pervasiveness of Progressivism: Both Roosevelt’s new founded party and the Democratic Party, under Woodrow Wilson, entered the arena with a progressive platform while the conservatives, gathered around the Republican president William Taft, had also adopted parts of the reform agenda: Taft himself was an active trust-buster during his presidency. The result of the elections saw a Democratic president, Woodrow Wilson, implementing many of the reforms that the Republican rebels had passionately fought for.

Wolraich brilliantly recounts the transformation of Roosevelt from a moderate reformer president to a radical progressive agitator and the conflicts between the Progressives, gathered around La Follette, and the conservatives in Congress. Impressive figures of a long gone America come back to life: Joseph Cannon, the imperial Speaker of the House of Representatives, chewing his cigar while battling the reformers who tried to strip him of his excessive powers, conservative senator Nelson Aldrich, who became the unexpected father of the Federal Reserve and Robert La Follette, the definite hero of the book, fighting stubbornly against an initially hostile political environment in order to implement his innovative ideas.

Of course, this crucial period of American history has been extensively studied before. Readers who wish to read a rigid scholarly account of the era have to go back to the work of historians such as Lewis L. Gould, Sidney M. Milkis, Richard Hofstadter and Robert Wiebe. In this respect, academic experts may argue that the vast literature on Progressivism makes hard for Wolraich to break new ground with his study. Moreover, they could argue that some discussion on the populist movement that preceded Progressivism and on the latter’s influence on the New Deal would have placed Wolraich’s story in a wider context. Yet, this is not a rigidly academic work. The purposes of the author are different and he wishes for a broader audience. Judging on the basis of what he seeks to accomplish, the outcome is rather welcome.

Firstly, Unreasonable Men convincingly shows the relevance of the Progressive Era. Everyone interested in present day American politics has much to learn by returning to the times of Roosevelt and La Follette. President Obama’s efforts to promote healthcare and immigration reform can be seen as a continuation of this century old age of reform. Moreover, Wolraich’s account of Robert La Follette offers important lessons for modern politics. Especially his argument that “to build momentum, it is often necessary to lose in order to win,” Fighting Bob’s practice par excellence, may be helpful for many modern progressives who received with disappointment the results of the recent mid-term elections. Finally, Unreasonable Men should attract a broader audience than just American history enthusiasts. All those readers who made Thomas Piketty’s wonderful book on inequality a best seller will find the story of Progressivism fascinating. Many of the problems that Progressives fought against are still here and their nature is transnational. In this respect, Wolraich’s book is exceptionally modern and its message global.

Last but not least, Wolraich deserves praise for his writing. It is lively, passionate and cinematic in the way it presents the events that changed America –the book almost reads like a political thriller. One may wonder what a Spielberg, who transformed Doris Kearns Goodwin’s book on Lincoln into a wonderful film, could do with this material, which includes the same level of intrigue, passion and exuberant, larger-than-life personalities.

Michail Zontos holds a BA in International and European Studies (University of Piraeus), an MA in International Relations and Strategic Studies (Panteion University) and an MA in American Studies (Utrecht University). He is currently a PhD candidate at Utrecht University. His dissertation focuses on perceptions of Europe in the work of American historians Frederick Jackson Turner and Charles Austin Beard. He studied in the Netherlands as a scholar of the State Scholarships Foundation of Greece. 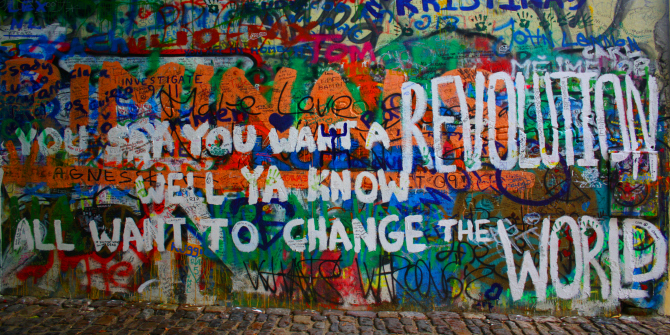