Book Review: Enemy of the State by Tommy Robinson

Book Review: Enemy of the State by Tommy Robinson

This autobiography by Tommy Robinson, Enemy of the State, is a seriously flawed book in many respects, not least in its handling of the topic of Islam, writes Daniel Falkiner. Nevertheless, the book constitutes a primary resource on one influential strand of working-class street politics and raises curious, if disconcerting, questions about how the ethnicity known as ‘White British’ may be fracturing into more unstable elements.

If you are interested in the topics explored in this review, it may be read as a companion piece with James Beresford‘s review of Angry White People: Coming Face-to-Face with the British Far Right, in which the investigative journalist Hsiao-Hung Pai documents conversations and encounters with members of the English Defence League (EDL) as well as Luton residents, anti-racist activists and Muslim communities affected by the EDL’s rise.

Enemy of the State. Tommy Robinson. The Press News Ltd. 2016. 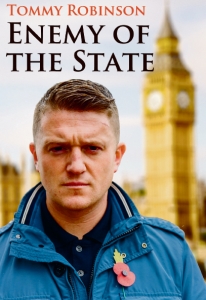 In his newly released autobiography, Enemy of the State, Tommy Robinson openly admits that he and the organisation he once led are ‘not everyone’s cup of tea’. But he also argues that, despite having publicly renounced the English Defence League (EDL), he is yet to receive a fair public hearing. Anybody with a connection to the EDL, he writes, is still portrayed by mainstream politicians and the media ‘as though they eat, breathe and live some kind of all-consuming hatred’. Robinson protests that this is not at all what he or the vast majority of his supporters stand for.

Many will have their doubts about this. As it is, however, one need not agree with Robinson to find reason to read his book. In fact, anybody concerned about the cohesion of British society should read Enemy of the State very carefully. This is not because it offers a particularly incisive analysis of Islam in Britain — it doesn’t. The book’s value lies instead in the insight it provides into how one small demonstration against Islamic extremism in Luton could morph into a nationwide anti-Islam movement. Perhaps more significantly, it also provides an intimate (if sometimes myopic) portrait of the social backdrop against which this movement and the beliefs that guide it must be understood.

That portrait is bleak indeed. Economic vulnerability, social breakdown and political neglect are themes that surface time and again. Importantly, the drug abuse, crime and serious violence that frequently accompany these broader problems are never abstract for Robinson; they are lived realities for him and for his broader community. And he is not shy of describing them in disturbing detail, because ‘these things are bound to have shaped me in some way, growing up. Hearing the stories and experiencing the reality of life on [the] streets … [you] couldn’t help but have it touch your life in some way or another.’

Most notable in this regard is the growth of gangs in Luton over the past few decades and the violence they have brought with them. The brutal murder of Mark Sharp in 1995 seemed to make a particularly deep impression on the community, and on Robinson himself. ‘The truth is’, he writes, ‘that by the time the conflict became focused on religion and nationalism, there had been trouble brewing in Luton for many years. That was more about gang territory and activity than any disputes over faith.’ 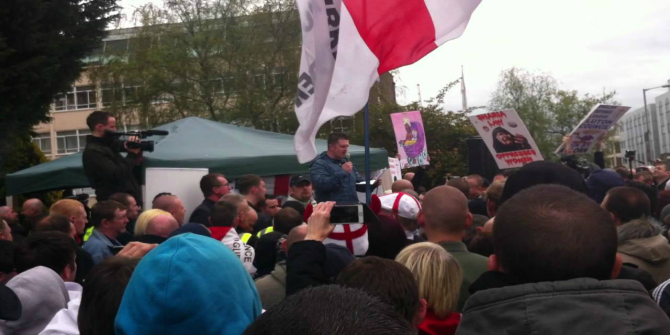 Researchers have corroborated this assertion, and few among them would dispute Robinson’s claim that gangs in Luton had consolidated along ethnic and religious divides in the community well before the EDL emerged. Where scholars will take serious issue with Robinson’s narrative, however, is in the significance he attaches to Muslim identity as a contributing factor to the various social ills to which he bears witness. For example, contrary to Robinson’s claims, Islam does not necessarily have any bearing on a Muslim gang member’s behaviour, even if all the other members of the gang also identify as Muslim. To suggest otherwise would require us to believe that the Christian faith of the Catholics who make up the Sicilian Mafia inherently influences their behaviour, which is clearly not the case.

Concerning the different standards often applied by authorities to different communities on the basis of their identities, however, Robinson’s arguments stand on more solid ground. Most convincing in this respect are his complaints about the failures that led to the Rotherham child sexual exploitation scandal, in which it was revealed that gangs of mainly Pakistani-heritage men had sexually abused some 1,400 young girls under the noses of local authorities for more than 15 years. The question of whether cultural factors were involved in these crimes is contested, but what now seems beyond doubt is that senior police and government officials prioritised good relations with the Pakistani-heritage community over the safety and well-being of very vulnerable, predominantly White British children, whose pleas for help were often ignored or dismissed with barely veiled contempt.

Robinson also notes that police kettled protestors for three hours at one of the very first demonstrations he organised. During this time, a number of women (including his aunt) were humiliated by having to crouch and urinate in the street. This occurred in spite of the women having pleaded with police to be let out to use the toilet. The rhetorical question Robinson poses regarding this event is a potent one: ‘Could you imagine the police doing that to Muslim women?’ And it is indeed very difficult to imagine British police forcing traditional Muslim women to choose between wetting themselves or exposing themselves in front of strangers. But differential treatment rarely sits well with those given the short end of the stick as criticism of the perceived unfairness of the UK government’s Prevent program also demonstrates. In fact, Robinson states that his perceived experience of policing double standards was effectively what led him and his friends to create the EDL.

This leads to an important point. Much of Robinson’s ire seems to ultimately derive from his feeling of have been denied a voice, of having been treated like ‘a second class citizen in his own town and his own country’. That this anger is shared by so many people (as the explosive growth of the EDL demonstrates) is deeply troubling, and it cannot be simply dismissed. Indeed, it seems to be at least in part a reaction to what Colin Webster has called the racialisation of the white working class. As Robinson puts it: ‘Lads like me march and we’re thugs. Middle-class tweedies march and the nation is speaking.’

Enemy of the State is a seriously flawed book in many respects, not least in its handling of the topic of Islam. Nevertheless, it is genuinely important: it constitutes a valuable primary resource on the development of one influential strand of working-class street politics, and provides some answers as to how this kind of politics might develop in the future. Consciously or not, it also raises curious if rather disconcerting questions about how the ethnicity known as ‘White British’ may be fracturing into more unstable elements. Whatever one thinks of its author, this book should be on the reading list of anyone who is concerned about social cohesion in Britain, or simply committed to rerum cognoscere causas.