In Ice Bear: The Cultural History of an Arctic Icon, Michael Engelhard takes readers on an encyclopaedic journey through time and space to explore the iconic positioning of the polar bear as food, enemy, spirit guide, monster, trade good and symbol of environmental crisis, amongst others. This is a beautifully illustrated and carefully curated book, offering comprehensive and fascinating insight into this quintessential animal ‘Other’, writes Lauriane Suyin Chalmin-Pui. 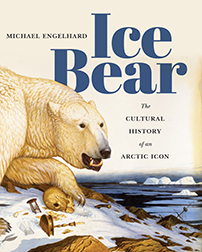 A beautiful example of a book that you might want to read in public, Ice Bear: The Cultural History of an Arctic Icon takes readers on an encyclopaedic journey through time and space in the footsteps of the polar bear. Immediately, the cover impresses – a timeless colour scheme and Walton Ford’s monumental painting will catch the eyes of those around you. If your fellow commuters are so intrigued by the book in your hands that they later seek it out, they won’t be disappointed. Michael Engelhard, writer and wilderness guide, seamlessly weaves together his two passions to produce a comprehensive account of the many relationships between humans and polar bears.

A connection to polar bears that few people can claim, Engelhard lives in Alaska and therefore has unique proximity to an animal that readers will rapidly learn to appreciate. Taking in history, art, politics, activism, geography, popular culture and literature, Engelhard has a strong command of his statuesque research subject. Faced with such a sprawling analytical challenge, Engelhard’s goal is to examine attitudes towards, interactions with, and beliefs held about, polar bears. He places the book squarely in the emergent field of anthrozoology to investigate cultural rather than biological relations with this animal ‘Other’. Indeed, the polar bear is seen in a seemingly never-ending list of ways: food, pet, trophy, status symbol, commodity, monster, spirit animal, circus act, zoo superstar and political cause célèbre (7).

I began my acquaintance with Ice Bear by simply flipping through the glossy pages, and found myself pulled into almost every single one. The carefully curated illustrations, photographs, paintings, graphics and posters evoke the diverse relationships we have with polar bears. The visuals set this book apart from most. Rather than simply offering one author’s work, it is more akin to a polar bear museum. Each image tells a powerful story – some of them familiar, others outlandish, but all portraying a real animal of mythical proportions. For example, John Macallen Swan’s 1903 sketch enchantingly captures the luxury that polar bears can afford themselves: exposing a rare vulnerability by napping out in the open, knowing that they have no natural predators but humans (9). The accompanying captions give the necessary explanations and evidence the ubiquity and established presence of polar bears in both northern and global culture. 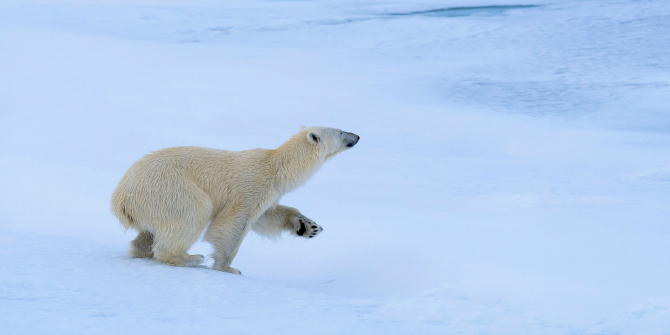 Having said this, limiting yourself to the captions would mean that you fail to embark on Engelhard’s literary and thrillingly human adventure. Ice Bear follows a loosely chronological structure, through Norse culture, medieval Europe, Elizabethan England and the age of enlightenment and exploration. There are then thematic treatments of circuses and zoos, indigenous relationships with polar bears as well as trophy hunting, global trade and political activism in a changing climate.

Setting the scene for ‘The Transformative Bear’, the ninth chapter on non-Western understandings of the world strongly intertwined with polar bears, the book’s introduction demonstrates an eclectic mix of supposed similarities between polar bears and humans. This is a well-known starting point for challenging Cartesian views of the world. The latter preclude the permeable boundaries between human and other-than-human that pervade Native cosmologies. The chapter in question is therefore crucial (and in my view, the most important) for discussion of our relationships with polar bears. Prefaced by anthropologist Edmund Carpenter’s description of the reciprocity between an Inuit carver and a piece of unworked ivory, Engelhard concisely presents the unique role polar bears play in bridging spirit and human worlds.

While Ice Bear opens with a map of the Arctic delineated with the range of the polar bear, ecology certainly does not limit the geographical extent of the book. In effect, the polar bear is a cultural icon the world over – from the World Wildlife Fund’s (WWF) installation in Sydney to controversially lewd German Art Nouveau paintings and to globally recognisable commercial campaigns. Engelhard dedicates an entire chapter to Knut, the polar bear born in Berlin Zoo in 2006 who quickly became a media sensation. Six years after his death, Knut still enjoys an enduring legacy as the world’s most famous polar bear. For those who do not understand the importance of the history of the icon, Engelhard explains that it ‘illuminates our troubled and troubling relations with nature’ (19).

To fully grasp Engelhard’s writing, I would nonetheless recommend at least some basic knowledge of the human geographies and politics of the Arctic. While it is a tall order to expect an introduction to the northern region in a book with such a volume of polar bear material to grapple with, clearer ethnographies would have been beneficial for readers from different backgrounds. For a region so often depicted by a couple of polar bears roaming about, this is perhaps a missed opportunity to familiarise readers with the political and historical realities of the Arctic’s eight countries and over 40 different ethnic groups. Similarly, a second aspect I missed is stronger inclusion and more evocative description of Arctic landscapes. Admittedly, the book is not set in the Arctic per se but many ‘scenes’ are, and for most of us it can be hard to imagine the spatiality of the region.

At the end of this whirlwind tour of the cultural history of the polar bear, I now have a newfound fascination for the species but also for the people who live with, depict and study them. Michael Engelhard writes confidently of the physical and metaphysical realms as well as our projections of human fears, fantasies and ambitions onto this quintessential Other. 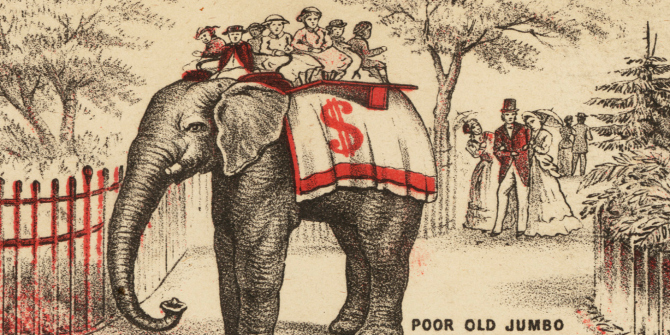