In Re:development: Voices, Cyanotypes and Writings from the Green Backyard, editor and artist Jessie Brennan brings together a range of contributors to reflect on a grassroots communal growing project in Peterborough, ‘The Green Backyard’. Including the voices of those involved in the development of the site, this beautifully presented volume offers materially grounded insight into the importance of communal urban green spaces, writes Helen Traill. 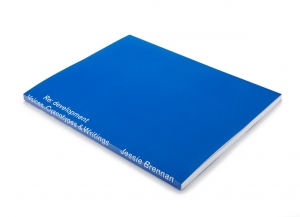 ‘If this were to be lost’ is a phrase that echoes through Re:development: Voices, Cyantotypes and Writings from the Green Backyard. Reflecting on a grassroots communal growing project in Peterborough called the ‘Green Backyard’, editor and artist Jessie Brennan has produced a monument to what such endeavours can offer. In this vein, Re:development is a deliberate rejection of economic rationality as an alibi for destroying communal projects.

Vaunting the ‘Green Backyard’ as a site of value, the book reflects this place where people come together to grow and share that lies on an abandoned allotment site that was left fallow until locals rejuvenated it in 2009. As the co-founder of the Green Backyard, Sophie Antonelli, writes: ‘we, like so many other community groups and spaces, grow people first and plants second’ (32) – a theme which will chime with anyone who has spent time in similar spaces. Focusing on the potential of urban growing projects, Re:development engages polemically and personally with urban development debates around value. As such, the reader should not expect reflections on the partiality of community or lengthy debate over the potential co-option of projects to governance agendas (for this, see good discussions from Mary Beth Pudup and Marit Rosol). It does, however, introduce and reflect on the many debates that emerge from communal growing spaces.

Re:development consists of three elements: a selection of cyanotypes taken of objects in the project; selected voices transcribed from over 100 oral recordings with participants in the Green Backyard; and eleven short writings on the space. The first two writings are an introduction from Brennan and a piece by Antonelli. The remaining nine essays cover a wide range of disciplines, but all respond to the space and to Brennan’s artworks. The essays relate the Green Backyard to a variety of thinkers and themes, from Henri Lefebvre’s Right to the City to the materiality of human waste. This breadth represents not only the multifaceted nature of spaces like the Green Backyard, but also the broad range of interest in urban communal growing. As essays on land value, environmental justice and bottom-up history attest, urban communal green spaces raise fundamental questions about the way we live, questions that have given rise to an explosion of interest in communal growing since the 1990s. 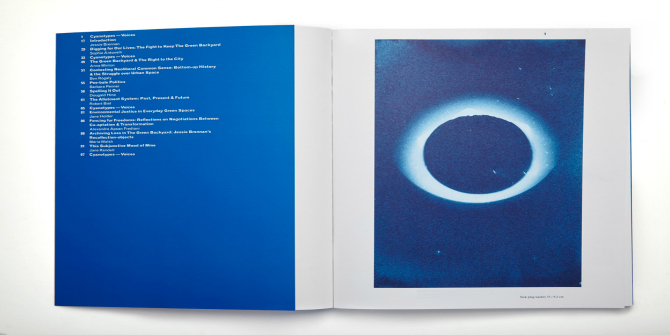 What Re:development does well is materialise the Green Backyard in its everyday glory. Especially through the accounts (the ‘voices’) and the cyanotypes, a sense of the site’s physicality emerges. Collective practices like holding barbeques are recalled through mentions of the pizza oven and open fires, and a toothbrush emotively evokes the collection of supplies on site for refugees in Calais. The material life of the site is closely tied to the emotional lives present in the voices that speak from the page. They recall social connection and spaces for children to learn and grow. Rarely does one find raw empirical material curated in this way, and largely left to speak for itself. This subversion of the social scientific norm is exciting in allowing people from the Green Backyard to speak to the reader without analytical interpretation.

The accounts sit literally between the cyanotypes, within pages that are closed at the top. The reader has to peer into the inside of the book, forcing the pages to take up space. The reader cannot help but reflect on the position that Brennan puts them in here. The ‘voices’ are less privileged within the pages of the book than the ‘writings’. Representing their voices in these folds emphasises their marginality: it echoes their position as parties fighting to be listened to in a land-use dispute. However, an opportunity has perhaps been missed for Brennan to explain and reflect on this choice. This might have particularly elucidated the curatorial and design decisions taken to produce the book in this specific fashion.

The essays cover more familiar ground to the academic reader, presenting responses from contributors across an array of disciplines to Brennan’s work and the Green Backyard. These are relatively informal, some hopeful, threaded with personal, reflexive notes, such as geographer Ben Rogaly’s reflections on Doreen Massey’s intention to visit the site, which tragically never occurred. 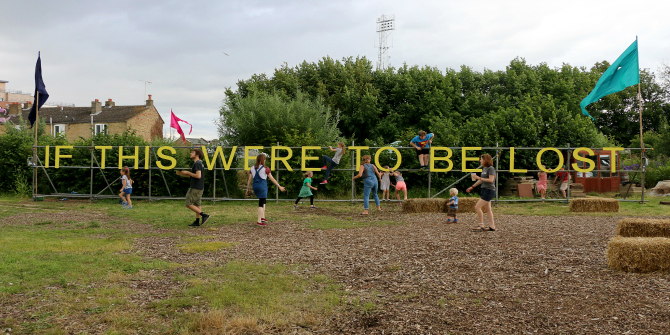 Within the collection, Jane Rendell’s essay contribution stands out as exemplary. Provoked by the words from Brennan’s in situ artwork, ‘if this were to be lost’, Rendell ruminates on loss. Her short essay compares the potential demolition of the Green Backyard to the disappearance of other things she cares for: council estates in London, the public university and the public pool, amongst other things. In closing her piece, she argues for the inversion of Brennan’s phrase to: ‘if this were not to be lost’. She argues for the emancipatory potential of focusing on what does exist, and what possibilities might be found in sites like the Green Backyard. Through this, Rendell aptly sums up the rhetorical position of the whole book.

What was peculiar in Rendell’s account, as in Anna Minton’s, was the main urban referent being London, not Peterborough, although all the writers do make clear connections between the two. London’s trajectory offers a strong exemplar of dispossession and urban change but, as Brennan’s own participants note, the specific site of the project matters: communal growing projects are rooted in, and productive of, places. While Rogaly’s contribution is helpfully grounded in Peterborough, paying close attention to biography and space, the collection as a whole could have benefitted from more discussion of Peterborough’s development and the Green Backyard’s place within it. This is especially important when one talks about neoliberalisation processes (as Rogaly does). As Jamie Peck and Adam Tickell have elsewhere argued, these processes occur differently in different places, sharing ‘family resemblances’ rather than offering a clearly reproduced pattern.

Nonetheless, read as speaking with rather than speaking for the growers at the Green Backyard, Re:development offers a beautiful, materially grounded representation that feels appropriate to the level of emotional connection communal green spaces arouse. The book is thus a solid argument for the importance of communal urban green spaces across many disciplines, and a physically attractive reminder of the materiality of urban growing as a practice.

Helen Traill is a PhD student in the Sociology department at the LSE. Her thesis explores practices of community in community gardens and urban green spaces, and the relationship they have with wider urban social processes. She is particularly interested in urban commons and land ownership, and the political potential of communal practices. She tweets @traillhelen. Read more by Helen Traill.

Note: This review gives the views of the author, and not the position of the LSE Review of Books blog, or of the London School of Economics. Images are provided courtesy of Jessie Brennan and should not be reproduced without the permission of the copyright holder.