In International Express: New Yorkers on the 7 Train, Stéphane Tonnelat and William Kornblum take readers on an underground study of how experiences of the 7 train – part of the iconic New York subway system – shape residents of the city. The frequently captivating insights in this sociological account invite us to question and alter the complex social dimensions of transportation networks that we negotiate daily, writes Jeff Roquen. 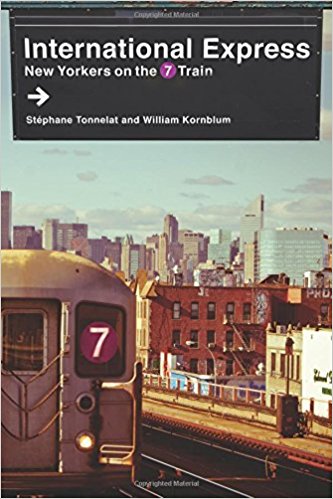 Upon emerging from the Times Square subway station at 42nd Street and 7th Avenue, first-time visitors to New York City enter both the heart of a quintessential US city and one of the most celebrated cosmopolitan crossroads of the international community. After only a few steps on the sidewalk, Midtown Manhattan greets everyone equally with the sights and sounds of traffic jams, clustered pedestrian crossings, a dazzling array of neon signs and approximately 800 languages and dialects spoken by the urban masses. Indeed, the corner of 42nd and 7th contains the global contours of the human experience – hope and despair, consumption and confusion, love and loss.

In International Express: New Yorkers on the 7 Train, ethnographer Stéphane Tonnelat and sociologist William Kornblum invite readers on an underground journey to examine the social constitution of both long-time residents and recent immigrants through their experience of the iconic NYC subway system, synthesising history, quantitative data and ‘walking interviews’ with high school students.  By the end of this intellectual ride, the authors ultimately succeed in identifying and evaluating how the time, space and perceptions of the subway interrupt and define multitudes of city-dwellers in the ‘Big Apple’.

As the 7 Train whisks nearly half a million people from Flushing-Main Street Station to their respective destinations daily, running nineteen miles through diverse neighbourhoods until the final stop at 34th Street and 11thAvenue, it seemingly offers a perfect subject for a microcosmic analysis of humanity.  Subsequent to the opening chapter, which outlines the parameters of the study, the authors officially jump on the train in Chapter Two, ‘Coping with Diversity Aboard the ‘‘International Express’’’ – a popular moniker for the 7 Train. 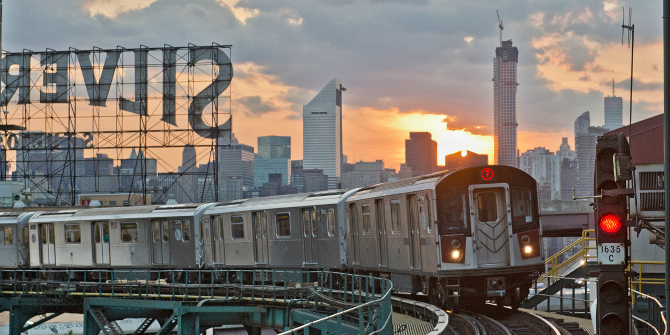 In the wee hours of the morning, commuters from around Queens (one of the five boroughs of New York City) begin arriving at the Flushing-Main Street Station by car, taxi and ‘more than 20 bus lines’ to take the 7 Train (24). ‘Asians’ comprise a plurality of the area population (46 per cent), followed by ‘White non-Hispanics’ (31 per cent), ‘Hispanics or Latinos’ (18.96 per cent) and ‘Black or African Americans’ (3.08 per cent). At the height of rush hour from 8-9am, 8,000 fatigued and frenzied workers converge upon the station for yet another mad dash into Manhattan (26-27).  As a result of the intense overcrowding, a number of riders on the 7 Train have become disaffected by the hyper-competition for seats – including 31-year-old Owen from Taiwan, who expressed his opinion by succinctly stating: ‘People are like monsters’ (27).

From the opening of Chapter Five, ‘Trust in the Subway’, through Chapter Six, ‘Gender Relations on the Subway’, to the end of Chapter Seven, ‘Teenagers on the 7 Train’, Tonnelat and Kornblum utilise their research and assembled interviews to hone in on the foremost (and unspoken) criterion of ridership as concisely expressed in the diary of a student: ‘Rule #1: You don’t step on my turf, I don’t step on your turf’ (175).  Beyond mere spatial requirements, the quest to attain ‘defendable territory’ also involves psychological considerations.  As soon as the train doors open, passengers quickly calculate the best sitting or standing options available to ward off invasions of their personal space. In American parlance, riders seek ‘elbow room’ and a degree of shelter.  While some abhor the rigours of their commutes, others embrace the subway regardless of suffering even greater hardships.  For example, Aisha, a quick-witted South Asian high school student, relayed a story about her mother, who ‘covers herself completely’ in her daily dress, being told: ‘Go back to your own country […] You terrorists!’  Nevertheless, Aisha states that, despite such pejorative comments, her mother still rides and ‘enjoys’ the 7 Train (36-37).

The most incisive and captivating section of the book can perhaps be located in Chapter Four, ‘The 74th Street/Roosevelt Avenue Station’. Seven stops beyond Flushing-Main Street with connections to four other trains and the Q70 bus to LaGuardia Airport, an elaborate network of small businesses and entrepreneurs operate in the environs of 74th Street/Roosevelt Avenue to serve both riders and the larger neighbourhood.  Each day before dawn, Irene, a highly energetic Egyptian woman, transports her cart to the station and jockeys for position in competition with other street vendors.  As she pours aromatic cups of coffee, one of the most traded commodities in the world, she offers customers a warm welcome and an early morning chat.  Irene enjoys the freedom of being self-employed and ‘dreams of the day when she could expand her business’ (74). Similarly, Oscar, who entered the US from Mexico more than two decades ago, toiled in a delicatessen for several years to earn enough money to become an independent owner of a kebab stand at the station. In a sense, Irene and Oscar exemplify a widely-accepted interpretation of the American dream – whereby anyone from any corner of the world can thrive in society through honesty, hard work and respect for others.

Yet, the 74th Street/Roosevelt Avenue Station remains far from the American ideal as espoused by Thomas Jefferson (1743-1826) in the Declaration of Independence (1776) that ‘all men are created equal’. As explored by the authors, men, especially males from minority populations, often receive undue attention from the authorities and sometimes fall victim to racial profiling and/or disproportionate punishments for petty crimes.  According to data from 2008-09, males constituted 93 per cent of the station commuters stopped by the New York Police Department or officers of the Transit Bureau, of which ‘95 percent of the cases resulted in neither an arrest nor a summons’. For those stopped, tried and convicted of fare evasion, however, ‘black and Hispanic men made up the vast majority […] sentenced to jail time’ (91-92). Once on the train, many black riders also reported a silent yet palpable form of discrimination from passengers who purposely refuse to sit in their vicinity due to long-discredited stereotypes (128).

For women, the 7 Train and the NYC subway can also present daunting challenges in guarding against the unwanted advancements of male riders. If improperly touched or flagrantly groped, women respond in one of four manners: 1) remaining ‘silent and passive’; 2) ‘covert action’ (i.e. stepping on the foot or kicking the assailant); 3) ‘direct confrontation’ (upbraiding the harasser face-to-face); and 4) ‘talking out loud’ (pointing to the perpetrator and launching into a verbal summary of his behaviour to the other riders) (157-65).  By printing the testimonies of the victims of harassment in long, block quotes, the authors allow their voices to vividly portray the psychological trauma of being sexually assaulted, which often begins with surprise, shock and denial, and moves toward humiliation, frustration and anger.  Rather than returning to gender-segregated rush-hour trains to protect women – a short-lived experiment for commuters from Jersey City to Manhattan in 1909 – a dialogue between city officials and grassroots activists will be necessary to deconstruct the situational dynamics of ‘gendered encounters’ in order to create efficacious, public policy-based deterrents and responses to these assaults.

The penultimate and final chapters, ‘Subway City’ (Chapter Eight) and ‘A World of Subway Citizens’ (Chapter Nine), present a brief chronicle of the NYC subway and an update on the development and expansion of subway systems around the globe, as led by China and India.  Ultimately, International Express: New Yorkers on the 7 Train proves relevant in its findings not only to New York City but also to other metropolitan areas. It essentially calls on each and every train passenger to take an active role in questioning, negotiating and altering the complex social dimensions of their transportation networks in order to ensure the safety, personal security and well-being of others.  In doing so, we become more than citizens of our communities.  We become citizens of the world, and all of us – whether we hail from Bogotá or Birmingham, Jeddah or Johannesburg, Tel Aviv or Tokyo, or somewhere in-between – must get on that train.