In International Law’s Objects, Jessie Hohmann and Daniel Joyce bring together a range of contributors to explore different objects that relate to international law, using these to bring the discipline to life as dynamic and indeterminate rather than stale and rigid. This is one of the most interesting and innovative international law books of recent years, writes Ignas Kalpokas, and will inspire a reconsideration of our preconceptions about the discipline of international law and what it ought to be. 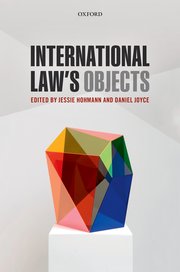 For those who have had to teach or study it, international law does not necessarily scream ‘new’, ‘unexpected’, ‘refreshing’ or ‘exciting’. Instead, it often has a reputation for being a relatively stale and conservative discipline. And yet, the volume that Jessie Hohmann and Daniel Joyce have put together demonstrates that innovation can come even from unlikely places. This is certainly the most interesting and innovative international law book to have come out in recent years – and might just as well prove to be the most important one. This significance stems from at least two notable aspects: the method of presentation and the underlying theoretical assumptions.

Content-wise the contributing authors have decided to focus not on detailed expositions and explications of different branches of law but on different objects that relate to the discipline in some way. The objects themselves range from the relatively self-evident – such as the African Court of Human and People’s Rights or a postcard from the International Criminal Tribunal for the former Yugoslavia (ICTY) – to the symbolic – for example, the chapters ‘Passport’ or ‘Boots (on the Ground)’ – to those necessitating some prior familiarity with the discipline –‘Barcelona Traction Share’ – to the highly cryptic, such as ‘Mosul Four and Iran Six’ (Kuwaiti aircraft seized by Iraq) or, even more confusingly, ‘NM 68226 84912; TQ 30052 80597’ (ordinance survey references to two monuments).

All of these contributions nevertheless share the same basic trait: the object in the title is allowed to speak for itself, revealing not only the applicable law but also the contradictions and aporias that make it exceptional. Indeed, whereas most international law books are primarily concerned with presenting a seemingly natural and self-evident authoritative picture of the law, the objects in this volume tell a different story. Theirs is a story where things did not necessarily have to be the way they turned out, but happened instead due to a coincidence or a certain political constellation. International law is, therefore, quite literally brought to life, showing it to be always dynamic and indeterminate instead of the stale and rigid norms that characterise mainstream discourse. And that is not a mean contribution in itself.

On the theory side, the ‘programmatic’ first chapters by the editors and some of their collaborators make it immediately clear that the focus on objects, instead of great debates, arguments or a systematic exposition of law, is neither accidental nor mere whim of imagination. Instead, there is a firm grounding, first and foremost, in actor network theory and the work of seminal authors like Bruno Latour. In other words, there is severe questioning of the dominant anthropocentric understanding of human sense-making agency. Instead, things, or objects, are seen as agents and sense-makers in their own right. In a related strand, new materialist thinking, speculative realism and object-oriented ontology (OOO) are all quoted by the editors as revealing ‘the fluid boundaries between the subject and the object, focus[ing] our attention on the entanglements that characterise all being in the universe, and break[ing] down the supposed mind/matter binary long characterizing Western thought’ (10). Hence, the volume is no less than an attempt to initiate an entirely new way of looking at international law and to bring in an entirely new take on agency.

Moreover, the book is not only about seeing and perceiving differently; it is also about teaching and learning. As Joyce stresses in his theoretical contribution:

There is also an important pedagogical thread to this approach with work on objects offering teachers of international law new methods and ways of approaching the history of the subject and bringing it into the classroom via the object and its associated narratives and interpretation (24).

The message there is absolutely clear and extremely pertinent to the times: the students of today need something palpable, experiential and stimulating to remain engaged. Long and winding explanation of rules, norms and regulations simply cannot compete with social media, messaging apps, games and so on. Hence, the objects of international law can give the discipline an uncharacteristic tangibility and liveliness.

Moreover, also pertinent to pedagogy, objects themselves are not classified by themes or by branches of law but are instead sorted alphabetically, ‘leaving it for the reader to dip in and out of the collection and to draw the various threads together […] to recognise the agency of the objects themselves, but also the creative agency of the reader’ (27). That is no less a challenge to presenting international law than the focus on objects: while most authors strive for coherence, order and clear-cut definitions, here creativity is key (see also Wouter Werner, 68-69). And it is not accidental that the issue of agency returns once again: the book is decidedly interactive, one where the reader, the objects and the law meet and intermingle in various ways, perhaps unique to every reading situation. The only agency that is (again, consciously) missing is that of some obscure authority figure.

Another important and engaging feature of the book is that it is a collection of personal stories, rather than impassionate and impersonal experts writing about objectively necessary truths. The book’s approach gives a personal touch to international law, revealing the exciting, moving or tragic aspects and underpinnings of the discipline as well as an off-the-cuff glance at the people behind some widely read contributions to the field.

No less importantly, this book also cultivates a certain degree of self-reflexiveness. Many students (and sometimes even experts) mention the objects, refer to the objects (as, for example, case titles) or use terms pertaining to the objects presented in this volume without giving a second thought to the objects themselves or even really understanding what they are. For example, how often do we otherwise pause to consider what really happened with the Barcelona Traction Company, what actually goes into CO2 emissions trading schemes or what being a Somali pirate really entails? Hence, the book teaches us a certain humility to go back to details instead of being carried away by grand narratives. Perhaps the latter is also a need dictated by the times. As Joyce states: ‘In the digital age, the materiality of objects can help to ground us in the face of constant change and the flows of information over and around us’, anchoring us ‘in a confusing sea of competing interpretations’ (27). Hence, instead of scattering and disorganisation, an emphasis on objects might give us reassurance.

Overall, International Law’s Objects is a book that necessitates a reconsideration of our preconceptions about the discipline of international law and what it ought to be. But should we manage to approach it with an open mind, it becomes evident that this book can offer a perspective much more attuned to the present. Moreover, because of its novel method of presentation and the accessible language used, this volume is capable of expanding the readership of international law beyond its relatively narrow academic confines.