In The Populist Radical Left in Europe, editors Giorgios Katsambekis and Alexandros Kioupkiolis bring together contributors to explore populist radical left movements across Europe, discussing examples including Greece’s Syriza, Spain’s Podemos, Slovenia’s Left Party, France’s France Insoumise and Jeremy Corbyn’s Labour, among others. This is an engaging and engaged work of political science, writes Anton Jäger, that provides a necessary moment of reflection on what left populism means, stands for and aims to achieve. 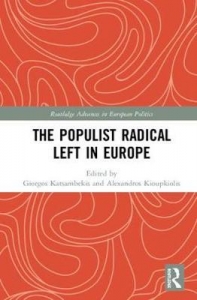 What do we talk about when we talk about ‘left populism’? Like so many issues looming over today’s populism debate, answering the question is as tricky as it is compulsive. Political scientists are certainly not the only ones who’ve tried it. Journalists, bloggers and activists have also been eager participants in a campaign of semantic warfare. In 2015, for instance, the Belgian politician Peter Mertens was asked for thoughts on the accusations of ‘left-wing populism’ hurled at him by opponents. ‘If being for the people is populism’, he replied, ‘I’ll proudly proclaim my populism’.

So what does ‘left populism’ really stand for? In an edited collection called The Populist Radical Left in Europe, Giorgios Katsambekis and Alexandros Kioupkiolis offer a welcome corrective to Mertens’s indeterminacy. Both scholars are renowned for their combination of theoretical and empirical work on populism, focusing mainly on the European periphery and its left populists. As usual, the Argentinian theorist Ernesto Laclau remains an abiding presence in these debates. Instead of seeing populism as a sign of a system failure, Laclau cast the ‘populist moment’ as genetically inscribed into every form of politics. In the 2010s, Laclau’s writings also served as a cookbook for radicals who wanted to manufacture their own version of ‘the people’. The results of this prescription were borne out in the last decade, with left-populist formations vying for power in countries such as Spain, the Netherlands, Germany, Belgium and Greece, some explicitly taking their cue from Laclau and his previous compagnon de route Chantal Mouffe.

The Populist Radical Left offers a balance sheet of these experiments. Katsambekis and Kioupkiolis’s book is more about the left than about populism, as its editors admit from the outset: the choice is for the ‘populist radical left’ instead of ‘radical left populism’. This is also clear in the range of cases surveyed. We get chapters on Greece’s Syriza, Spain’s Podemos, Slovenia’s Left Party, France’s France Insoumise and its leader Jean-Luc Mélenchon, the Dutch Socialist Party (SP), the German Die Linke and Jeremy Corbyn’s Labour, before closing with two theoretical tracts.

A lot of ground is covered in the meantime, but not excessively so: the volume is tied together by a set of clear organising principles (Laclau’s own reflections on populism overall, and a lot of history) to which the contributing authors formulate responses. Alen Toplisek takes on the career of the Slovenian Left Party; Philippe Marlière handles the recent populist conversion of Mélenchon. Paul Lucardie and Gerrit Voerman offer a useful crash course on the Dutch SP, which started as a Maoist outfit in the 1970s and gradually became a potent player in opposition. Dan Hough and Dan Keith then cover Die Linke, while Bice Maiguashca and Jonathan Dean test an arsenal of populism theories through the example of Corbyn’s Labour. Kioupkiolis and Yannis Stavrakakis wrap up the whole volume with two masterful critiques of mainstream populism studies. Beholden to liberal complacency, they claim, most populism scholars have become court epistemologists for contemporary liberalism, offering a form of consultancy that seeks to defend the status quo.

A refusal to submit to mainstream habits is also visible in other parts of the book. Most of all, Katsambekis and Kioupkiolis’s volume offers welcome pushback against the most prevalent definition of populism in the contemporary literature – the so-called ‘ideational’ one first coined by Cas Mudde in 2004. This definition sees populism as a ‘thin ideology’ that divides the population into two opposing camps – ‘the people’ and ‘the elite’. Both camps are here conceived of as essentially homogeneous, while the first is morally superior to the second – the so-called ‘moralism’ criterion. Since 2004, Mudde’s typology has now settled across the discipline and has become the go-to instrument for disciplinary outsiders.

As The Populist Radical Left argues, however, there are some persistent issues with Mudde’s definition. The first is the criterion of ‘moralisation’. Centrist discourse itself is pervaded with moralistic tropes – one could think of Angela Merkel’s resort to the virtues of the Swabian housewife, or the supercilious treatment of the Greek debtors during the eurozone crisis. Katsambekis also shows how the majority of left-populist movements hardly adhere to a ‘homogeneous and unified’ vision of the people, which supposedly drowns the individual into a formless mass. Instead, leaders such as Pablo Iglesias and Alexis Tsipras celebrated the inherent diversity of their ‘people’ – the first through an acceptance of Spain’s ‘plurinational’ set-up and Catalanist demands, the second through attempts to welcome refugees to Greek society.

The authors in the collection also try to retain a healthy distance from the left-populist object and refuse to give in to a ‘therapeutic temptation’. The Populist Radical Left never completely escapes this, however. It is clear that most of the contributors to the volume hold tacit sympathies for the left-populist wave. This sometimes leads them to overvalue the capacity such movements have to actually dislodge contemporary political habits, and to show an occasional blindness to their structural drivers. A recurrent question in populism studies still remains what the exact etiology of populist movements really is – what explains their rise, in short. Economic crises, social crises, political crises, crises of representation all provide fertile ground for populisms to flourish. This claim often leads to a problematic regress, however, in which the conditions for populism are reduced to the question of what constitutes a valid criterion for such a crisis in the first place (what does it mean to be in a crisis? When does one leave a crisis? What state is one to compare to the supposedly ‘abnormal’ situation?). Most left-populist scholars are wary of ‘over-sociologising’ tendencies that reduce their populism to nothing but a side-effect of hidden social trends – whether rising educational levels, economic decline or cultural anomie. Instead they insist on the agency effected in the ‘populist moment’, and how populists (whether left or right) model the ‘people’ they claim to represent.

This still leaves some tricky questions. Most of all, The Populist Radical Left leaves under-explained what occasions populist movements in the first place. All of the chapters make clear that left populism can only function in a time when classical party loyalties have dwindled – something Pierre Rosanvallon has typified as the ‘desociologisation’ of society. Tracking this crisis in more strictly numerical terms (party membership, electoral participation rates), however, would allow populism scholars to flesh out a thicker notion of ‘crisis’. This might also include looking at patterns of state transformation and political economy in the last 30 years. As work by Chris Bickerton and Peter Mair shows, these have a lot to tell populism theorists, and would offer a fuller chronology of ‘how’ the populist moment starts and ends.

This leads us to a second issue. Discourse-theoretical approaches to populism – a school to which the majority of the contributors to this volume are indebted – have always remained vulnerable to an accusation of ‘formalism’, or an underappreciation of the ‘social content’ that drives the populist moment. This is a problem that expresses itself on the level of practice as well. As the 2015 Syriza episode illustrates so painfully, such an excessive focus on rhetoric can only sidetrack a host of questions previously central to any left-wing movement: how to seize and retain power, how to deal with finance, capital flight and resistant firms. On most of these topics, Laclau and Mouffe remained crushingly quiet – and so do many of today’s left populists.

Contributors make clear that left populism could never function as a panacea. Syriza was never supposed to magically reorder the political economy of an entire continent. Nonetheless, a lingering sense of disenchantment and disengagement pervades Katsambekis and Kioupkiolis’s volume. Left populism has not been able to make true on its promises, exemplified by recent electoral setbacks for La France Insoumise, Podemos, Die Linke and the SP. Several factors are at play here. In a certain sense, left populism remained too ‘left’, unable to fully profit from the breakdown of the traditional party system and thus unable to embrace a ‘catch-all’ approach. In another sense however, left populism was too ‘populist’, thinning out its commitments to an older left-wing tradition and skipping over some key organisational questions. In the meantime, the disorganised polity left behind by neoliberalism has produced fresh and even more elusive modes of protest, with which Europe’s left populists seem to have trouble catching up. These range from the gilets jaunes to the Brexit vote and the rise of the Nationalist International. This is now joined by the dogged survival (and, in some cases, full-scale return) of old-style social democracy in Spain and Portugal. However dinosaurian, party politics dies hard.

All of this speaks to the slow closing of the window of opportunity opened up by the post-2008 ‘left populist moment’. This offers a painful but necessary occasion for reflection – about what left populism means, what it does and does not stand for, what it should and what it should not do. As an engaging and engaged work of political science, The Populist Radical Left provides exactly that.

Anton Jäger is a doctoral candidate in history at the University of Cambridge, working on a PhD thesis that examines the political theory of the late nineteenth-century American Populist movement. Articles of his have also appeared in Jacobin, Constellations and the Guardian.