In America in Afghanistan: Foreign Policy and Decision Making from Bush to Obama to Trump, Sharifullah Dorani focuses on the US intervention in Afghanistan and the decision-making processes of the last three American administrations. This is a valuable contribution to understanding the complex motivations, causes and consequences of US policy towards Afghanistan and the internal disagreements between the actors, writes Berkay Gülen. 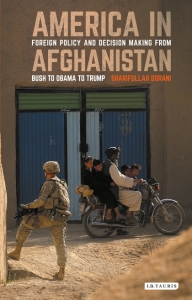 Imagine a country where 54 per cent of its citizens live in poverty and more than 40 per cent are unemployed while warlords, land-grabbers, smugglers and criminals – ‘the syndicate’, as Sharifullah Dorani terms it – run a shadow state and their wealth and influence create an economy worth up to $20 billion. This is not an imaginary country: in America in Afghanistan: Foreign Policy and Decision Making from Bush to Obama to Trump, Dorani discusses the last two decades of Afghanistan’s tumultuous history, including the US intervention, with questions regarding the decision-making system of the last three American administrations.

Dorani’s dissertation-to-book introduces six crucial questions; the study does not directly respond to these but rather uses them to highlight the turning points of the US decision-making towards Afghanistan. These questions include: what the US motives were in Afghanistan; why the US failed to establish a secure nation state in Afghanistan; why the US turned a blind eye to Afghanistan once its policies did not work; why different American administrations did not respond to the Pakistani Army’s support for insurgency in Afghanistan; how Afghanistan stayed stable during the era of King Zahir Shah if it is characteristically unstable; and, finally, why there were inconsistencies in the Afghan policy of the United States from the George W. Bush era to the early months of the Donald Trump administration. In addition, the author reflects on the question that many Afghans who he encountered asked him: how could the world’s most powerful military nation not defeat a few thousand radical Islamists in a few months and stabilise Afghanistan?

In order to examine these questions, Dorani points out the six key decisions of the US administration, which inform the chapters of the book: (1) the Global War on Terror (GWOT) policy; (2) the counter-terrorism strategy of the Bush administration; (3) Barack Obama’s decision to deploy 300,000 additional troops to Afghanistan in late 2009; (4) the withdrawal of all troops by 2014; (5) the delay of the US exit in mid-2016; and (6) the Trump administration’s South Asia Strategy in summer 2017 that included Afghanistan.

In each chapter, the author analyses these decisions by dividing them into four phases: the key players and the conditions at the time of decision (initiation); how and why the decision was made (formulation); what happened after the policy was practised (implementation); and how Congress, the media, experts as well as American and Afghan public opinion reacted to the outcomes of the policy (evaluation).

Image Credit: Crop of ‘Security at Sunset’, U.S. Army photo by Spc. Tia P. Sokimson, licensed by The U.S. Army under CC BY 2.0

Dorani follows these stages for each president and their cabinets by mentioning the competition between state agencies, elected and appointed government workers and ideologies. For instance, before the intervention the war cabinet of Bush aggressively discussed if the US should leave a small footprint through abandoning the goal of nation-building in Afghanistan (Donald Rumsfeld’s doctrine) or whether the administration should deploy a large number of troops to make security the top priority of US interests in the long run (Colin Powell’s doctrine).

Another critical discussion that highlights the positions of decision-makers and divided the war cabinet of Obama is the US Commander in Afghanistan Stanley McChrystal’s request for another 40,000 US troops and Vice President Joe Biden’s advice to Obama not to deploy more forces as US forces on the ground had already achieved the goal of defeating the Taliban; defeating Al Qaeda is a different story since the latter’s network stretches beyond Afghanistan. Nevertheless, Dorani does not emphasise a similar discrepancy in the Trump administration during its first sixteen months; rather, he points out that Trump’s foreign policy agenda sees the US role in the world in a different light, and focuses on American domestic actors as well as Iran, China and North Korea, instead of evaluating original policy options towards Afghanistan.

In the concluding chapter of the book, Dorani states that all three American administrations made decisions based on false assumptions and short-sighted policies: all administrations more or less supported the syndicate although Afghan society saw this as one of the main reasons for disruption in the system. During the early years of the US intervention, the US was looking for a military force that would fight for the American cause and the syndicate became a solid partner in the battle against the Taliban. Once the support of local fighters offered a good excuse to the US to not portray the intervention as ‘occupation’, there was no reason to rely on the fractured Afghan governments that warned their counterparts about the background of syndicate members. Dorani also discusses the American perception that tends to see Afghanistan’s century-long struggle for stabilisation as an obstacle to devoting more US sources to a democratic Afghanistan. The last century of Afghanistan witnessed numerous uprisings backed by foreign countries that knew how to take advantage of the country’s complexities and those interventions made the US believe that Afghanistan was not yet ready to govern by democratic institutions.

In terms of US policies in the region, Dorani points out the inability of the American administrations to stop Pakistan’s insurgency ambitions towards Afghanistan due to the fear that if the US interfere in Pakistan too, and push the Pakistani army too hard to close the Taliban camps on the Pakistan-Afghanistan border, this would destabilise the Pakistani regime while leveraging the Taliban. In that sense, it is stability in Pakistan rather than in Afghanistan that has been vital for US interests in the region.

America in Afghanistan offers a valuable contribution to understanding the motivations of the last three American administrations in Afghanistan and the internal disagreements between the actors. Academic studies of foreign policymaking and decision-making rarely point out the human factor—there are real human beings behind the noted decisions, and their motivations are more complex than models typically discussed in foreign policy analysis (FPA) literature. However, the missing line in Dorani’s analysis is that all those decisions are depicted as the product of internal discussions between state agencies and bureaucrats rather than showing that the decision-makers also interacted with other states, organisations and interest groups. The book rarely mentions the role of US allies in shaping foreign policy positions, such as the United Kingdom and NATO, or the role of domestic factors such as advocacy groups and companies in the US.

All in all, it is not an easy job to break down the complex causes and consequences of the US policy in Afghanistan, but Dorani achieves this goal in the book with in-depth analysis of US decision-making and gives a clear understanding of how American bureaucrats make foreign policy decisions when they feel under pressure.

Berkay Gülen is a PhD candidate in the Henry M. Jackson School of International Studies, University of Washington. Her doctoral research is on the role of bureaucrats in foreign policy making and foreign policy decision-making in Turkey and Israel. She received her MSc degrees from the Middle East Technical University and SOAS, University of London. She tweets at @berkay_gulen