In The Northumbrians: North-East England and its People, Dan Jackson offers a welcome new history of the North East, demonstrating how many aspects of its culture grew out of centuries of border warfare and industry. In showing that the North East was innovative, resourceful and enlightened, as well as dangerous, poverty-stricken and exhausted, this deeply researched book reveals the compelling past of this seemingly peripheral corner of England, writes Tom Draper, whose interview with the author can be read here.

The Northumbrians: North-East England and its People. Dan Jackson. Hurst. 2019. 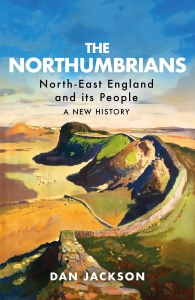 The notion that North-East England has been overlooked, patronised, forgotten and misunderstood runs through Dan Jackson’s The Northumbrians, a welcome examination of the last 2000 years of history in this seemingly peripheral corner of England. What may be seen today as a distant and uneventful region for Jackson deserves not only considerable scholarly interest and attention but popular engagement. This is a book for both historians and the general public and one which succeeds in merging a lifelong fascination and enthusiasm for the people and history of the North East with a scholarly scepticism and reluctance to engage in the exercise of navel-gazing.

Jackson has chosen the ‘Northumbrians’ as his catch-all term for the people of the two historic counties of Northumberland and Durham. This avoids ‘bogging us down in the imprecise demarcation of Geordies and Mackems, the two feuding tribes of Tyne and Wear whose modern rivalry has obscured how much they share in common’ (vii). It also ensures that the rural and middle-class inhabitants of Northumberland and Durham are included – groups traditionally neglected by the urban working-class associations commonly made with ‘Geordie’ – as well as connecting the experience of the present with the deep-rooted and ‘almost unchanging cultural mores that have persisted over centuries’ (vii).

This preoccupation with ‘Northumbria’ has had a long allure in the North East. Jackson stands as a twenty-first-century heir to the ‘New Northumbrians’ of the nineteenth century, a loose movement who saw themselves as alternative, cultured and historic people distinct from the national norm. An interest in a meaningful past and a sense of an ever-changing present fed this concern for the region and for the Northumbria of Bede, St. Cuthbert and the castles, hills and crumbling Roman ruins that remain far from the smog and soot of industrial Tyneside and Wearside. With a perspective unavailable to the original ‘New Northumbrians’, Jackson is able to trace the bonds which connect the nineteenth century with the medieval and modern periods. This is a book which looks for continuities rather than change, channelling Fernand Braudel’s longue durée, and seeks to show how the hard-working, heavy drinking, sociable, macho and sentimental North East grew out of hundreds of years of contested border warfare and dangerous, but stimulating, industry.

Few histories of North-East England take the grand sweep of time selected by The Northumbrians and few have the range of sources, including poetry, song, art, film and television, analysed succinctly here. The book is arranged thematically rather than chronologically – a decision much to its benefit – and yet this composition still allows for a neat Bede to Brexit structure. Included are chapters on the North East’s medieval past; the martial, fighting tradition prevalent throughout the centuries; the work of the great inventors, scientists, engineers and tinkerers who formed the ‘Northumbrian Enlightenment’; the landscape and architecture (with a walking tour through the ‘Northumbrian Riviera’) of the region; its endemic sociability, hedonism and boisterous drinking culture; and, finally, the current political scene, where the old assumptions about a Labour-voting region are scrutinised.

There are elements of geography overlooked by other historians who have commonly seen the hyper-masculine, hard-working stereotype of the contemporary North East as stemming from the realities of working in the mines and industrial spaces of the region. Jackson certainly believes that work in dangerous industry has sustained a sense of toughness and a Stakhanovite pride in hard work, but a heavily contested Anglo-Scottish border came first and made sure that ‘violence was the dominant factor in Northumbrian lives in a way that was absent elsewhere in the rest of England’ (26). The region’s martial tradition, and its formidable fighting record in the two World Wars, emerges out of its blood-soaked past just as ‘living in a warzone made it prudent to huddle together for warmth and safety’ (28), and arguably accounts for its modern sentimentality, solidarity and communalism.

The macho-posturing associated with North East men may be seen today as one of the uglier aspects of the region’s historical hangovers, but learning, literacy and curiosity have also been part of its story through the ages. ‘The greatness of Northumbria in the Dark Ages was based less on its political power than on the distinctive Christian culture that flowered there in art and learning and religious piety’ (9). This emphasis on literacy, exemplified in the medieval period by the Lindisfarne Gospels, the Codex Amiatinus and the work of the Venerable Bede, filters through into the second golden age of Northumbrian history: the great era of the ‘Northumbrian Enlightenment’ and the extraordinary inventiveness of the Industrial Revolution.

This is a story usually told through the lives of gentleman inventors and tinkerers – George and Robert Stephenson, Lord Armstrong, Joseph Swan, Charles Parsons – but a focus on the achievements of many notable women – Mary Astell, Jane Gomeldon, Josephine Butler, Grace Darling – and the rigidly patriarchal society they inhabited freshens Jackson’s account. The rivers Tyne and Wear were then a ‘veritable Silicon Valley of Georgian England’ (63). Nineteenth-century Tyneside was a ‘sort of Dallas or Dubai’ or even Florence of the Industrial Revolution, ‘both entrepreneurial and highly literate’ (78); a centre of innovation, printing and study which welcomed many great figures including Charles Dickens, Daniel Defoe, Jean Paul Marat, Eça de Queirós, Oscar Wilde, Yevgeni Zamyatin, George Bernard Shaw and Ludwig Wittgenstein, among others.

This interest in knowledge and ingenuity is further illuminated in the twentieth century when a working-class intellectualism found expression in the pit villages and towns of Northumberland and Durham. Jackson admires his pitman painter grandfather and other autodidacts such as Thomas Burt, Jack Lawson, Sid Chaplin, John Gray and Norman Cornish, and discusses their work with insight and intelligence. The achievements of the working-class intellectual and leader of Newcastle City Council (1959-65) T. Dan Smith, however, are brushed over, with Jackson propagating many of the simplistic villain narratives that have found currency recently. Nevertheless, his concern for the accomplishments of many little-known Northumbrians livens the narration and will influence future work on the region’s cultural history.

There is a sense of a lost world in these pages, of a once great time now forgotten, even though so much of the past still arguably hangs over the current scene. That the North East was once so innovative, resourceful and enlightened, as well as dangerous, poverty-stricken and exhausted, may surprise some. For those yet to reckon with the compelling past of this peripheral corner of England, Dan Jackson’s The Northumbrians, a work of deep research and lifelong fascination, is an excellent place to start.

Tom Draper is a PhD student at Newcastle University. He writes about North East England at tom-draper.com and tweets at @tomdraper1.