In Power and Conflict in Russia’s Borderlands: The Post-Soviet Geopolitics of Dispute Resolution, Helena Rytövuori-Apunen studies Russia’s approach to establishing a presence beyond its territory, focusing particularly on the settlement of frozen conflicts in the post-Soviet space. Drawing upon historical concepts to better understand Russia’s multidimensional behaviour across three case studies, this book will be valuable for students and scholars in International Relations in showing how the deep border perspective is an important aspect of relations between states, writes Anna Nadibaidze. 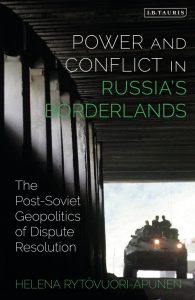 The concepts of state borders and sovereignty in International Relations have been challenged by the activities of transnational non-stage agents, without necessarily digging into how states can maintain the same type of connections that go beyond their formal borders.

Helena Rytövuori-Apunen’s Power and Conflict in Russia’s Borderlands seeks to contribute to this debate by studying the example of Russia’s attitude towards its neighbourhood and exploring the policy mechanisms that it has been using to establish a presence beyond its territory, particularly when it comes to the settlement of frozen conflicts in the post-Soviet space. Three cases are studied: the Russo-Georgian war of 2008 and the status of Abkhazia and South Ossetia; relations with Moldova and Transnistria; as well as the regulation of the Nagorno-Karabakh conflict between Armenia and Azerbaijan.

The author rejects starting off with the assumption that the ultimate goal of the Kremlin is to necessarily expand Russia’s territory into Eastern Europe, which has been a common belief in the analysis of Russian foreign policy, especially after the annexation of the Crimean Peninsula in 2014. Instead, this book digs deeper into history to explain Russia’s multidimensional behaviour in its ‘near abroad’.

Exploring the ‘variations of policies by means of which Russia tries to solve its post-Soviet border security dilemma’ (204), the book focuses on practices that are part of the larger concept of deep border arrangements, which may include different policies that are not necessarily expansionist. The goal is to study how Russia seeks power by controlling outcomes in the frozen conflicts, without assuming that its intent is to ‘establish dominations over territory’ (9).

The book also highlights that the meaning of power for Russia, both currently and historically, has been the ability to control things not only within its formal borders, but also through its connections with communities and local authorities beyond these.

The structure of the book is straightforward, as each chapter covers Russia’s practices of power in each of the case studies, focusing on how these deep borders are ‘created, consolidated and curtailed through the processes taking place around the settlement of the frozen conflicts’ (15).

The case of relations with Georgia was crucial and symbolic for Russia, given that it concerned the potential presence of NATO right at its doors. In the case of Abkhazia and South Ossetia, Russia was acting upon the historic principle that it has responsibility over populations beyond its formal borders (37).

One concept explored in this case study is vertical power, whereby the Russian government tries to support Russians living outside of the country and establish connections with them. It is a way of using soft power, including cultural and religious ties, but also includes socioeconomic benefits such as receiving Russian passports – a policy also adopted in relation to the eastern parts of Ukraine last year.

In Transnistria, Russia’s policies include efforts to participate in the regulation of the conflict and the importance of being included in European security affairs, while maintaining influence with the local population and advocating for Moldova’s neutrality when it comes to EU or NATO membership.

Russia’s security and national identity are not affected by Nagorno-Karabakh’s quest for independence, given the lack of a ‘direct and apparent Russian connection’ (149). Its importance is symbolic for Russia’s presence and leverage in the South Caucasus region, which consist of maintaining a security balance to minimise the outbreak of violence between Armenia and Azerbaijan (187). Moscow can maintain its deep borders by ‘tightening the knot from both sides’ and support a balanced relationship with both post-Soviet countries as well as an influential role in the resolution process, with the overall goal of maintaining influence in the Caucasus region (147).

A section in the concluding chapter looks at the historical, religious, linguistic and cultural links between Russia and the three conflicts in its neighbourhood and how they might influence the ways that the situations unfold in the future.

The case of the conflict in eastern Ukraine, which erupted in 2014 and is still ongoing, is also briefly explored in the conclusion, though the example could have easily been devoted a whole chapter on its own, especially given its current relevance. One can already make parallels between the deep border practices described in the book and the position of Russian President Vladimir Putin, who keeps maintaining that the people of modern-day Russia and Ukraine are ‘one’, completely ignoring the formal border arrangements and justifying Russia’s actions through this discourse.

The book makes contributions on two fronts. First, for those analysing Russia’s behaviour in its neighbourhood, the author draws upon some historical concepts, such as the idea of gosudarstvo, defined as the circle of the sovereign, a concept underplaying the relations between the central power and those it perceives as its subjects in the region (12).

Another concept explored is derzhava, which relates to holding on to authority in former USSR states with the goal of protecting people, which brings legitimacy to Moscow’s policies. This was seen with the annexation of Crimea, as the belief of the Russian people that the peninsula belongs in Russia helped in justifying the Kremlin’s policies (206). The case study of Transnistria also discusses how the support of Russian-speaking people in the region is part ‘of the legitimacy of rule and of the greatness of Russia’ (130). For those who have not studied Russian history in depth, these concepts help with understanding some of the features of the Russian state and how it seeks to retain influence beyond its borders.

Second, the study of borders in general is presented in an interesting light. Students of International Relations are used to learning that states’ sovereignty consists of authority within their own formal borders and territories, without realising that deep border practices are also an important aspect of relations between states. The practices that the Russian government have been using while dealing with its security issues in the post-Soviet space are affecting its relations with neighbouring countries.

However, as the author notes, these practices are not only used by Russia. The frozen conflicts examined as case studies provide convincing examples of how Russia ‘builds security around its own borders’, but this can be applied elsewhere too (206). Overall, looking into the policies that comprise the deep border perspective is intended to lead analysts beyond the ‘shallow view of Russia’ that we have when ‘we remain focused on the concept of the modern state territorially defined by its linear borders’ (3).

Anna Nadibaidze holds an MSc in International Relations from the LSE. Her research interests include European and Russian/Eurasian politics, international institutions, and discourse in IR. She tweets: @AnnaRNad