In Project Europe: A History, Kiran Klaus Patel offers a new critical history of European integration, focusing on the period between 1945 to 1992. This book offers many fresh insights on the ways that European nations have cooperated and integrated in the post-war period and is a great read for academics and general readers alike, writes Jacob van de Beeten. 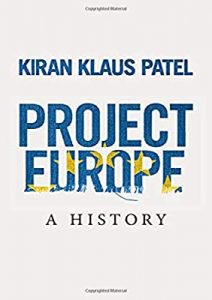 Anyone who has visited the House of European History, located in Parc Léopold just behind the European Parliament (the driving force behind the museum’s creation), will have noticed the implicit narrative present in the building’s architecture. Starting off on the dimly lit ground floor, visitors are guided through the historical developments of European nations, with special attention on the atrocities of both World Wars as well as fascist and communist ideologies. Only on the top floors, where natural light increasingly shines through, does the history of the European Union (EU) commence.

For a long time, historians have presented European integration using these tropes of light and darkness, creating a narrative in which the European continent progresses from the dark ages of nationalism to the bright present and future of Europeanism; from an age of war and destruction to a time of prosperity, peace and supranationalism. European integration is depicted as a linear, progressive development. And it is precisely these narratives that seem increasingly in question after a decade of crisis and as we approach the withdrawal of one of the EU’s largest member states, the UK.

As a self-styled ‘critical history of European integration’ (the original German subtitle), Kiran Klaus Patel’s book, Project Europe: A History, distances itself from these traditional narratives, providing a new way of looking at the history of European integration. Covering the period between 1945 to 1992, Patel adds nuance to the EU’s overly positive self-image and argues that the current crises are not as unique as we might think. In dispelling myths about the EU, Patel simultaneously takes aim at many of the contemporary criticisms of the EU. He does this in a book that has eight well-written and illuminating chapters, which focus on a range of different topics – from peace and security to the question of technocracy and disintegration. Patel himself recommends his readers start with the first chapter, but read the other chapters in no particular order. For this reason, rather than trying to summarise the book as a whole, I will draw out several of the lessons I have taken from this work.

One of Patel’s main arguments is that to understand why the effects of European integration are so far-reaching today, we must look back to the 1970s and 1980s. These decades are often regarded as a time of ‘euro-sclerosis’ in which no major institutional developments took place. Patel asserts, however, that it was precisely in this period that the European Communities (EC) – the EU’s predecessor – first acquired a significant role both within Europe and in relation to the rest of the world. Looking back to this period is thus indispensable in understanding where we are today.

The first chapter of Project Europe shows how European integration became the most potent international organisation in post-war Europe. Contrary to conventional beliefs, it was by no means clear at the time that the European Coal and Steel Community (ESCS), and later the EC, were destined to become Western Europe’s primary forum of international cooperation. In the immediate aftermath of World War Two, the ESCS barely stood out. It had to compete with a whole range of other organisations – such as the Western European Union (WEU), The UN Economic Commission for Europe (UNECE), the Council of Europe and the Organisation for European Economic Cooperation (OEEC) – which were not only founded much earlier than the ESCS, but also had more members and more ambitious goals.

Patel explains how three characteristics of the EC allowed it to surpass many of these other international organisations in the long run. First, the initial narrow economic focus allowed European integration to extend to ever more areas through spillover effects from one policy area to the other. Establishing a Common Market inevitably raises questions about environmental and hygiene standards, consumer protection and social policy. Secondly, contrary to the other organisations, the EC had a binding set of rules which were directly implemented in national legal orders. Finally, the EC had far greater financial resources at its disposal than other Western European organisations.

Crucially, however, Patel points out that it was not until the 1970s and 1980s that the EC emerged as the most potent and versatile Western European organisation. From then on it started to take over many of the functions that previously were performed by those other organisations; Patel shows how this led to the first calls for differentiations or ‘Europe à la carte’. Moreover, this development also made the EC more crisis-prone. In the author’s words: ‘if everything that matters is brought under one roof, the firewalls that once separated different organisations are lost.’ By bringing these other organisations back into the picture (Patel elsewhere calls this  ‘Provincialising the European Union’), Patel is able to show there never was a masterplan or a blueprint to integrate Europe. Rather, historical contingencies, strong personalities and external influences created the EC – and, by extension, the EU – we know today.

Many of the following chapters take up this theme, with a particular emphasis on the role of the United States in the integration of Western Europe – a fact that is often conveniently forgotten (even though the term ‘integration’ was brought to Europe by US politicians and academics). In the chapter on peace and security, Patel shows how maintaining peace in Western Europe was one of the initial motivations driving European integration, with the particular aim of defusing Franco-German tension. However, the effect of peace as a motive was very modest and should not be overestimated. Economic and geopolitical interests and concerns often dominated the decision-making process, which in any case was heavily influenced by the US.

Patel therefore concludes that the EC profited more from relative peace in Europe than it practically contributed to it. However, to those arguing that the peace motive can no longer legitimise European integration, he responds that over the decades the role of the EC as a guarantor of peace has become ever more prominent. Since the 1970s and 1980s, the EC has considerably widened its range of instruments to promote peace in Europe and beyond – think, for example, of the EU’s contemporary development and neighbourhood policies.

Patel uncovers a seemingly similar paradox when it comes to prosperity. The existence of the EC was often legitimated for contributing to the reconstruction of post-war Europe. Surveying the existing literature on the impact of the EC on the economic growth of its member states, Patel finds that initially this contribution was very modest. He concludes that the ‘economic role of the EC during the trente glorieuses [the period of uninterrupted economic growth in Western Europe between 1945 and the mid-1970s] should not be overstated’. On the other hand, in the following decades, he finds that the EC was of greater importance, ensuring stability during the oil crises in the 1970s and the recovery period that followed. Again, we see that what starts out as myth turns into more than that over time.

Of the two most interesting facts that Patel conveys, one directly concerns the UK. The first fact is that while more and more people on the continent started to identify the EC with ‘Europe’ during the 1970s, in the UK the term ‘Common Market’ was preferred. Secondly, and more importantly, Patel convincingly argues that Brexit is not as singular and unique as often thought. In one of his most lucid chapters, Patel discusses the departure of first Algeria, and later Greenland, from the EC. Due to limited space, I will briefly discuss the latter.

In the 1980s Greenland organised a consultative referendum, in which a small majority of 52 per cent of the population voted to leave the EC. Those advocating exit attached particular importance to regaining control over Greenland’s fisheries. Sounds familiar? Patel not only shows how even after exiting the EC Greenland had no choice but to keep its waters open (protocols specifying the future relationship were concluded on exit), but also that in later decades the ties between Greenland and the EC actually deepened.

This episode thus tells us that long before Brexit, European integration turned out to be a potentially reversible process, despite the rhetoric regarding its ‘irreversibility’ and the march towards ‘ever closer union’. In many aspects, Patel thus offers a comforting message: integration and disintegration have always gone hand in hand. Disintegration should be seen as part of political normality, rather than as a catastrophic event with the potential to break the EU apart.

In sum, Project Europe offers many fresh and lucid insights on the ways in which European nations have cooperated and integrated in the post-war period. It is a great read for academics and general readers alike, adding much needed historical facts and figures to debates in which mythmaking on both sides of the argument prevents a clear view on the past, present and future of the EU.

Posted In: Britain and Ireland | Contributions from LSE Staff and Students | Europe and Neighbourhoods | History | Politics