In The Ghetto, Bryan Cheyette offers a new addition to the Oxford University Press series of ‘Very Short Introductions’, distilling the long history of the changing meaning of the ‘ghetto’ across the globe and through time over six succinct chapters. With the author’s expertise in modern literature and culture bringing a new angle on the topic, Laura Vaughan highly recommends the book to readers new to the subject, as well as to those who wish to deepen their knowledge through its excellent bibliography. 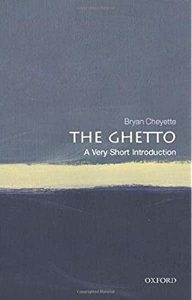 , the latest addition to the Oxford University Press series of ‘Very Short Introductions’, distils the long history of the evolution of the ‘ghetto’ as concept in six succinct chapters. While the subject has recently had a comprehensive analysis from a linguistic point of view (see Daniel B. Schwartz, 2019), and from a more traditional historical perspective prior to this (see Mitchell Duneier, 2016), author Professor Bryan Cheyette’s expertise in modern literature and culture brings a new angle on the topic.

The book offers a chronological presentation of the term ‘ghetto’ – from meaning an enforced enclosure to simply describing Jewish quarters following Napoleonic emancipation, its transmigration to the US where it became most commonly associated with poverty, and the latter-day use of the term to label the confinement of African Americans in North American urban neighbourhoods. Through this, the book demonstrates the duality, and frequent multiplicity, of how ghettos functioned: to contain but also to protect; to inhibit economic integration but sometimes to seed financial success; to reinforce religious singularity, yet sometimes to generate rich cultural creativity; to be a uniquely Jewish urban formation, yet on occasion to follow similar rules to those imposed on other minority groups within a city. This extraordinary ‘Janus-faced’ aspect of the ghetto helps explain, Cheyette demonstrates, its ability to shift shape over the centuries.

Cheyette introduces the idea of the ghetto by opening with its foundational origins: the Jewish quarters of Christian Europe. Starting earlier than many previous works (which typically begin with the establishment of the Venice Ghetto in 1516), the book opens with Jewish life during mediaeval times, when frequently Jewish quarters involved the containment, though not necessarily confinement, of the cities’ Jewish inhabitants within semi-autonomous walled areas. Notably it is only from the sixteenth century onwards that such arrangements were termed ghettos, using the Venetian example. New insights into the wider context of European history of this period help explain the subsequent waves of European Jewish prohibition, regulation, physical segregation and, in some cases, expulsion. We thus gain an understanding of the interaction between political, religious, financial, mercantile and occasional public health expediencies that shaped patterns of Jewish settlement over the centuries.

The chapter ‘Ghettos of the Imagination’ provides a fresh take on the subject, with its fascinating tour through the transformation of the meaning of the ghetto in post-Napoleonic literature. By tracing the term’s use in German prose and poetry, the analysis reveals how the popularity of authors such as Heinrich Heine and Berthold Auerbach helped spread the ghetto as an idea – rather than a particular place – throughout the German-speaking world. The breadth of this chapter, covering fiction in French as well as German and English, helps expand the understanding of how the ghetto moved into the modern world. This chapter also reinforces the importance of Israel Zangwill (known as the ‘Jewish Charles Dickens’) in the transplantation of the ghetto to the ‘New World’ via writers such as Abraham Cahan.

This book highlights an important turning point: with the use of the term ghetto during the Nazi period. Cheyette cites Schwartz’s analysis of this shift in meaning, with an increase in the use of the term conceptually after the Nuremberg Laws of 1935 and, after Kristallnacht in 1938, as a matter of policy. Thus, after the invasion of Poland in 1939, the country’s many instances of historically self-governing urban Jewish quarters were, through a cynical distortion of the meaning of the term, renamed ghettos – transformed into a staging post on the road to the ‘Final Solution’. Cheyette writes that ‘by returning Jews to the ghetto […] it was as if [they] were merely reverting back to less troubling times’ (63). In this context, the ghettos of the Polish cities of Łódź and Warsaw are shown to have been prototypical for different reasons: the former, since supposedly productive workers survived for a longer time than others; the latter for its underground activity and, subsequently, its famous uprising.

Yet the chapter also emphasises the temporal and geographical diversity of this period’s ghettos that consequently led to different trajectories of the path to Nazi genocide by bringing into focus the role that Nazi ghettos played in the planned genocide of European Roma. For example, Cheyette states that 5000 Roma (out of 30,000 in Poland) entered the Łódź ghetto towards the end of 1942 at the same time as 20,000 Jews were transported there from major Western and Central European cities, including Berlin, Vienna, Prague and Frankfurt (72).

The penultimate chapter takes us back across the Atlantic, picking up the ghetto narrative by emphasising a critical turning point in its meaning: to inner-city, primarily African American, neighbourhoods, quoting Martin Luther King’s observation that ‘being Negro in America means being herded in ghettos’ (89). This is an important section, given current debates regarding the reasons for the apparent persistence of socioeconomic segregation in majority black neighbourhoods in the US. Cheyette describes how James Baldwin’s famous letter, ‘My Dungeon Shook’, argued that by the 1960s the shape-shifting concept of ghetto had become synonymous with inner-city slums, its connotation now emphasising that these were places from which there was no apparent escape.

Yet Cheyette also shows how African American writers highlighted the need to distinguish between the ‘old ghettos’ of the Nazi era and the ‘new ghettos’ of African American hardship, notwithstanding the severity of conditions in the latter. This chapter’s sections on Chicago and New York each shed light in turn on these apparent exemplars of the new ghetto. Here again, the author’s wide-ranging knowledge of literary texts widens the standard scope of ghetto histories – showing, as we saw in the previous Jewish examples, how the ghetto could be both haven (though rarely heaven) and hell. The passage on Harlem’s Renaissance is especially telling in this context, describing how the district attracted a rich array of musical and literary creativity. Indeed, Cheyette points out that Harlem was the first neighbourhood to resist being called a ghetto. Yet he also shows that the tension between imagined and real ghetto continues to be manifested in contemporary music and fiction, resulting in a deep-set loss of hope in some cases, despite the growth of an African American middle class outside of these areas.

The author argues that the term ghetto has nowadays been appropriated so widely that its use runs the risk of obscuring any specificity of local place and local culture. In other instances, it ‘combines local experience with a global style’ (123). The book closes with an important point: to retrieve the complex meaning of the term, we need to take account of its history. Only by doing so will we achieve a better understanding of whether its use is relevant. This overview of the changing meaning of the ghetto across the globe and through time is highly recommended for readers new to the subject, as well as for those who wish to deepen their knowledge through its excellent bibliography.