In Resource Radicals: From Petro-Nationalism to Post-Extractivism in Ecuador, Thea Riofrancos examines how conflicting visions of resource extraction have divided the Ecuadorian Left, focusing particularly on the struggles between the Ecuadorian government and grassroots anti-extractivism activists during the era of Rafael Correa’s governance. This is an insightful and thought-provoking book that offers a timely contribution to scholarship exploring political struggles over resource-driven development, finds Sibo Chen. 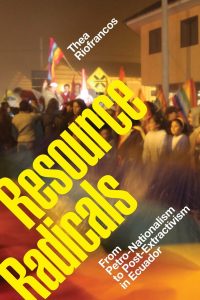 In recent years, there has been a steady growth of studies on the ‘Pink Tide’ experience in Latin America — the notable turn towards left-wing governments in Latin America around the start of the twenty-first century — and its implications for regional political economy and social-environmental conflicts. Following this trend, author Thea Riofrancos examines how conflicting visions of resource extraction have divided the Ecuadorian Left in Resource Radicals: From Petro-Nationalism to Post-Extractivism in Ecuador. Drawing upon a wide range of sources gained from fifteen months of fieldwork, the book presents an in-depth analysis of internecine struggles between the Ecuadorian government, which focuses on economic development via resource nationalism, and grassroots anti-extractivism activists, who strongly oppose the government’s lean toward extractive industries due to social and environmental concerns.

The book’s narrative begins in 2007, when Rafael Correa was elected as the 45th President of Ecuador with support from a disparate group of leftist organisations. Correa’s victory marked a fundamental break from Ecuador’s past economic policies. During his tenure (2007–17), Ecuador rejected neoliberalism and attempted to replace it with a series of progressive reforms that sought to improve the country’s economic equality and living standards. Resource extraction still served as the primary funding source for these reforms. Through strong state presence and information campaigns promoting the public benefits of resource development, the Correa government sought to de-politicise resource extraction and frame it as a technical affair, which offers a viable path toward a redistributive post-neoliberal state.

Unsurprisingly, Correa’s reforms were opposed by foreign corporations and domestic elites. What complicated the political struggle, however, was fierce resistance to these reforms among many social activists who had resisted neoliberalism for decades and supported Correa’s leftist election platform. Accordingly, the central question that Resource Radicals seeks to address is how the radical politicisation of resource extraction led to the Ecuadorian dispute between a self-described socialist government and many grassroots activists who helped bring it to power.

Image Credit: Crop of ‘The Climate Strike on September 28, 2019 in Quito Ecuador’ by Kai Medina licensed under CC BY SA 4.0

According to Riofrancos’s analysis, political struggles over oil exploration had offered a wide range of critiques against neoliberalism prior to the Ecuadorian Left’s electoral victory. These critiques targeted the social and environmental impacts of extractive projects and envisioned two pathways toward establishing a post-neoliberal state: ‘radical resource nationalism’, which seeks popular and democratic control over oil and minerals; and anti-extractivism, which opposes all forms of resource extraction in pursuit of a harmonious relationship between humans and nature.

Notably, the substantial reorientation that occurred in Ecuador and many other Latin American countries was driven by historically high primary commodity prices during the first decade of the twenty-first century. The reliance on soaring demand for primary commodities from ascending industrial powers like China and India has trapped Latin America into the boom-and-bust cycles of global commodity markets. In this regard, the post-neoliberal transition envisioned by radical resource nationalism is not ‘a total rupture with prevailing power structures’ (11): it seeks to increase the income of the poor without structurally changing class relations. Consequently, the logic of the market economy continues to shape the parameters of state intervention and corporate investment in resource sectors.

While the Correa government considered the international financial system, foreign corporations, domestic oligarchs and corrupt political parties as the major political and economic enemies of radical resource nationalism, deepening fiscal dependency on expansive extractive activities led to escalating political division between the Correa government and indigenous, campesino, environmental, labour and feminist social movements. Many activists within these movements condemned the rapacious exploitation of nature and the subordination of indigenous communities. Their articulation of anti-extractivism advocates for an alternative form of economy surpassing the very concept of development in both capitalism and socialism.

Throughout Resource Radicals, Riofrancos documents a variety of anti-extractivism movements, such as the 700-kilometre march from Pangui to Quito, which she directly participated in; the discursive struggle over how to interpret Ecuador’s 2008 Constitution (the first in the world to recognise the inherent rights of nature); and frontline communities’ fight for the right to prior consultation and the protection of communal territories. By sharing stories on how extractive projects caused massive social and environmental damage (for example, deforestation, drinking water contamination, the displacement of indigenous communities, the violation of collective rights, etc), Riofrancos clearly takes a sympathetic stance on anti-extractivism movements.

Her insights into the dynamics of these movements explicate why to some frontline communities the threats posed by the Correa administration were little different from the colonial forces they had endured for centuries. By doing so, Riofrancos reveals the political factors driving some anti-extractivism activists’ radical opposition to all forms of resource extraction. Under the banner of anti-extractivism were the anti-extractivism Left’s collective struggles for new forms of democratic participation, the recognition of their own knowledge on land and waterways and a post-neoliberal state with genuine commitment to decolonisation and sustainability.

Riofrancos presents radical resource nationalism and anti-extractivism as diametrically opposed with little room for compromise. She further asserts in the Conclusion that the disputes dividing the Ecuadorian Left epitomise two major dilemmas underlying the Pink Tide. First, from the position of leftist governments, they have struggled to balance achieving economic equality and avoiding deepening economic dependency. Second, from the position of social movements, they have found it difficult to protest against leftist governments whose avowed goals align with their longstanding demands.

In Riofrancos’s view, one possible solution for both dilemmas is to revive the radical imagination of ‘twenty-first-century socialism’, which promises ‘collective, democratic control over the conditions of socio-natural existence’ (182). It is disheartening to see in the case of Ecuador that socialism in Correa’s usage paid little attention to structural changes in the model of accumulation and class relations, whereas anti-extractivism’s fight against the threat of oil extraction and mining was unable to mobilise the majority living outside frontline communities.

Overall, Resource Radicals presents an insightful first-hand account of fierce political conflict over extractivism within the Ecuadorian Left during the era of Rafael Correa’s governance. Compared with other studies on the Pink Tide, Riofrancos takes a bottom-up approach and treats resource extraction as a historically dynamic field filled by divergent narratives. The book’s analysis of political struggles over resource-driven development as well as the intertwined relations between nation, state, territory and resources offers a timely contribution to critical scholarship. In particular, scholars following the trending blockadia movement across the globe would find the book’s discussion on indigenous rights and land-based knowledge production informative. Although its strong theoretical tone may be challenging for general readers, the book successfully captures the economic and political questions raised by postmillennial extractivism and addresses them with a passionate imagination of an anti-neoliberal popular sector coalition. Resource Radicals would be an interesting and thought-provoking read for senior undergraduates and graduate students in environmental studies and related fields.