In Innocent Subjects: Feminism and Whiteness, Terese Jonsson explores how mainstream feminism continues to be widely defined and theorised through a white lens and therefore continues to neglect race and intersectionality. This well-articulated and accessible book offers a valuable and coherent introduction to those looking to better understand the relationship between white privilege and feminism, writes Sofie Gregersen. 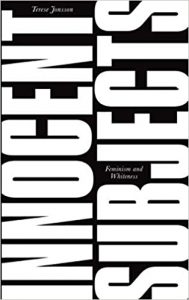 It’s 2021, intersectional feminism is one of the hottest buzzwords of our time (as well as an incredibly popular hashtag on Instagram) and white feminists all across the globe are increasingly positioning themselves as aware of and attentive to racial differences. Yet, as Terese Jonsson argues in her book Innocent Subjects: Feminism and Whiteness, mainstream feminism continues to be widely defined and theorised through a white lens, and thus continues to neglect the effects of race, racism and racialisation both in (white) feminist spaces and in theorising by white feminist scholars.

As an introductory book on white feminism in Britain (as well as elsewhere in the West, although Jonsson, a white British feminist scholar and editor, mainly focuses on the UK context), this book hits the nail on the head regarding a central problem with contemporary mainstream feminism: its overwhelming whiteness and the failure of many of the most prominent white British feminists to pay proper attention to race and intersectionality. It also beautifully explains how the long-established feminist wave analogy has been overwhelmingly defined by white women’s ‘commitment’ to and involvement in feminism, and by the glaring omission of activism, scholarship and organising done by feminists of colour.

For those not familiar with scholarship and literature on Black feminism and feminist postcolonial theories, this book will offer a lot of new knowledge, as Jonsson’s arguments originate directly from these scholarly and activist traditions. No original points in relation to Black feminist and feminist postcolonial research and inquiry are produced, but Jonsson makes it clear, both with her words and positioning, that this is not the objective of her book. It is not a tool for understanding feminism, but rather for understanding the vital and inextricable role that whiteness plays in shaping Western ideas of feminism as hegemonic and colonial.

This distinction between ‘feminism’ and ‘white feminism’ is critical to note, as the idea of a ‘universal’ feminist cause that need not properly account for the effects of race and other differences is exactly what Jonsson is critiquing. Instead of falling into the same pitfalls as previous white feminists in preceding works, this book acknowledges that those feminist efforts that are afforded recognition by the most prominent feminist authors are, both in colour and ideology, overwhelmingly white. 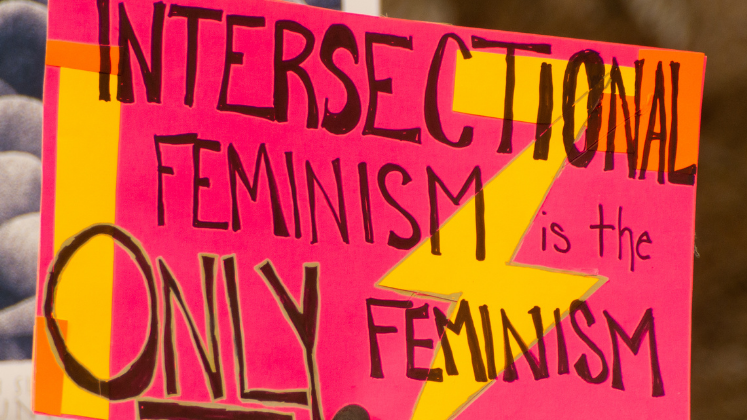 Image Credit: ‘Intersectional Feminism is the Only Feminism’ by Marc Nozell licensed under CC BY 2.0

To situate the book, the first two chapters address the longstanding relationship between feminism and racism in Britain. Jonsson skilfully locates her critique in historical and contemporary race and feminist relations and politics in Britain, and provides a thorough race-critical and feminist reading of contemporary Islamophobia, the sustained marginalisation of scholars of colour in British academia, contemporary British politics and colonial idea(l)s of a white British society. She then delivers a walkthrough of British feminist politics during the 1980s, in which white feminists were ‘forgetting empire’. She touches on some of the critical work done by Black British feminists and other British feminists of colour such as Avtar Brah, Sara Ahmed, Reni Eddo-Lodge, Akwugo Emejulu, Nydia Swaby, Francesca Sobande and Heidi Mirza, and illustrates how this work has subsequently shaped white British feminism.

Throughout the next chapters, Jonsson critically analyses some of the most prominent British feminist scholarship from the 1970s to the 2010s, as well as contemporary reporting on feminist politics in the liberal British press. Refreshingly, the stereotypical British fondness of indirect communication is entirely absent: Jonsson lays the cards flat out on the table and engages directly and unapologetically with her chosen feminist scholarship. She delivers a sharp, concise and rhetorically convincing analysis of the myriad ways in which white British feminists have gone from historically neglecting the undeniable importance of race to contemporarily positioning themselves as attentive to race and difference, and more than willing to acknowledge that feminism, in the past, was ignorant about race. This trajectory of mainstream feminist narratives has, however, as Jonsson demonstrates, skipped the step in which white feminists acknowledge their complicity in racism and in excluding feminists of colour from their spaces, and in which they commit to anti-racism and decolonising feminism.

From historical localities to contemporary performative ‘wokeness’, Jonsson wraps up by painting a picture of a ‘new feminism’: the kind of feminism that is activistic, ostensibly intersectional yet still suffused with white liberalism. Although some strides have been made, the inability to properly grasp the materiality and affectivity of race and racism still overwhelmingly characterises more recent books on feminism as well as feminist debates in the liberal British media. Whilst white feminist innocence originated from ignorance of race in the past and contemporary innocence is constructed by acknowledging the importance of the work done by feminists of colour, mainstream feminism in Britain still maintains white women as the central and normative subjects of feminism. This is the central point of the book as well as its title: white women as innocent subjects, both past and present – but for different reasons.

Reading this book as a white Scandinavian scholar educated in British, US-American and Nordic institutions, a key element of Jonsson’s book that stands out is the careful and proper attention that is paid to positionality and the politics of location that influence the process of producing scholarship about whiteness as a white feminist scholar. This not only attests to Jonsson being intimately aware of being an inextricable part of the very ideas and positions that are being critiqued. It also provides an example for other white scholars who, instead of wilfully participating in the white race to innocence, wish to unpack the ways in which their scholarship contributes to the unquestioned normalisation of a white perspective.

Jonsson does not attempt to claim that her way of doing this is the right one, or the only one for that matter, as doing so would position her scholarship not far away from that which she is critiquing. Throughout, she also keeps a continuous and welcomed focus on the politics of citation, urging readers to engage with the citations in her book as original works and not as existing only as derived from her book. Citing Sara Ahmed, citations operate as ‘academic bricks’ that construct the walls of whiteness, and this is a timely and important reminder of how to approach critiques of whiteness by white scholars and the politics of knowledge production more broadly.

For people of colour reading this book (and feminists of colour in particular) as well as those well versed in Black feminism and feminist postcolonial theorising, the insights of this book are likely to be superficial. Jonsson makes a point of not solely addressing white feminist readers. However, a crucial part of the white learning curve, about how white supremacy is perpetuated, entails acknowledging that the knowledge we gain in developing a racial ‘consciousness’ is likely to be anything but novel to those who have been marginalised by whiteness. Jonsson’s book is nonetheless well-articulated and accessible even for those with no prior knowledge of feminist whiteness. For those readers in particular, this book will provide a brave and coherent introduction to the relationship between white privilege and feminism, as well as offering a substantial list of citations for further reading on feminism as it should be: intersectional and constantly critical towards whiteness.

Sofie Gregersen is a PhD Candidate at the University of Helsinki. Her doctoral thesis critically interrogates constructions and deconstructions of racial identities, and focuses on how the white racial identity is developed and navigated in a Nordic context.