In Platform Socialism: How to Reclaim our Digital Future from Big Tech, James Muldoon explores how to bring about a reorganisation of the digital economy through the social ownership of digital assets and democratic control over digital infrastructure and systems. Inspiring hope in the possibility of a socialist platform economy, this is a refreshing book that will succeed in transforming readers’ perspectives, writes Nika Mahnič. 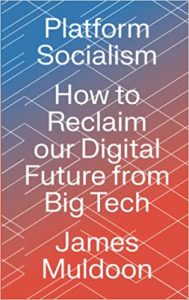 The title of James Muldoon’s latest book Platform Socialism: How to Reclaim our Digital Future from Big Tech does not promise more than it delivers. If Nick Srnicek’s Platform Capitalism was the first book to write about the role of digital platforms in organising our economy, and Shoshana Zuboff’s The Age of Surveillance Capitalism the most famous work by a non-Marxist to analyse the current state of capitalist development, Muldoon’s academic manifesto achieves even more.

With an analytical gaze directed towards the forgotten socialist alternatives of the past and radical projects of the present, Platform Socialism uncovers prototypes and proposals for institutional change at the local, civic, international and global scales. The author analyses and proposes tactics for resisting, regulating and re-coding digital platforms through radical institutional reformism. He defines platform socialism as ‘the organisation of the digital economy through the social ownership of digital assets and democratic control over the infrastructure and systems that govern our digital lives’ (3).

Muldoon is well-equipped to bring the question of civic participation into the debate on platform capitalism. Platform Socialism builds on theoretical frameworks developed in his 2018 book, Council Democracy: Towards a Democratic Socialist Politics, and his 2020 work, Building Power to Change the World: The Political Thought of the German Council Movements. Moreover, he demonstrates great knowledge of the industry, most likely gained through his work at the Autonomy think tank.

Besides the accelerated digitalisation that has accompanied the COVID-19 pandemic and the shift to government as a platform (GaaP) approach, at least in the UK, another reason for the timeliness of this book is the recent victory of socialist Gabriel Boric in Chile, which promised the death of neoliberalism in the state known for a radical application of neoliberal structural reforms. What preceded neoliberal reforms in Chile was the rule of Salvador Allende (1970-73), who joined forces with British cyberneticist Stafford Beer. The latter devised Cybersyn, a project that aimed at decentralising power and economic decision-making. There is indeed something to learn from this past, and something to be excited about, as demonstrated by a tweet from Evgeny Morozov, another theorist addressing the issue of socialist calculation.

Fingers crossed for the Chilean elections tomorrow – truly hoping that @gabrielboric will win, so that we can all start working on/helping with Project Cybersyn 2.0!

Faithful to the cause of bottom-up participation, Muldoon attacks the issue of people’s engagement: what is it that which we expect from the state, and the private sector, in an era in which communities and individuals are (de)platformed by private corporations? The blurred line between the delegation of state functions to public and private actors, in Muldoon’s words, is important because ‘private control over digital infrastructure enables companies to shape the structural conditions of our politics’ (63). In addition, Muldoon connects the interrelations between the public and the private to differences between platform users, linking this inequality of access to human rights, not solely consumer rights. He asks: ‘Are we comfortable with a framework in which some people’s market-mediated human rights could be worth ten times more than others?’ (64)

His criticism of the limitations of statist accounts are informed by a somewhat forgotten tradition of guild socialism. In Chapter Five, ‘Guild Socialism for the Digital Economy’, he excavates the thinking of G. D. H. Cole and Otto Neurath and applies their pluralist socialist thought to the governance of democratic platforms.

An example faithful to their critique of a big socialist state would be the principle of subsidiarity, which privileges communal, local and proximate platforms rather than big technological mediators. In particular, Muldoon envisions this smallest-scale approach in the cases of short-term rental platforms, app-based ride hailing services and food delivery platforms. In the case of healthcare, childcare and social security, Muldoon envisions the provision of these at the level of the state and national governments. He sees a limit to decentralisation in the case of global services such as social network platforms and internet search engines as it is ‘difficult to decentralise without destroying the fundamental benefit the service brings’ (86). But isn’t destroying the benefits of convenience offered by big and well-designed platforms the very thing that we should accomplish to change the status quo?

This is a limitation worth pondering while reading Chapter Six, ‘Building Civic Platforms’, in which Muldoon engages with concrete examples of platform cooperativism and the new municipalist movement, which he considers the necessary steps on the way towards platform socialism. Platform cooperatives are ‘digital platforms owned and controlled by the people who participate in them’ (101), and new municipalism is a movement invested in shifting power towards local authorities and away from nation states. He proposes replacing public-private partnerships with public-common partnerships.

Interestingly, Muldoon does not engage with Nick Couldry and Ulises Meijas’ book The Costs of Connection, which theorises data colonialism. That aspect would add an additional layer of complexity to pulling the levers of change at our disposal. How can we enact socialist change if we conceive of the most powerful platforms as colonisers subjecting us to the contractual terms that overrule our communal power? Both Couldry and Meijas, as well as Muldoon’s work, propose a non-aligned movement, which I consider an important idea to work with, particularly if we seriously reflect on the questions raised by infrastructural dependency.

A call for a non-aligned movement, historically a group of postcolonial nations, teaches us that not all political animals are created equal. Muldoon’s framework hints at this: for example, in his recognition that platform cooperativism holds the danger of ignoring the needs of the marginalised and vulnerable. However, a more detailed engagement with the work of abolitionist feminists active in the field of critical data studies, such as Ruha Benjamin or Safiya Noble, or recent environmentalist critiques by Kate Crawford, would offer an even richer framework for radical social change. The ‘we’ of Muldoon’s book have the responsibility to work with the fact that our communities are not all surveilled, digitally ‘empowered’ and monetised in the same ways.

Platform Socialism is a refreshing contribution to the pile of grim books analysing the current predicament. It gave me hope and inspired willingness to continue thinking and fighting for a socialist platform economy, which is much needed in times when the digital enclosure, as well as climate urgency, is threatening our abilities to change the worlds we inhabit. Such academic books are rare, and Muldoon’s work achieves the important task of transforming our views, so we can continue believing we can change the world.

Nika Mahnič is a PhD candidate in Politics at Queen Mary University of London, funded by the Arts and Humanities Research Council (LAHP). Their doctoral research is on data-driven governance, in particular proprietary analytical tools in UK public administration and their impact on public policy. At King’s College London, they assist the Civil and Political Rights and Social Justice and Policy Analysis modules. Nika is part of the editorial board of the Journal of Future Robot Life and the scientific committee of Danes je nov dan institute.