In Tradition in the Frame: Photography, Power and Imagination in Sfakia, Crete, Konstantinos Kalantzis explores the experiences of Sfakians in Crete to reflect on how tradition is made meaningful today and what this can tell us about the dynamics of localisation, globalisation, modernity and belonging in our contemporary world. This is a rich and enjoyable read that will be of interest to scholars and students looking for new, generative approaches to visual culture at the intersection of the local and the global, writes Kristina Gedgaudaitė. 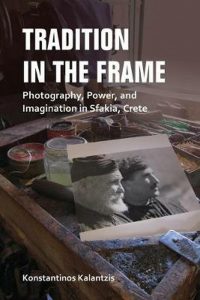 Bearded and whiskered men, wearing breeches and headscarves. Folklorists, botanists, photographers and explorers, in search of authenticity in rural Crete. Hunters and shepherds in rugged mountains. Hospitable coffeehouse owners. Greek and foreign tourists on the lookout for an adventure. Film crews recruiting extras for the shooting of a comedy drama. These are some of the people we encounter in Sfakia, Crete, as seen through Konstantinos Kalantzis’s Tradition in the Frame. Through these encounters, tradition emerges not as some timeless essence, capturing the nature of a people and passed on unaltered from generation to generation, but as a dialogical process of cultivation, negotiation and, at times, playful reversal, involving sustained efforts on behalf of different actors.

This book is the fruit of more than a decade of research, and Kalantzis’s sharp insights and elegant prose make it a rich and enjoyable read. While firmly grounded in the field of visual anthropology, Tradition in the Frame will be of interest to scholars and students across the humanities and social sciences, especially those who are looking for new, generative approaches to visual culture at the intersection of the local with the global.

The book casts a look on Sfakia, the mountainous and coastal region in southwestern Crete, to explore the ways in which tradition is made meaningful today and what it can tell us about the dynamics of localisation, globalisation, modernity and belonging in our contemporary world. 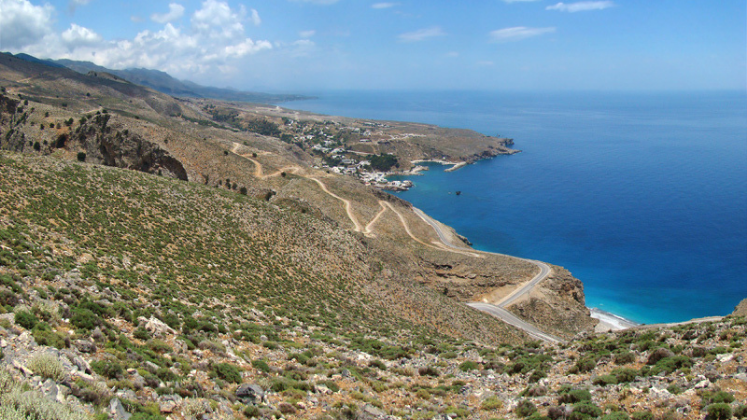 Image Credit: ‘Sfakia, Crete, Greece. With a view on the town of Hora Sfakion down the coast’ by Tango7174 licensed under CC BY SA 4.0

Tradition in the Frame is divided into three parts, consisting of eight chapters and a brief epilogue summarising the conclusions. The chapters of the first part contextualise the rugged geography of Sfakia and explore the role that Cretanness, and specifically Sfakianness, plays in the national imaginary, equally shaped by folklore, popular culture, tourism and the advertising industry. The second part builds on the groundwork of the previous section to explore the variety of contexts in which images become vehicles for Sfakians’ own identity expression and to discuss the field of power shaping those relationships. Finally, the third part of the book focuses on how Sfakians negotiate their understanding of modernity, including its entwinement with the tourism industry.

Using Guy Debord’s words as an opening quote, from the very start the book draws readers’ attention to the ‘social relationship between people mediated by images’. In Tradition in the Frame, images thus function as mini theories to conceptualise such relationships and the wider networks of signification in which they become embedded. Orientalism and exoticism are the two key concepts framing the main argument. Kalantzis points out that while these rely on ‘the placement of subjects in particular positions and the expectation that they perform in them as expected’ (4), the subjects themselves are active participants in the framing process, often re-performing on their own terms the frames they are cast into. The book uses extensive ethnographic evidence to show the myriad ways in which such subject positions are produced.

The most vivid image across the book is the traditional image of a Cretan – a bearded man, often a shepherd, wearing a black shirt and breeches. Each recuring appearance of this image – in archival photographs, tourist postcards, children’s drawings, advertisements and family albums – serves as a way to show the genealogy and nuance in our understandings of tradition and the ways it is perceived and performed in contemporary Crete.

We thus learn that this traditional image of a Cretan is associated with values of hospitality, honour, freedom and masculine bravado, which can be interpreted both as a source of pride and a signal of danger. On the one hand, this image is viewed as a symbol of heroism originating in resistance to the Ottoman Empire – a stereotype that came to play a powerful role in the political discourse of austerity-riddled Greece during the decade of the so-called Greek crisis. On the other hand, these same features are routinely perceived as expressions of ‘barbarism’, ‘danger’ and ‘crime’ in the popular imagination. Mutable subject positions such as that of a ‘typical Cretan’ become fully visible through Chapters Three, Four and Five, discussing the performances of the Sfakian stereotypes at the national and local level.

One of the most effective metaphors that brings the ambivalence on which the Sfakian identity balances can be found in Chapter Five. Discussing the actual filming of the comedy drama First Time Godfather (Proti fora nonos, directed by Olga Malea, 2007), Kalantzis compares the interrelations between the national imaginary and the individual to a film set: while film directors are in control of the overall process, extras can productively shift meanings through their small gestures of defiance. What is particularly admirable about the work of Kalantzis is how subtly he manages to portray the agency of the local Sfakians while negotiating their subject positions, cast between tradition and modernity. Perhaps the most moving examples of this process can be found in Chapter Three, when locals reclaim the anonymous images of ‘a Cretan type’ from the national imaginary by inscribing the sitter’s name and locality in the margins of photobooks or publicly displayed posters.

Another filmic metaphor – the montage logic – is used to illuminate how contemporary Sfakians accommodate demands of tradition and modernity in their daily lives. In such a montage, Coca Cola bottles are quickly hidden from view when taking photographs of the local festivities, while modern milking equipment is viewed as a necessity and thus dismissed as not interfering with local customs. Interestingly, while modernity is often highlighted as intruding on tradition by Greek visitors to the island, for foreign tourists Sfakia continues to embody authenticity ‘rooted in history and geography’ and provides a canvas to project their own ‘preoccupations about tradition and authenticity in the contemporary world’ (265).

As I finished reading the book, I was left with the thought that Tradition in the Frame, rich in its detail and sharp in its observations, not only provides a methodological toolbox for discussing local particularity without losing sight of global phenomena. It also offers a productive opening into how one might respond to the rising nationalisms that we witness in our contemporary world, where emphasis on ‘salvaging tradition’ from any outside influence often plays a prominent role. Rather than following this path, Kalantzis invites us to actively engage with tradition in all of its contemporary guises and to stay attuned to the many possibilities that such engagements hold.

Kristina Gedgaudaitė is a Mary Seeger O’Boyle Postdoctoral Research Fellow at the Seeger Center for Hellenic Studies, Princeton University, where she works on a project examining contemporary Greek comics and graphic novels as a site for both artistic innovation and social critique. She is the author of Memories of Asia Minor in Contemporary Greek Culture: An Itinerary and one of the cordinators of the cultural analysis network Greek Studies Now.