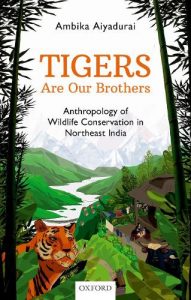 Most of the research on wildlife conservation ideally involves ‘the story of a charismatic species, the ‘‘new discovery’’ of a species, news about undocumented landscapes, and the use of high technology in studying wildlife’ (170). In Tigers are our Brothers, Ambika Aiyadurai offers the other side of wildlife conservation, its human side, at Dibang Valley district in the Northeast Indian state of Arunachal Pradesh. Having trained in wildlife biology before becoming an anthropologist, Aiyadurai points out that ‘science-based conservation practice does not acknowledge social issues, such as local needs, social inequality, and power relations’ (168).

As home to the Idu Mishmi tribe (a sub-group within the Mishmis), Dibang Valley is considered to be one among the 36 global biodiversity hotspots in the world. Tigers are our Brothers illustrates the conversations, connections, conflicts and negotiations between the Mishmis and conservation actors. Out of the many thoughtful themes that come out of this book, I discuss three here that would appeal to anyone interested in reading about or researching the region. These are the processes of undertaking fieldwork in Northeast India around issues of conservation; of unveiling a rich ethnography of the Idu Mishmis; and of pursuing identity preservation and development discourse through the politics of wildlife conservation.

Aiyadurai delivers a detailed description of her entry into Dibang Valley. She does not refrain from explaining the challenges of doing fieldwork as a lone female researcher, of not being taken seriously initially. Without a survey form, which was otherwise common with the wildlife conservationists visiting the valley, Aiyadurai’s expertise as a researcher was also questioned. She left it to time, engagement with the community and their non-native common link language, Hindi, to shape the course of her fieldwork.

While aware of her privileges, Aiyadurai acknowledges how fieldwork should not be done. She states that ‘the ‘‘fixation’’ with sample size made the fieldwork look like a ‘‘sampling’’ race to meet as many people as possible at the expense of the quality of the information, thereby treating people like data suppliers’ (29). This aligns with the perspective of wildlife biologists who lament the ‘data’ denied to them by the Mishmis (150). They were looked upon with suspicion as the community was never informed of the research based on the fieldwork that they had facilitated. It is extremely heartening to read Aiyadurai making return trips to her field site and the community taking pride in her work, being open to her as one of them rather than being treated as a guest or a stranger. 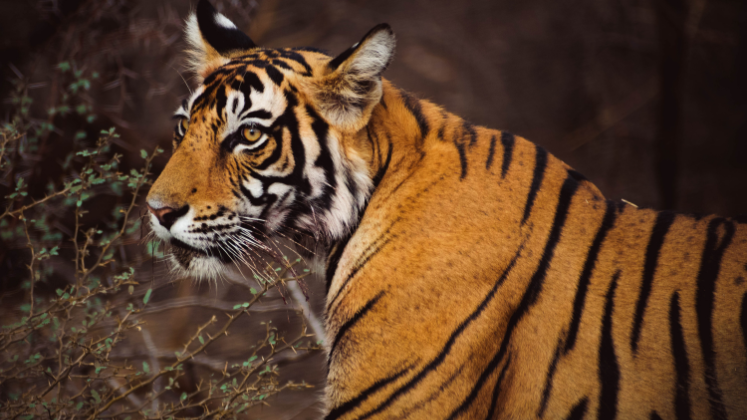 Aiyadurai begins by narrating how the rescue of four tiger cubs after the reported killing of their mother had made Dibang Valley the centre for research students, wildlife biologists and the conservation community who sought to map the tiger habitat and assess the tiger population (5). By the tigers being their brothers, the Mishmis marked the kinship that they shared with the tigers, highlighting that they would kill a tiger as a last resort and only when it was a threat to human life, cattle and property.

There were contestations regarding the pros and cons of turning the Dibang Wildlife Sanctuary into Dibang Tiger Reserve. While some defended it in the hope for ‘development’ through tourism and livelihood options, others opposed it for it might result in confiscation of land by the state, leading to development-induced displacement. What was being ‘written’ by the wildlife biologists thus mattered to the community. Aiyadurai succinctly states: ‘Any open discussion with the local residents may bring up uncomfortable questions about conservation and may possibly destabilize the long-held views of the conservation philosophy of ‘‘protectionism’’’ (171).

Tigers are our Brothers offers a detailed description of the precarious lives of the Mishmis as a borderland community. On the one hand, they are suspected of being allies of China; on the other hand, their skills and knowledge made them good guides and porters for the Indian security forces. Aiyadurai also highlights British writings that shaped perceptions of the Mishmi identity in both positive and negative lights. The book is nostalgia for anyone who has witnessed the display of traditional weapons and animal skulls, horns, legs, ivories or skin in their ancestral or village homes across Northeast India. These material cultures form a big part of one’s history, identity, privileges and memories where the cultural practices of the communities consider them legitimate and part of their being. This also speaks a lot to Indigenous ways of life as set against what is considered lawfully right.

The book also contains a very interesting account of hunting as a gendered practice of the community. It illustrates the connections of women to wildlife, not just the men to hunting, conservation or development. For instance, menstruating women cannot brew the local beer, touch the hunting kit or serve water or tea to the hunters when they return. In fact, hunting is avoided when one’s wife is menstruating (64). Women also cannot cook wild animals or touch the displayed animal skulls, which can only be cleaned by the men.

Aiyadurai mentions the social contract of the hunters and the spirits. She elaborates on the close relationship of the Indigenous community with the forests. For a curious reader, it would be interesting to know if she had ever accompanied or tried to accompany a hunting expedition. She was apparently considered an ‘outsider’ yet was offered wild animal meat that otherwise was not consumed by the women of the community. Were there other such instances in the field where the author, as the ‘lone female researcher’ as she was perceived, felt liberated or suppressed?

Initially, as a reader, I felt the tiger story came far too late in the book. However, the author gives enough context for understanding the human-nature relations through the narratives of Indigenous people and conservationists, where the latter claims a separation of human activities from nature. While the author in no way romanticises hunting, she explains conservation politics from the perspectives of the state, environmentalists, villagers and Indigenous Mishmi elites.

While the government facilitated lists of rare and endangered animals to receive the highest levels of ‘funding, protection, and visibility for research’ (120), the Mishmis have also claimed an ‘ecological identity’ for the community. This has emerged from the global environmental discourse on biodiversity conservation and recurring land conflicts (106). According to Aiyadurai, reclaiming an ecological identity by the Mishmis is a conscious effort to show that the community is sensitive to wildlife. For instance, the mithun, which is a domesticated and culturally valued animal of the Mishmis, was dropped from the logo of the Idu Mishmi Cultural and Literary Society (IMCLS) alongside the takin, which is a wild and vulnerable animal (113). For the Mishmis, dropping the mithun from the logo was important to erase the community’s involvement in the ceremonial sacrifices of the animal at a time when the region has a huge presence of wildlife NGOs. This selective conservation of the wild and the rare marks the use of animal symbols to create an ‘ecological identity’, just like recognising particular species as national/state animals globally.

Tigers are our Brothers may serve as an important starting point for future research on identity construction through biodiversity conservation, whereby specific animals are positioned as the centre of politics. This book is an incredible effort in writing about the region of Northeast India with care, and will surely be useful for conservationists and social scientists working across disciplines in our current times.

Dr Dixita Deka is a Postdoctoral Fellow at North Eastern Social Research Centre (NESRC), Guwahati. She holds her PhD in Social Sciences from the Tata Institute of Social Sciences, India. Currently, she is working around the issues of food sovereignty in the Eastern Himalayas.