Essay competition 2018 winner: “The cornerstone of democracy rests on the foundation of an educated electorate” – Thomas Jefferson

Essay competition 2018 winner: “The cornerstone of democracy rests on the foundation of an educated electorate” – Thomas Jefferson

“The cornerstone of democracy rests on the foundation of an educated electorate”. With the rise of fake news, historically low voter turnouts, and populist angst, to what extent is Thomas Jefferson correct regarding democracy in the twenty-first century?

This article was written by Gabriel Brown, year 12 student at Charterhouse school.

Recent years have seen many of the most contentious and highly debated elections in the history of modern democracy. With majorities of often less than a few percent, elections seem to reflect the state of divided nations more than the collective will of the people. Dating back to modern democracy’s founding father, Thomas Jefferson remarked on education’s role in our democratic system, stating “an educated electorate is the cornerstone of democracy”, and the value of education in all nations still takes centre stage as an important part of national development today. In this essay, I will consider how, and if, an “educated” portion of an electorate exists and contributes to democracy, and how; antagonistically, ignorance serves to affect it.

As a conceptual model, in his essay The Myth of the Rational Voter: Why Democracies Choose Bad Policies, Caplan (2007) proposes that solely an educated subset of electorate decides the outcome of democratic referenda. Caplan suggests that if members of the electorate are given a choice between voting for candidate “X” or “Y”, of which policy they know nothing about, the vote share will be roughly evenly split. In order to break this negation, a subset of an electorate, which is informed enough to cast a meaningful vote, is needed. This theory states that, if 99% of an electorate does not hold a sufficient level of political education or knowledge to cast a meaningful vote, only the remaining, knowledgeable 1% of the electorate will vote in an impactful way, effectively deciding the result of an election or referendum.

It is, however, expected that an election would not actually result in an outcome such as this. Caplan’s conceptual model does not account for multiple variables, such as the varying levels in political education, with individuals of an electorate rarely or never being completely ignorant or entirely knowledgeable. In addition, seemingly with the rise of embellished and falsified articles of media, dubbed “fake news”, designed to influence voting and electoral knowledge (Kurtzleban, 2018), it is not surprising that, in reality, results of elections look very different from the theoretical model.

In an attempt to investigate this theory, figures are used from the United States’ Congressional Election of 2016. In total, six Congressional Districts are used, reflecting both the three most, and least, educated areas of the United States, based on the percentage of adults with university degrees, or using the U.S. Education Index. 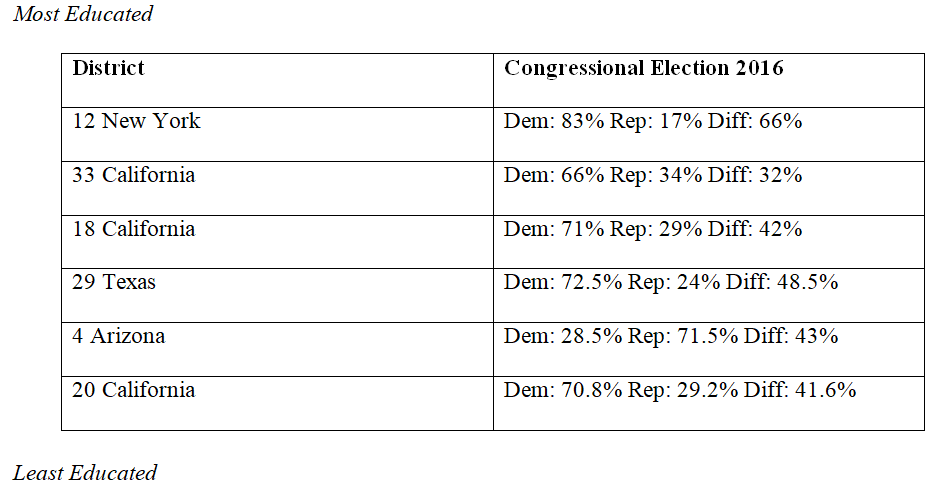 In juxtaposition with the theoretical model, the actual results of the 2016 Congressional Election seems to present a different story of electoral voting traits, in which both educationally polar districts are equally decisive.

To understand these voting patterns in a more practical manner, the parameters of “education” and “ignorance” should first be defined. It is impossibly hard to provide a universal definition of political “education” and “ignorance”, when the terms themselves are subject to political culture, policy, subjection and an infinite number of determining variables. With this in mind, I will consider the following axioms for the next portion of this essay:

The United States’ Congressional Election was inextricably linked with the General Election, being one of the most contentious in recent years. As Kabaservice (2017) analysed shortly before Donald Trump’s inauguration, both Trump and the Republican party had placed belief in a “hidden majority”, composed of individuals disgruntled by seemingly being “ignored and even despised” by the political elite, to vote against Hillary Clinton, who for many epitomised the old-age political elite, whilst Donald Trump, the populist saviour. As Kabaservice (2017) put it best, “Trump is not in any meaningful sense a conservative; he is rather, a populist”.

This awe-inspiring break from traditional politics was combined with immensely low turnouts of citizens voting. In the States comprising the three lowest educated districts, turnout is at some of the United States’ lowest figures (Figure 2).

States that typically voted for populist candidates had turnouts well below the national figure. This evidently shows that Trump’s belief in a “hidden majority” is well-founded and that the populist subset had been successfully mobilised and enthused, replacing themselves as the cornerstone of democracy. Education (and ignorance) are being replaced by populism, and candidates who inspire and excite their supporters the most will most likely succeed.

A discourse, The Macroeconomics of Populism (Dornbusch and Edwards, 1991), reports that historically populist measures are economically dangerous , yet, due to the barrage of well-timed fake news designed to influence voters – the economic and political ramifications are often forgotten and buried beneath untruths. The term “irrational voters” is generally used to describe individuals who do not vote according to a well-rounded analytical decision, but increasingly it seems to be befitting of the current political climate, in which swathes of the electorate are coerced to vote for a candidate, without the ability to analyse and balance their opinions.

Since Thomas Jefferson remarked on the place of education in a free, democratic world some two hundred years ago, its central issues seem to have changed dramatically. Whilst education will remain a core issue for freedom and democracy for all nations, the question over whether education is the cornerstone of democracy has altered dramatically and whether democracy relies on an “educated electorate” seems to have been made irrelevant. Quality of policy and proposal seems to have been replaced by the most awe-inspiring candidate, with the highest reactionary-message, who are able to excite their base of supporters most. I believe the question has evolved into its dangerous counterpart, whether in fact, democracy rests in the hands of those who shout loudest.

Dornbusch R. and Edwards S. 1991. The Macroeconomics of Populism. Illinois: The University of Chicago Press.

Downs. A, 1957. An Economic Theory of Political Action in Democracy. Chicago: The University of Chicago Press.

Kabaservice G., 2017. ‘Wild populism has a long history in US politics, but Trump is surely unique’. The Guardian. <https://www.theguardian.com/commentisfree/2017/jan/15/wild-populism-long-history-us-politics-trump-surely-unique> [Accessed 31st August 2018]