Syria can be described as both a refuge state and a refugee producing nation. This modern historical fact has had a profound influence on the way that neighbouring states and their people have responded and reacted to the current humanitarian crisis. The international humanitarian aid regime in its 21st century incarnation has again been caught out, unprepared and curiously unresponsive to the perceptions and aspirations of both those seeking refuge and the host communities providing it. This paper sets out to explore the disparity in perceptions and aspirations among forced migrants, members of hosting communities and humanitarian aid practitioners and policymakers. It is based on fieldwork in Turkey, Lebanon and Jordan between September 2014 and September 2015.

The Making of a Refuge State in Syria

Five times in modern history, Syria and its peoples have received and accommodated massive influxes of forced migrants. In the 100 years between 1850 and 1950, Syria received several million forced migrants from the contested borderlands with the Imperial Russian and Ottoman Empires. At the close of the Crimean War (1853–1856), and the following two Ottoman–Russian Wars in the 1860s and 1880s, more than 3 million forced migrant Tatars, Circassians, Chechens, Abkhaza, Abaza, and other related ethnic groups entered the Ottoman provinces of Rumeli (the Balkans), Anatolia, and the Arab regions of Bilad al Sham (Greater Syria).

As World War I drew to a close, as many as half a million Armenians found refuge in Syria settling among their co-religionists in Aleppo, Damascus and Beirut. When the modern Republic of Turkey was established in 1923, 10,000 Kurds from Turkey fled across the border into Syria, choosing to escape from the forced secularism of Kemal Ataturk’s new Turkey. The Inter-War French mandate over Syria saw a continuation of these processes, with waves of Assyrian Christians entering the country in the 1930s seeking asylum and safety after the British had given up their mandate over Iraq in 1932. All these forced migrants were granted citizenship in the new Syrian state. And then, in the late 1940s, Syria was the safe harbour for over 100,000 Palestinians fleeing the ‘Nakba’ at the time of the creation of the state of Israel. Between 1975 and 1989, Syria harboured hundreds of thousands of Lebanese fleeing civil war in their homeland. It is hardly an exaggeration to say that the modern ‘truncated’ Syrian state, carved out of Greater Syria by the League of Nations in 1920 and granted full independence in 1946, was a place of refuge for hundreds of thousands, if not millions, of ethno-religious groups uprooted from their homelands near and far as a result of war, arbitrary lines drawn across maps, and ethno-sectarian strife.

In the summer of 2006, Syria admitted over a million Lebanese refugees when Israel invaded south Lebanon. A year later the steady trickle of Iraqis seeking refuge in Syria became a flood when over 1 million Iraqi refugees entered the country and were hosted as ‘temporary guests’ and brother Arabs. As long as they and other refugees from Afghanistan, Sudan, Somalia, and Eritrea conducted their business without crossing any Syrian Baʿathist state ‘red lines’, they were tolerated and treated in much the same manner as Syrian citizens. The Syrian institution of hospitality meant that, until 2011, the international humanitarian aid regime did not have to deal with a mass influx into Europe of Iraqi or other refugees from the Arab world.…continue reading

Dawn Chatty is Emerita Professor of Anthropology and Forced Migration and former Director of the Refugee Studies Centre at the University of Oxford. She tweets at @nouraddouha. 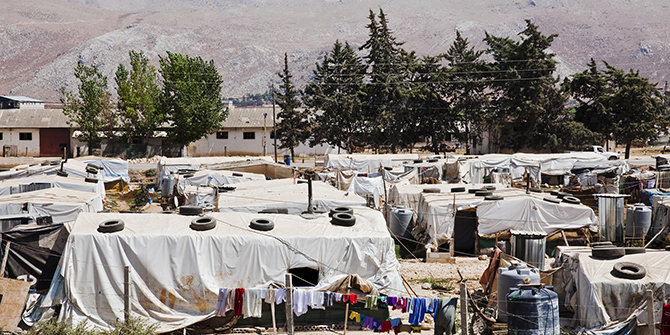