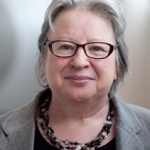 ie Marsh discusses the research she conducted about augmented reality apps, investigating their use, value and potential for young children. She urges that as these apps become increasingly ubiquitous, it will be important for parents and early years practitioners to appraise and assess the apps and decide whether they are of fleeting interest, or if they hold the potential to extend children’s thinking and imagination. Jackie is based in the University of Sheffield where she researches young children’s digital literacy practices in homes, communities and early years settings. Jackie has conducted research projects that have explored children´s access to new technologies and their emergent digital literacy skills, knowledge and understanding. [Header image credit: J. Marsh]

Augmented Reality (AR) consists of a blend of the physical world and virtual world. In this blended reality, three-dimensional images or environments are projected onto a physical object. The technology is not new, having been around since the 1960s, but tablet apps are now enabling children in contemporary society to engage in a range of AR experiences.

One of the most recent releases of an AR app, produced by Osmo, enables children to run a pizza shop, developing entrepreneurial skills as they do so. The tablet camera is used to recognise physical objects placed on top of a cardboard pizza that is placed in front of the tablet, and virtual customers let the player know if she or he has their pizza order correct. It promises to be a popular app, but questions remain about the quality and value AR apps for young children, given their relatively recent entry into this market.

In a research project undertaken last year*, I worked with a team exploring the potential apps had for enhancing the play and creativity of children aged under 5. We included a number of augmented reality apps in the study, given that little was known about their use with this age group and there was, therefore, a need for parents and teachers to be able to evaluate their potential value for young children.

We undertook a survey of 2000 parents of children aged 0-5 in the UK who had access to a tablet. A sizeable minority of parents reported in the survey that their children used AR apps (24% in total, 18.5% on tablets and 5.9% on smartphones), while this figure is likely to have increased over the past year. As part of the study, we filmed children using AR apps and analysed the data to identify how far they promoted play and creativity. The AR apps that were reviewed were: AR Flashcards; Aurasma; Quiver (previously ColAR); Mattel Apptivity (Fishing Game); Meet the Animals; Squigglefish.

The types of play promoted by the apps were identified, using a classification system adapted from the playworker, Bob Hughes’ work, and creative thinking was traced through the use of Robson’s ACCT framework. We found that the apps varied in terms of how far they promoted play and creativity. Some of the apps allowed the children to do little more than bring characters ‘to life’, by holding a tablet over a 2D drawing in order to view a 3D representation (see header image).

Whilst the children loved this due to its novelty, the app did not enable the children to do anything else. In contrast, the app Aurasma was found to engage children in a broader range of types of play and creative thinking. The app allows users to link a video or audio podcasts to a 2D artefact, such as a written text. The school involved in the project, Monteney Primary School, made great use of this app by staging an exhibition of children’s work for parents, in which parents could hold their smartphones up to children’s written comics on the walls, and use the Aurasma app to view videos of the children talking about their productions. Signs around the school (see Figure 1) alerted both children and parents to the presence of work that linked to virtual productions.

We only have to consider the appeal of the Pokémon Go app to recognise that augmented reality apps can capture children’s imaginations. These apps certainly have potential to motivate young children and engage them in a range of activities that enhance play, creativity and learning. However, as suggested, our study found that the extent to which the apps could do that was dependent upon their design. Based on our work, we drew up some guidance for both parents and early years practitioners on choosing apps, the latter of which contains brief reviews of the AR apps we studied.

Of course, it may be the case that the development of new AR apps for children is overshadowed by the rapid production of Virtual Reality (VR) toys and games, with VR technology now being so widespread that it has even been adopted as a cereal toy. However, the two types of technology do offer very different experiences, which suggests that they will both have significant roles in young children’s play futures.

Whatever new developments occur, it will be important for parents and early years practitioners to take time to appraise the apps, toys and games that appear in order to determine whether or not they will be of fleeting interest, offering only a superficial engagement with the virtual, or whether they have the potential to extend children’s thinking and foster their imagination and creativity. Of course, children themselves will also make these kinds of judgements as they encounter new apps, but parents and teachers can help by guiding children to good quality apps in the first place.

There are organisations that offer guidance on choosing apps, such as Common Sense Media and the National Literacy Trust, and sites run by children’s media experts and commentators Stuart Dredge  (apps playground) and Warren Buckleitner (Children’s Technology Review Exchange).  These can be a helpful source of information for parents and teachers alike. However, we look forward to the development of sites in the future in which young children themselves can share their thoughts on the apps they use, including their AR apps!

* *The report on the full study, ‘Exploring Play and Creativity in Pre-School Children’s Use of Apps’, funded by the ESRC (Grant Number ES/M006409/1) can be downloaded here.