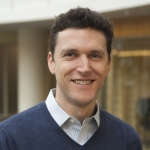 How has children’s media use evolved over time? Common Sense Media published their latest zero to eight study in October, and in this post Michael Robb discusses the key findings. Michael is director of research at Common Sense, overseeing the research program, evaluation of organization impact, and program development research. He has published research on the impact of electronic media on young children’s language development, early literacy outcomes, and problem-solving abilities in a variety of academic journals. [Header image credit: Gordon, CC BY-SA 2.0]

My kitchen counter has changed a lot over the last six years. What used to be dedicated to a bowl of fruit, a coffee maker, various papers, and mail that I haven’t gotten around to throwing away yet, has become a mess of wires coiling back to one put-upon outlet. A rotating set of smartphones, tablets, Bluetooth speakers, and headphones have made their way to the counter as well, pointing to a broader set of changes in the house. Our family, which includes a 5-year-old and 3-year-old, has a lot of mobile device stuff. And we aren’t the only ones.

October marked the release of the third wave of the The Common Sense Census: Media Use by Kids Age Zero to Eight, an ongoing series tracking the use of media and technology among U.S. kids. Beginning in 2011 and repeating again in 2013, these surveys offer us a once-in-a-lifetime look to see how new technologies have been enmeshing themselves in our children’s lives. Based on a nationally representative sample of more than 1,400 parents from all over the country, the survey paints a complex portrait of increasingly mobile families. Some of the key findings include:

The world has changed a lot since 2011, and my kitchen counter reflects that. Every bit of research about children’s media habits helps us better understand the world they are growing up in. Mobile devices are popular with kids, just as they are with adults, making it all the more important to set a good example. That could mean putting your device away at dinner or turning off screens a little earlier before bed. There are tons of great TV, apps, and other media for kids under the age of 8, so when they’re using media, try to steer them toward the good stuff.

And finally, though we’re only beginning to understand the impact of new technologies in family life, there’s plenty we know about how to support young kids’ healthy development. Talk with them, ask questions, give them lots of experiences in the real world. And have them tell you about what they’re watching and playing — it’s a great way to make media experiences more meaningful.

This text was originally published on the Common Sense Media blog and has been re-posted with permission.

Are schools the safe space to err and explore?