Today the UN Committee on the Rights of the Child is publishing its General Comment 25 on children’s rights in relation to the digital environment, along with versions for children and young people, explanatory notes and the results of the global children’s consultation conducted to inform the drafting. Professor Sonia Livingstone, who is speaking today at the launch event, explains the significance of the General Comment adopted on the 4th February 2021 and why it is a game-changer for realizing children’s rights in a digital world.

To some, this is obvious: human rights apply online as offline, and children are people, ergo children’s rights apply in the digital world. To others, this is a problem. I’ve heard it said that children should not be on the internet. That parents should keep children away from everyone else online. Or, while acknowledging that children are one in three of the world’s internet users, that governing the internet in their best interests is too difficult, expensive and impractical.

In February the UN Committee on the Rights of the Child adopted General Comment 25 on children’s rights in relation to the digital environment. This is an exciting opportunity to make real the claim that rights apply online as offline, and it has been long in the making. 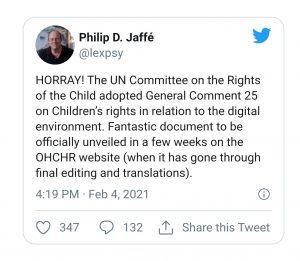 In relation to the digital environment, it’s a game-changer. The General Comment will land on the desk of every government in the world. It clarifies what the digital environment means for children’s civil rights and freedoms, their rights to privacy, non-discrimination, protection, education, play and more. It also explains why States and other duty bearers must act and, within the limits of 10,700 words, how they should act.

To explain a little, as the primary duty bearer, the State is accountable for the provisions of the UN Convention on the Rights of the Child (UNCRC) and it must report periodically on how it has met these obligations to the Committee as the treaty body. States are also obliged to ensure that all duty bearers within their jurisdiction meet their responsibilities to children’s rights – including businesses and others whose activities significantly impact on children.

A General Comment is an authoritative document which sets out how the UNCRC should be interpreted and implemented by States – in this case, in relation to the digital environment. Like the Convention itself, a General Comment must apply in wealthier and poorer nations, to governments of all political stripes, and for all children whatever their abilities or circumstances.

Article 12 of the UNCRC is the child’s right to be heard in matters that affect them, and to honour this, the drafting team consulted children around the world, especially in the Global South. Children had a lot to say, and many insights to contribute, and these were carefully considered in preparing the General Comment. On behalf of the Committee, Amal Aldoseri, Olga Khazova and Philip Jaffé thanked the 700+ children from 27 countries for their consultation responses.

Of course, now the real work begins. But it’s good to have our bearings, and our mandate, in terms of what, why and how.

This text was originally published on the Media@LSE blog and has been re-posted with permission and small amendments. 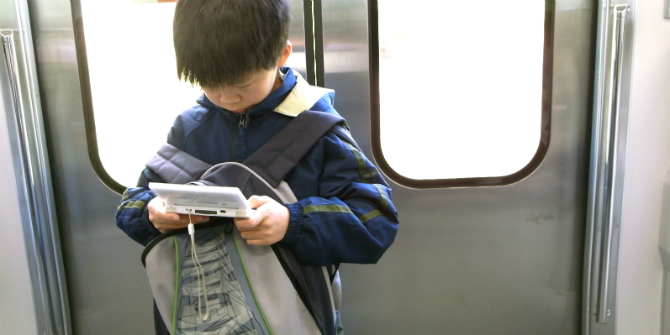